Artificial intelligence is poised to fundamentally change how we live and work. Whether it will be salvation or curse will depend on the extent to which we get to grips with it now

It is the dawn of a new age, when everything from climate change and the state of our cities to our personal health and wellbeing will experience dramatic improvements at a speed and scale beyond anything achieved to date.

It is a looming apocalypse, morphing beyond all human control, that could wipe out civilisation as we know it within our lifetimes.

It is humanity’s redundancy notice, poised to wipe out vast numbers of jobs.

It will generate vast numbers of new jobs and business opportunities, while freeing people from the drudgery of hazardous or boring work.

Depending who you talk to, “it” could be all of these things, or at least toned down versions of them. We are talking, of course, about artificial intelligence: the rapidly growing ability of computers to imitate, and improve upon, many of the core functions of the human brain.

And to echo an earlier slogan of one of the companies involved, it changes everything.

AI’s power is amplified by the way it combines with – and in many cases enables – innovations such as cloud computing, the internet of things and automation, and its ability to harness the vast amount of data now available on everything from energy use to individual tastes.

This has the potential to revolutionise industries as varied as finance, retail, healthcare and agriculture. It can speed the automation of whole swathes of the economy, from insurance to transport, controversially stripping out the need for human involvement in a wide range of processes. And it holds out the promise of reducing waste and pollution, and accelerating the shift to renewable energy and the circular economy.

Among the applications are self-driving cars, automated factories, super-sophisticated personal healthcare, fraud detection and prevention, and remote, precise monitoring of everything from deforestation and pollution to pests and diseases. 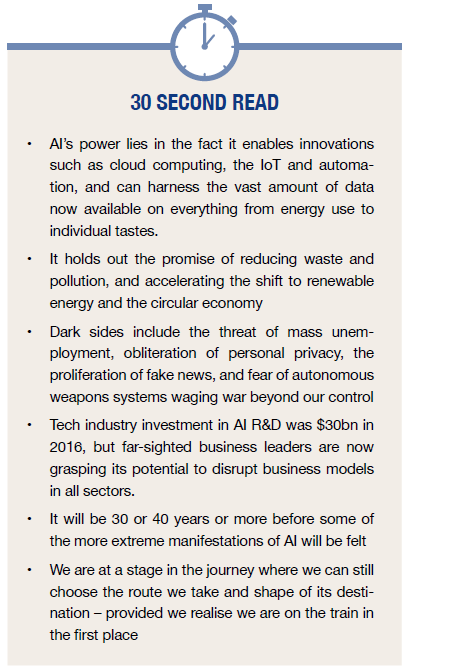 And there are the darker sides.  The threat of mass unemployment; the obliteration of personal privacy; and the proliferation of fake news and the infamous “bubble”, as content providers become ever better at telling us only the things we want to hear – or those that might trigger us to spend money to their benefit.

Then there is the remorseless rise of “black box” decision-making, where AI machines reach conclusions that may have far-reaching effects on our lives – whether we’re shortlisted for a job, offered a loan, or allowed into a country, say – without us being able to understand why, or even discover how they were arrived at. Such a process can unwittingly incorporate all sorts of bias; there have already been several well-publicised instances in the US.

And most alarming of all, the fear of autonomous weapons systems waging war beyond our control; and of the rise of an artificial “super intelligence”, which may not have humanity’s best interests at heart.

They think they’re born for this. If the point of business leaders is to manage times of disruption, then this is it in spades

Salvation or curse, the tech industry as a whole is betting big on AI. According to McKinsey, it spent up to $30 billion on R&D in 2016 alone. Now the ripples are spreading beyond the tech loop. Far-sighted business leaders, observes Lucy Parker, partner at the Brunswick Group, are just beginning to grasp both the scale of this potential, and its power to disrupt existing business models. Parker recently interviewed 16 CEOs for the British Academy’s Future of the Corporation initiative, and was struck by their near-unanimous sense that something momentous was under way. 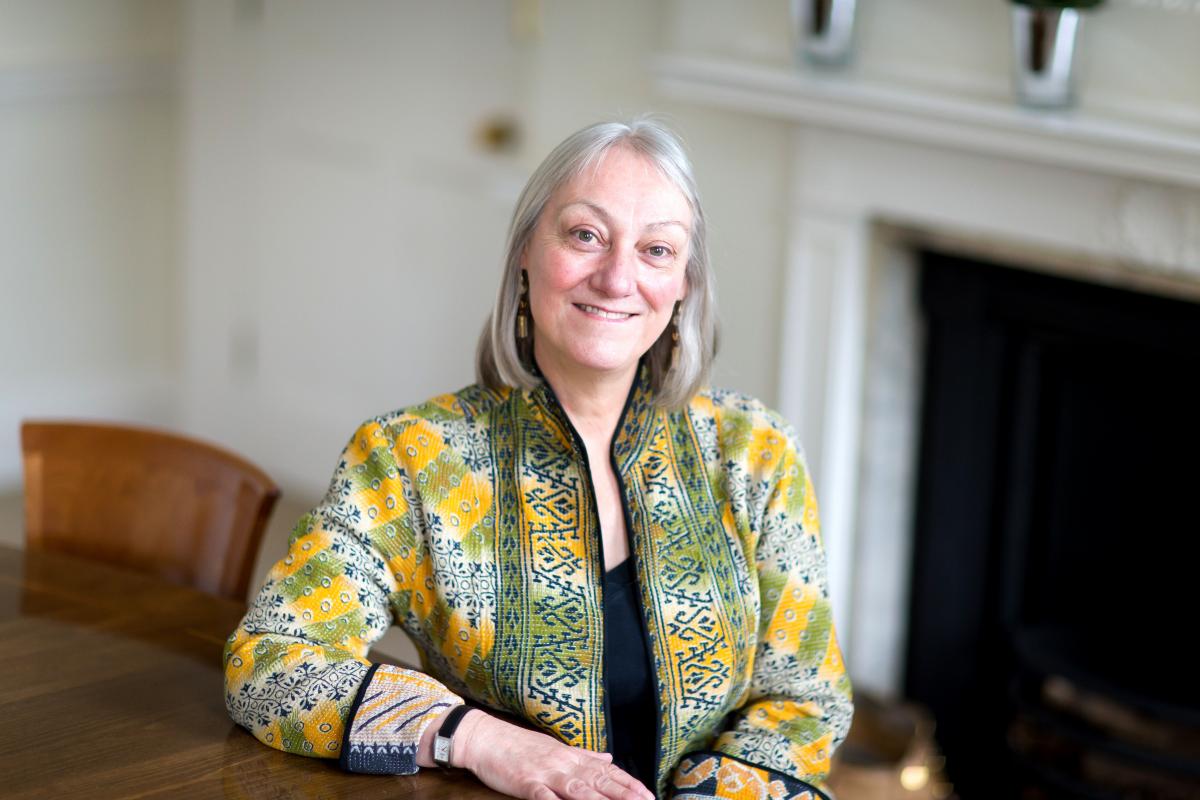 So how do they respond – with panic or excitement? Both, says Parker. “There is a sense of rising panic on one hand, but on the other, definitely excitement. They think they’re born for this. It releases the animal spirits. If the point of business leaders is to manage times of disruption, then this is it in spades.”

It’s still early days. We’ve yet to see full industrialised production of this technology. There’s plenty going on in the sandbox, but it’s not scaled yet

Some of those disruptions are happening right now, all around us. As Kate Rutherford of the AI Now Institute, based at New York University, observes: “Early-stage AI systems are being introduced simultaneously across multiple areas, including healthcare, finance, law, education, and the workplace. These systems are increasingly being used to predict everything from our taste in music, to our likelihood of experiencing mental illness, to our fitness for a job or a loan.” Consumer applications abound, from Alexa and Siri to Shazzam and Netflix – and, of course, the wider world of Google and Facebook.

Further developments in AI are coming fast down the line, but not all are imminent. And some of the more extreme possibilities that are part of feverish speculation now may not even begin to manifest for 30, 40 years or more. As PwC’s AI lead, Rob McCargow, says, “It’s still early days. We’ve yet to see full industrialised production of this technology. There’s plenty going on in the sandbox, but it’s not scaled yet.” 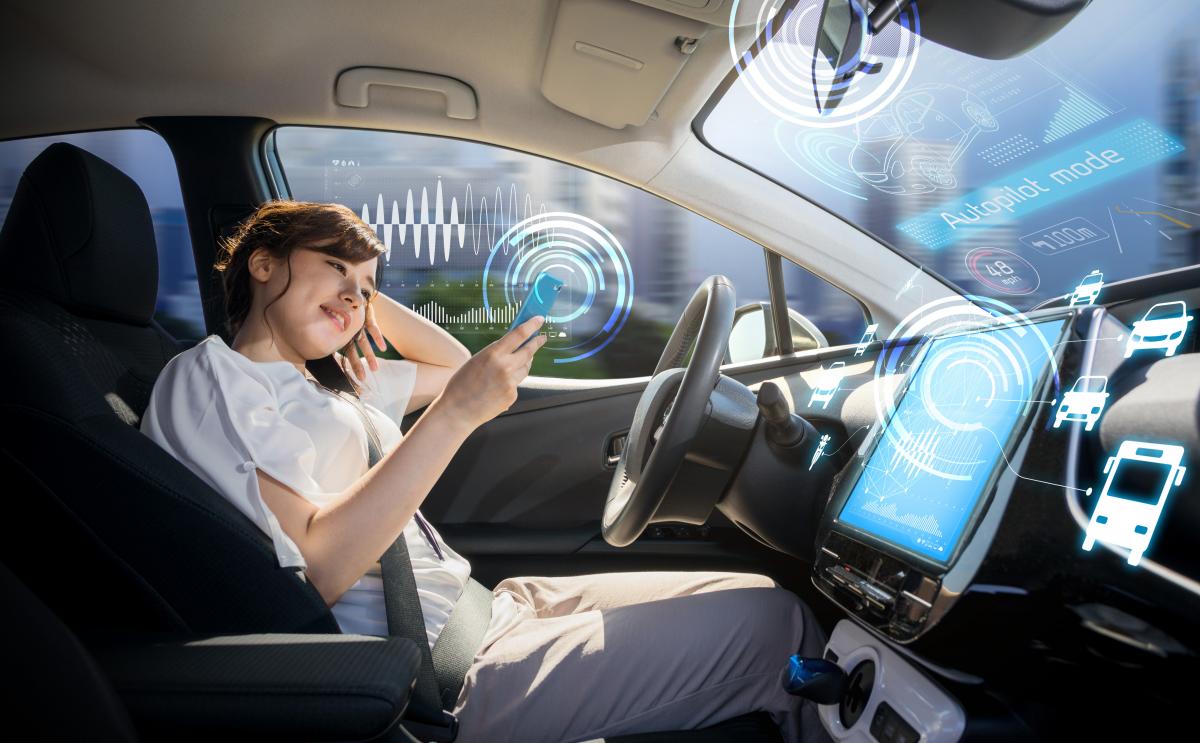 We have a window of opportunity to shape AI for good (credit: Chombosan/Shutterstock Inc)

To coin a phrase used by several of the experts I spoke to for this feature, one thing is certain: the train has left the station, and there’s no going back. However – to extend the metaphor - it hasn’t gone all that far down the track. And this isn’t – yet – a runaway train, out of our control. Rather, we are at the stage of the journey where we can still, to a large extent, choose the route we take, and shape its destination. Assuming, that is, that we realise we’re on the train in the first place. That we are aware, in other words, of the momentous journey we’ve embarked upon, and the changes it will bring.

In short, we have a window of opportunity to shape AI for good. But first we need to understand what it is, how it works, what are the risks and where are the opportunities. And then we need to decide how best to govern and control it.

For anyone involved in business and sustainability, these should be priority tasks. It might be tempting to ignore them in favour of more pressing concerns, not least because AI can – especially when sensationalised by the media –  sound like so much sci-fi. But that would mean both taking our eye off some pretty hefty risks, and missing out on some tremendous opportunities for a step change on the path to a sustainable future.

In this month's briefing we explore what those risks and opportunities are.

Brand Watch: Rise of the robots as companies turn to AI...
How people and the environment are finally part of the ...
Lady de Rothschild’s road to the Vatican
CBI calls for urgent action to tackle white male syndro...
comments powered by Disqus