Brand Watch: Corporates in push to take their suppliers on net-zero journey

The CEOs of big brands were out in force at COP26 in Glasgow, not only in the blue and green zones but at side events throughout the city. Far less in evidence, however, were their smaller peers

So far only 2,700 small companies have signed up to the SME Climate Hub, which was launched last year by the UN’s Race to Zero campaign, the We Mean Business Coalition and the International Chamber of Commerce, and the Exponential Roadmap Initiative.

Yet with supply chains accounting for 5.5 times as much emissions as in companies’ direct operations, for global brands to stand a chance of delivering on their climate ambitions, the active participation of the millions of companies in their supply chains is an absolute must.

“Small- and medium-sized companies are the mainstay of supply chains, inextricably linked to the climate actions being taken by thousands of larger businesses who have committed to net-zero emissions by 2030,” said Giulio Berruti, climate change director at the industry-led membership group, BSR.

The 10% here is like preaching to the choir, so we need the other 90% to join us

Berruti was speaking ahead of the launch of a new collaborative platform, which has been designed to help brands bring suppliers on their net-carbon journeys.

The 1.5C Supplier Engagement Guide sees participating brands, including BT, Unilever, Ericsson and IKEA, agree to openly share tools and strategies for promoting climate action among small- and medium-sized enterprises (SMEs), as well as case studies of such approaches leading to success.

Explaining the rationale of the initiative, Mats Pellbäck Scharp, head of sustainability at Ericsson, said: “We realised that in these meetings [COPs] we were always the same companies and organisations. The 10% here is like preaching to the choir, so we need the other 90% to join us.” 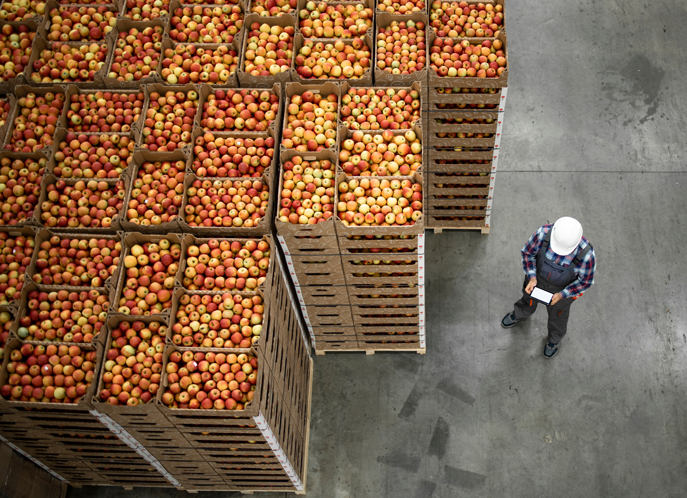 Among those contributing their insider tips are members of the 1.5C Supply Chain Leaders group, all of which have committed to halving emissions in their supply chain by 2030.

Unilever, for example, has begun to roll out a programme of providing hands-on support to the 300 suppliers it sees as having the most significant impact on climate change. The Anglo-Dutch consumer goods giant argues that it is now well-placed to pass on learnings from cutting its own direct emissions (down by 74% since 2009) to others in its supply chain and beyond.

“The nice thing is that your scope 3 (indirect emissions) is usually someone else’s scope 1 and 2 (direct emissions), so we think we have a good plus-and-play model because we’ve been working for 12 years to cut our own carbon footprint,” said Marc Engel, Chief supply chain officer at Unilever.

When it comes to supply chain emissions, the challenge is arguably greatest among the food and drink sectors

As part of the framework, SMEs have access to a carbon calculator tool, which shows average industry emissions from companies in users’ specific sector and country. A more advanced version of the free tool will facilitate the calculation of SMEs’ own carbon footprints. This updated iteration, which is being developed by Stockholm AI-driven climate accounting specialist Normative with support from Google.org, is expected to be ready for launch in early 2022.

When it comes to supply chain emissions, the challenge is arguably greatest among the food and drink sectors, which have millions of smallholder farmers in their supply chains, as well as SMEs. 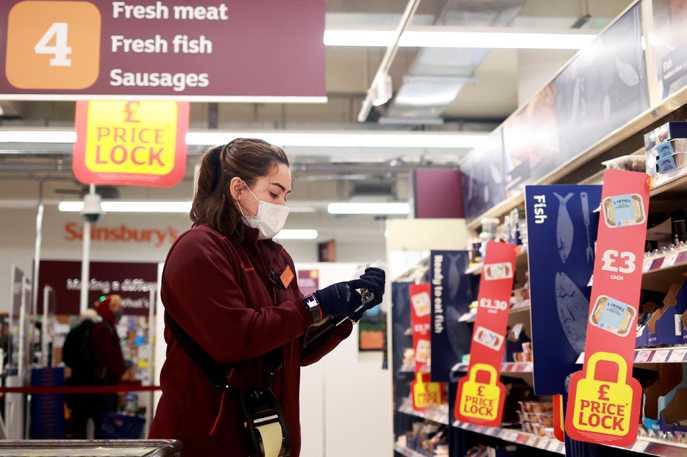 Sainsbury’s declared ‘we need to help lead the way’ at the COP26 summit. (Credit: Hannah McKay/Reuters)

COP26  saw a similar commitment from 10 major agribusiness brands (including commodity traders Olam, Cargill, Bunge and ADM). The group members promised to publish a “shared roadmap” as to how they would align their supply chain to a 1.5C target by COP27 in 12 months’ time. Eyes are also on the UK supermarket industry, which used the Glasgow conference to halve its cumulative environmental impacts by the end of the decade. Simon Roberts, chief executive of Sainsbury’s, one of the five mega food retailers involved (others include Co-op, M&S, Tesco and Waitrose), said that as “a business with a global supply base, we know we need to help lead the way”.

Testing that appetite for leadership will be environmental groups, which note that global food production accounts for more than one third (35%) of all greenhouse gas emissions. It’s not just agriculture, either.

The continued dependence of food and drink brands on plastic packaging is also a major contributor to both climate change and environmental pollution. Trash collection by global volunteers pinpoints Coca-Cola, PepsiCo, Unilever, Nestlé and P&G as the worst offenders, Break Free from Plastic’s latest report reveals.

The fashion industry is finally pulling up its socks. Three years on from announcing a charter on climate action, a UN-endorsed group of 125 clothing and footwear brands used COP26 as a handy peg for a progress update.

The results are a mixed bag, varying from the impressive (brands collectively worth $450bn in annual revenues now involved) to the hopeful (60% of signatories achieving a recent reduction in emissions) to the distinctly mediocre (only 55% reporting publicly to transparency expert CDP).

Most of the industry’s carbon-cutting attentions have focused on scaling up energy-efficient solutions, introducing renewable energy, phasing out coal and sourcing low-carbon material alternatives. 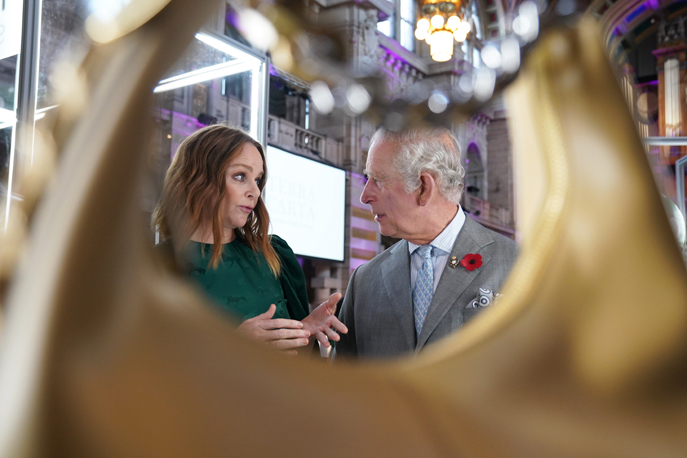 Yet, by the group’s own admission, garment production is predicted to grow, “translating into rising emissions” even with cleaner energy sources – a finding echoed by consultancy firm McKinsey’s latest annual State of Fashion report.

Curiously low on the list of possible new directions for the sector is regenerative agriculture, which the group classifies as one of several “major uncertainties”. Most of all, the industry group worries about the “untested” and “unverified” nature of emission mitigation efforts through alternative (read: non-fossil-fuel intensive, more nature-based) production methods.

A clutch of fashion brands, including Burberry, agreed to help reverse the decline of nature by 2030

The hesitation is curious not least because of the flood of pro-nature announcements by fashion brands during the Glasgow summit. High-end label Burberry, for instance, unveiled a new biodiversity strategy that puts nature-based solutions at the heart of its pledge to become climate positive by 2040. Burberry is also among the latest group of companies to join the Leaf coalition (see Can the world turn a new Leaf in the battle against deforestation?)

In a move that echoes luxury fashion house Kering, the UK clothing brand will use its relatively new Regeneration Fund to restore threatened ecosystems in its supply chain. As for concerns about effectiveness, Burberry says it is following strict internal funding guidelines developed with expert advisory firm The Biodiversity Consultancy.

Ralph Lauren is pursuing a similar, if somewhat more hands-off, strategy. The charitable foundation of the U.S. fashion giant is giving a $5m donation to the Soil Health Institute to launch a farmer-facing initiative to promote sustainable cotton. A central goal of the U.S. Regenerative Cotton Fund will be the adoption of regenerative practices, such as cover cropping and no till.

A clutch of fashion brands (including Burberry) also agreed to help reverse the decline of nature by 2030 as part of the UK government-backed Get Nature Positive campaign. The initiative, launched at COP26’s Nature Day early in November, is supported by a booklet geared to “inspire” action by businesses. Included among the case studies (which have support from the British Fashion Council and the Textile Exchange, among others) is a woodland-based sequestration project run by British clothing brand FatFace.

Developed in conjunction with WWF, Stella McCartney and the Textile Exchange, it is initially being trialled by a group of fashion brands including H&M, Adidas, and Allbirds. A full industry version is expected to be available next year.

Typically, companies that make progress on any of the metrics we evaluated also make an effort to report such progress

The tool will come none too soon as fashion brands continue to face criticism for environmental harm in their supply chains. The latest excoriation comes from U.S. campaign group Stand.earth, which accuses leading members of the UN-backed Charter on Climate Action for “little or no progress” made on eliminating fossil fuels from their supply chains.

The criticism is based on findings of the organisation’s Fossil Free Fashion Scorecard, which was released in August. The study analyses the performance of 47 top fashion companies, of which 19 are scored with the lowest ‘F’ ranking – including high-street brands such as Primark, Marks & Spencer and Uniqlo.

Stand.earth’s senior climate campaign Muhannad Malas concedes that the conclusions are based exclusively on publicly available information, opening the possibility that the dismal scores are for lax reporting rather than poor performance. That said, Malas notes that “typically, companies that make progress on any of the metrics we evaluated also make an effort to report such progress”.

The environmental group is calling on the fashion industry to ban the use of coal-generated electricity in its manufacturing processes, engage with host governments to increase renewable energy supply, and reduce fossil fuel-derived fabrics such as polyester, among other demands.