Terry Slavin reports on the findings of the World Benchmarking Alliance’s first assessment of how the world’s biggest food producers, restaurants and retailers are performing on the SDGs

A new benchmark from the World Benchmarking Alliance finds that only 26 of the world’s 350 most influential food and agriculture companies are working to reduce greenhouse gas emissions in line with the Paris Agreement – despite the fact that the sector accounts for about one-third of global emissions.

The 2021 Food and Agriculture Benchmark, published ahead of last week's UN Food Systems summit, also finds that 309 of the 350 companies assessed aren’t doing enough to eliminate forced labour, while 201 are failing to prioritise healthy foods.

Unfortunately, after leadership at the top, you see scores very rapidly decline

London-based WBA said this is the first benchmark to assess the entire food value chain on their alignment with the Sustainable Development Goals (SDGs). The 350 companies assessed account for more than half the global food and agriculture revenue, directly employ more than 23 million people, and have an impact on many of the world’s 500 million smallholder farmers through their supply chains.

Unilever, which this month announced a new programme to encourage its suppliers to publicly commit to halving their emissions by 2030, leads the benchmark, while Nestlé, Danone, Moroccan fertiliser firm OCP, and Anheuser-Busch InBev, respectively, are the other companies to make the top five. They are followed by PepsiCo, Tesco, New Zealand dairy cooperative Fonterra, Diageo and Swiss flavouring company Firmenich.

Viktoria de Bourbon de Parme, food transformation lead for WBA,  said the only segment of the value chain not in the top 10 were restaurants and food service providers, with French catering company Sodexo the highest scorer, at number 30. 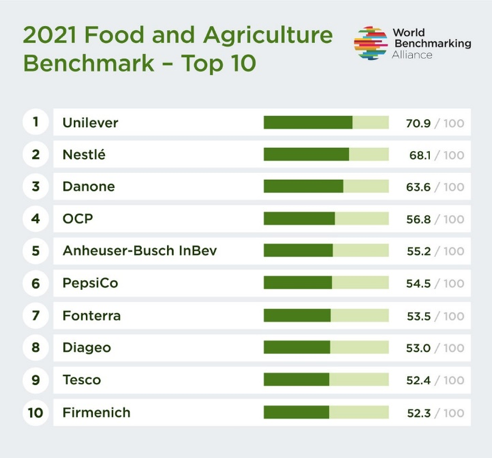 Burger King owner Restaurant Brands International (159), and Subway Group (247) were among the 229 companies that failed to score above 20.

One of the key areas where companies come up short is in tackling deforestation from high-risk commodities. De Bourbon de Parme pointed out that only 40% of companies exposed to deforestation risk have set a target, and none has achieved 100% deforestation-free supply chains – with animal protein companies the worst-performing of all.

It is a terrible irony that those who grow our food cannot afford to feed their own families healthy, nutritious diets

Meanwhile, only 6% of companies that claim to be practicing regenerative agriculture provided evidence of concrete action. More alarmingly, only three companies in the agricultural inputs and food and beverage processor segments demonstrated leadership in reducing water use, even in water-stressed areas.

Besides widespread failure to address their environmental impacts, the benchmark also found a “shocking lack of action” on addressing human rights, with 309 of the companies assessed failing to do enough to prevent forced labour across their business activities and supply chains, and over half failing to stamp out child labour.

And although agricultural workers and their dependents account for two-thirds of the global population living in extreme poverty, only two companies, Unilever and Musim Mas, have fully committed to paying a living wage.

WBA’s findings were echoed in another report published last week, Fixing the Business of Food, by the Barilla Center for Food & Nutrition, which analysed the sustainability strategies disclosed by the world’s 100 largest food companies. 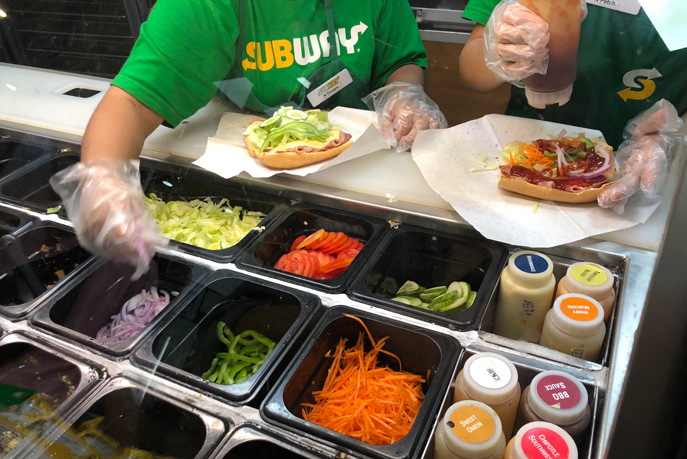 It found that although more than 90% of companies monitor their greenhouse gas emissions, only around a fifth have a specific objective to bring them down.  Only 5% published targets for sustainable supply-chain management , while none disclosed information regarding the protection of land and water rights.

Another report published ahead of the UN Food Systems Summit, by the International Fund for Agricultural Development (IFAD), finds that the global food system has become less efficient at delivering nutritious food sustainably over the last few decades.

IFAD said the growing concentration of power within food systems have seen profits for large food companies escalate, while the people working to produce, process and distribute food are trapped in poverty and hunger.

“It is a terrible irony that those who grow our food cannot afford to feed their own families healthy, nutritious diets,” Gilbert F Houngbo, president of IFAD, said. Houngbo reiterated this message on a panel during the Reuters Impact conference this month, adding that "whether farmers are farming one hectare or five hectares, the point is they have to make a decent living out of it. That is our challenge." WRI's Wanjira Mathai, speaking on the same panel, said: "Whatever we do, we must ctalyse inclusive transformation for Africa's people and landscapes", which are the most degraded in the world.

This new Food and Agriculture Benchmark clearly shows the need for increased commitment, transparency, and above all, measurable change

She added that multinational food companies need to commit to shortening their supply chains and sourcing locally.

But she said the greatest transformation in Africa's food system could come from the African Continental Free Trade Pact, which aims to create a single market for goods and services, spanning 1.3 billion people in 54 African countries.

"This opens up an opportunity for Africa to trade with itself, shortening supply chains and creating demand for the nutritious food we produce in these countries .... There's a huge opportunity if we get it right."

In an emailed statement, the Consumer Goods Forum, which represents the largest companies in the food system, defended the role of food companies in enhancing health and raising living standards globally. But its managing director, Wai-Chan Chan, acknowledged that "this new Food and Agriculture Benchmark clearly shows the need for increased commitment, transparency, and above all, measureable change."

Chan pointed out that CGF’s Forest Positive Coalition of Action, which brings together 20 businesses to publicly report their progress on addressing deforestation, last month published its first-ever annual report.

“This transparent approach will help ensure that companies can be clear on when, where and how deforestation risks occur, so they can take swift action.”

(This article was updated on 07/10/2021 to add coverage of Reuters Impact conference.)

Can business bridge the yawning gap in finance for natu...
‘Get the blend right’ and we can unlock trillions i...
Society Watch: Indigenous peoples fear being overshadow...
Brands failed to meet promises to protect forests. We c...
comments powered by Disqus