Catherine Early reports on how the zero-carbon source of heat and electricity, which has been under-exploited because of expense, is poised for expansion

Humans have taken advantage of underground energy over many centuries, with hot springs a big part of many cultures. In more modern times, geothermal energy has mainly been exploited in tectonically active regions such as the US west coast, Iceland and New Zealand, due to the need for temperatures of at least 150C.

On paper, it is the perfect renewable source, providing constant, predictable baseload power. However, development of geothermal for both electricity and heat has yet to reach its full potential.

Globally, 15GW of geothermal electricity capacity is installed. “There is potential to be much larger, we could achieve 100GW globally,” says Philippe Dumas, secretary general of the European Geothermal Energy Council (EGEC).

The heating and cooling sector is often underestimated in the energy transition, but it represent 45-50% of power demand in Europe

The exploration stage of geothermal energy is very expensive, with potential returns spread over many decades, he says. The risk profile is also high, since test drilling could find that the well temperature is not hot enough, or the flow rate is too low, he explains.

Globally, installed capacity of geothermal electricity generation is small, at 13.9GW compared with that of onshore and offshore wind and solar, which reached 651GW and 629GW respectively last year, according to data from independent policy network REN21, published in June.

However, industry experts agree that a combination of new technology and policies targeting carbon emission reductions, particularly in the heating sector, is now driving greater development of geothermal plants. The International Energy Agency is predicting the market to grow 22% in 2020-21, down from 28% pre-Covid-19. 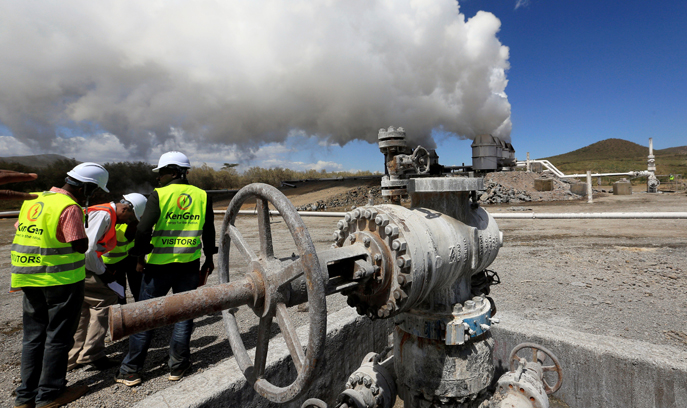 Expansion is particularly seen in Europe, where the European Geothermal Energy Council (EGEC) predicts that the existing 130 geothermal electricity plants will double in the next five to eight years, taking total installed European capacity to 3.3GW.

“The heating and cooling sector is often underestimated in the energy transition, but it represents 45-50% of power demand in Europe. Most of that is still powered by fossil fuels. In that context, geothermal is an incredibly important source of energy,” he says.

Alexander Richter, president of the International Geothermal Association (IGA), points to Kenya as another growth market.

Increasingly, geothermal heat is being used for processes in the agricultural sector or for industry, as well as homes

Geothermal heat is being used for processes in the agricultural sector or for industry, as well as homes

“It suffers a lot of drought, so they’ve had blackouts when the water level at hydropower plants has fallen. They started to invest in geothermal in the late 1980s, and now it produces around 50% of its electricity,” he says.

Kenya is about to benefit from another promising development, which could increase developers’ chances of obtaining private equity investment. This is crucial for the development drilling phase of exploration, which can be unattractive to debt and equity providers due to the risk of finding poor resources.

In May, insurance company Parhelion Underwriting was awarded a grant as the Danish government scaled up its GeoFutures GreenInvest vehicle, which uses insurance underwriting capital to assume risk that investors are unwilling or unable to take. 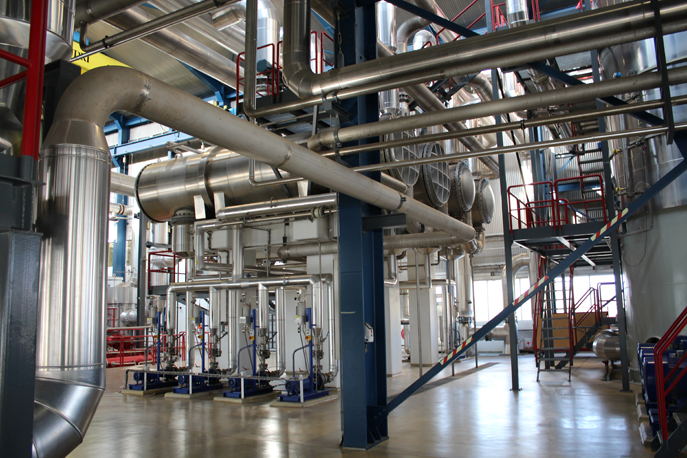 Julian Richardson, CEO of Parhelion, said: “Low-probability, high-impact risk is what the insurance industry does all day. By matching the risk profile to the risk capital out there, we can change the investment profile and move the projects along through to the development phase.”

Another promising development is enhanced geothermal systems (EGS), a technology where water is injected at high pressure to create cracks in rocks where the rock is not sufficiently permeable, or flow rates are low. EGS is currently only at research stage, but is being developed in the US, France, Australia, Japan and Germany, according to Tryfon Papalexandrou, renewable energy consultant at Mott MacDonald.

Meanwhile, geothermal power for district heating or cooling networks has a lower temperature requirement of 30-70C, making it viable in a wider variety of countries than electricity generation. Increasingly, geothermal heat is being used for processes in the agricultural sector or for industry, as well as homes. The Netherlands is increasingly using geothermal to heat greenhouses, with 100MW capacity added last year.

In 2019, there was 5.5GW of geothermal heat and cooling installed capacity in 25 European countries

Europe is seeing a surge in utilities and municipalities considering geothermal heating, particularly in Munich, Helsinki and Malmo, Richter says. Munich’s utility SWM is working to transform its current district heating system, which uses waste heat from electricity generation, to run on geothermal energy. This will enable SWM to generate heat without producing carbon emissions.

In 2019, there was 5.5GW of geothermal heat and cooling installed capacity in 25 European countries, with many new planned projects, compared with 2018, according to EGEC’s data. It predicts “a rapid acceleration and diversification in leading markets”, reflecting the wide potential for geothermal heat in Europe, where around 25% of the EU population is located near viable resources.

The UK is an example of a new geothermal market enabled by EGS. Geothermal Engineering has drilled a vertical well 5.1km under the ground in the south western county of Cornwall. It has temperatures of approximately 195C, and is predicted to supply 3MW electricity, enough to power 3,000 homes, and heat for 12,000. 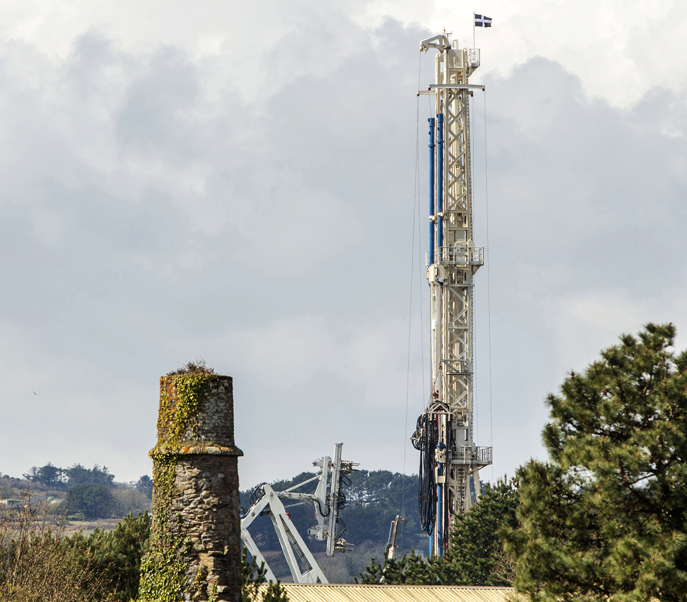 In the UK, Geothermal Engineering's deep geothermal well in Cornwall could begin operations next year.

The developer is hoping to test the flow rate of the water in the well in July, after which it will build the plant, which could begin operations 12 months later. Global engineering consultancy Arup has signed a contract to buy renewable energy certificates equating to 9,000MWh/year from the project, enough to supply zero-carbon electricity to all its offices in England, Scotland and Wales.

According to Dr Ryan Law, managing director of Geothermal Engineering, the potential for geothermal heating has traditionally been overlooked, especially in the UK. But he points to a new trend that could be a game-changer for the project, and others globally – the ability to extract lithium from geothermal brine, he says.

Geothermal brine contains minerals that vary from region to region, from silica in Iceland to zinc in the US. Cornish geothermal brine has a high lithium content, which could help feed the huge demand for lithium for batteries for electric vehicles and digital gadgets.

EGEC believes the extraction of the mineral will be an important driver in the future in regions where there is a significant amount of lithium in the brine, such as the Upper Rhine Graben in Germany, which has the biggest resource in Europe.

The extraction technology is in the innovation and demonstration phase, so little data exists on the potential cost reductions it could bring to geothermal projects, or complementary revenue it could generate, which will depend on the market price of lithium, according to the trade body.

There should be more clarity on commercial potential next year. Both Vulcan Energy Resources, which is developing the project in Germany’s Rhine Valley, and ES Geothermie, which is behind two projects near Strasbourg in France, are to carry out test drilling. The US, New Zealand, Chile, Kenya and the UK all have geothermal brine projects under development, according to EGEC. 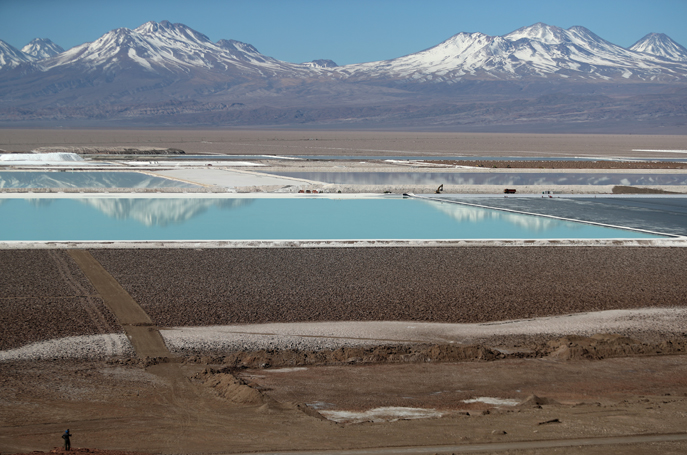 The trade body notes that extracting lithium from brine has a lower environmental footprint than typical lithium mining. It uses less than 50m³ of water per tonne produced, compared with 150m³ to 450m³ for typical lithium production, and produces no CO2, compared with 5-15 tonnes of CO2 from traditional extraction, depending on what method is used. This increases its attractiveness for car manufacturers looking to cut their emissions.

Law says: “The carbon footprint of lithium is pretty substantial and we need to find a way to bring that down and supply it more at a domestic level, instead of shipping it from open-cast mines in Latin America to build supposedly ecological cars.”

Extracting lithium from brine will not be able to compete with the biggest lithium mines in terms of quantities, says Andrew Day, programme director at consultancy Mott MacDonald. Still, geothermal developers are keen to investigate its potential as it would provide a potential extra revenue stream for plants. “We are certainly going to start looking at this in Cornwall, I think it will play quite a part in the future of these geothermal projects,” Law says.

“For us as developers, it’s really starting to change the picture – adding a third revenue stream makes us much more attractive,” he says. “Geothermal is baseload electricity, but also supplies heat and minerals – that really gives us the edge it needs to attract more substantial levels of funding.”

Catherine Early is a freelance journalist specialising in the environment and sustainability. She writes for Business Green, China Dialogue and the ENDS Report among others. She was a finalist in the Guardian’s International Development Journalism competition.

This article is part of our in-depth Energy Transition briefing. See also:

Why V2G holds the key to the electric vehicle revolution