Investments are flowing into US port infrastructure ahead of an offshore wind construction boom but long-term competitiveness will require wider coastal networks, leading industry figures said. 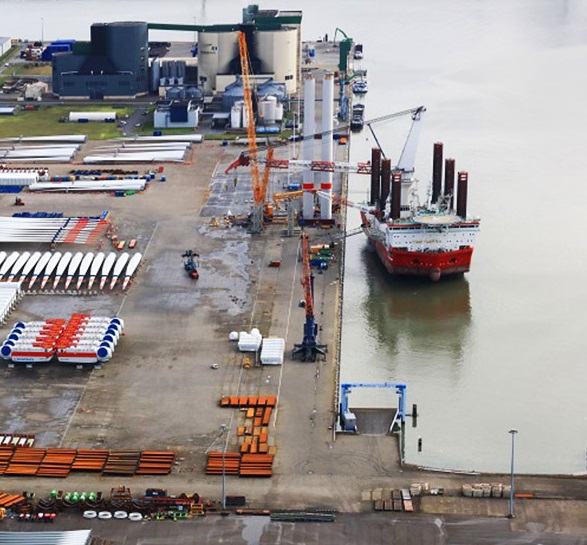 On May 11, the Biden administration approved Vineyard Wind, the US' first large scale offshore wind farm, underpinning a new industry that will create thousands of jobs.

President Biden aims to install 30 GW of US offshore wind capacity by 2030, an ambitious target that requires a rapid build out of East Coast port infrastructure. The White House plans to complete environmental reviews of 16 offshore wind projects by 2025, setting up a boom in manufacturing, assembly and installation in the coming years. Only a limited number of East Coast ports currently offer the port space, deep draft and bridge height clearance needed to assemble and tow the giant turbines used on offshore wind projects. The Biden administration will provide $230 million in grants to states and port authorities to upgrade port infrastructure, it said, on top of funding commitments already made by states and offshore wind developers.

Atlantic Shores plans to use a new offshore wind port planned in New Jersey to build 2.3 GW of offshore capacity. The New Jersey Wind Port will include a 30-acre marshalling area for component assembly and staging, additional laydown area, a dedicated heavy-lift wharf and access to the Atlantic Ocean free of vertical restrictions. New Jersey is currently seeking construction approval and aims to complete the port by the end of 2023.

“Appropriate marshalling and manufacturing ports will greatly improve efficiency and increase the amount of local content and labour that can be incorporated," Copeland said.

The 800 MW Vineyard Wind project in Massachusetts is jointly owned by Avangrid and Copenhagen Infrastructure Partners (CIP). Onshore manufacturing is due to start this year and the project is expected to be installed by 2024.

Last year, Vineyard Wind and Mayflower Wind, a joint project by Shell and EDPR, signed lease agreements to use construction and assembly infrastructure at the New Bedford Marine Commerce Terminal in Massachusetts from 2023 until 2027.

As the first large US project, most of the components for Vineyard Wind will be manufactured in Europe. The buildout of East Coast ports and industry will bring more of this business to the US. New York state is investing $200 million in offshore wind port infrastructure to meet its target of 2.4 GW offshore wind by 2030 and 9 GW by 2035. The state has signed contracts with the 816 MW Empire Wind 1 project led by Equinor and the 880 MW Sunrise wind farm being developed by Orsted, and has provisionally approved Equinor's 1.3 GW Empire Wind 2 and 1.2 GW Beacon Wind projects.

Equinor will invest over $60 million in port upgrades in New York and commit $5 million to workforce development and community benefit schemes. Equinor is developing all three of its projects in New York with oil group BP.

Equinor's priority is new infrastructure at the South Brooklyn Marine Terminal (SBMT) and the Port of Albany, both in New York State, the company told Reuters Events.

At SBMT, Equinor plans to assemble all of its East Coast offshore wind farms, build an onshore substation, and establish an operations and maintenance (O&M) base.

“Additional work will be done to ensure the port can support the manufacturing of the staging and assembling facility," the company said.

At the Port of Albany, Equinor plans to establish the US' first offshore wind tower manufacturing facility. The plant would be developed with tower manufacturer Marmen and steel product supplier Welcon and would create 350 direct jobs, Equinor said.

The Empire Wind 2 and Beacon Wind projects alone will "leverage $3 of private funds for every $1 of public funds to unlock additional investments of $644 million for resilient port facilities,” the New York State Energy Research and Development Authority (NYSERDA) said.

The state of Virginia is to invest $40 million from its 2021 budget to upgrade the Portsmouth Marine Terminal (PMT) for offshore wind activities. Utility Dominion Energy plans to use the PMT or nearby Newport News Marine Terminal for its 2.4 GW Coastal Virginia Offshore Wind project. Dominion hopes to complete the environmental approval process for the wind farm in 2023, start construction soon after, and recently placed the first order for a US-made wind turbine installation vessel (WTIV).

The PMT has 3,540 feet of wharf, several berths and heavy-lift capacity. The port already offers deep water access, no overhead restrictions and sufficient space for large components. Dominion is working with the port to identify required upgrades and potential funding sources, the company told Reuters Events.

“The Port of Virginia offers a lot of advantages and we believe it will serve our project and other projects in the region well,” it said.

“Regional cooperation on port development and utilization, along with limitations on mandates to use specific ports will provide for more efficient project execution and cost to customers,” Dayney said.

States will be keen to host manufacturing jobs but Dayney said a more regional approach to local content will be required to establish the volume and skill needed to drive down costs.

“Building a factory in every state is neither sustainable in the short term, nor the long term,” he said.