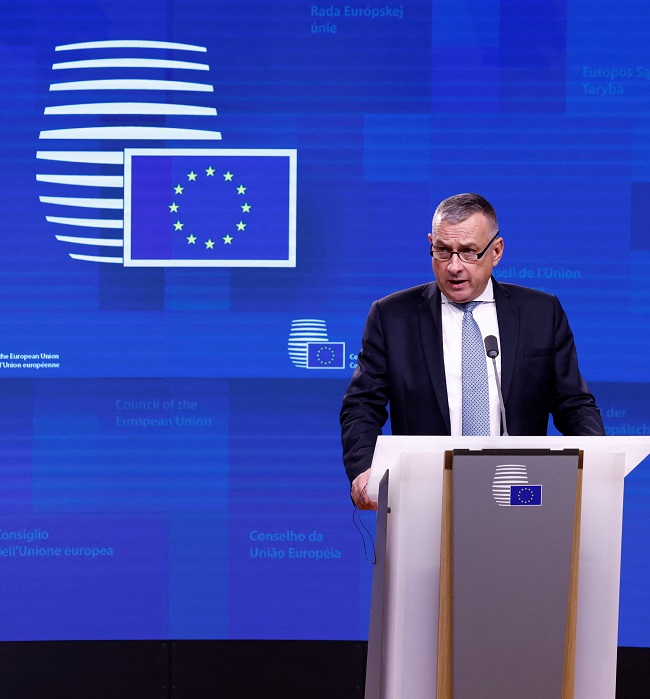 EU members have agreed to curb excess power profits but are yet to agree limits on gas prices. (Image: REUTERS/Yves Herman)

EU energy ministers agreed on September 30 to limit revenues from wind, solar and nuclear power generation to 180 euros/MWh ($180/MWh) from December until the end of June.

The revenue cap is expected to raise around 117 billion euros and would be collected by national authorities and spent on measures that reduce consumer bills this winter. The EU is looking to curb the impact of soaring gas prices on electricity markets following Russia’s invasion of Ukraine.

The move caps revenues at less than half the current market prices but far above the running costs of most wind and solar assets. The benchmark German annual power contract soared to over 1,000 euros/MWh ($1169/MWh) for the first time in August and was 435 euros/MWh on October 4.

The impact on wind and solar operators will depend on their contract structures and operators in Germany and owners of older assets could be the most affected.

The EU price cap should not impact the business case for new wind and solar, industry officials say, but they are concerned over the potential for national limits.

The EU should also put in place a temporary price cap on natural gas until a new pricing index can be introduced, European Commission President Ursula von der Leyen told the European Parliament on October 10. Germany, Austria, the Netherlands, Hungary and Denmark have opposed an EU-wide cap on gas prices, fearing it could scare suppliers and reduce supply options.

The measures will run until the spring of 2024 and will include an emergency brake on gas prices and a temporary brake on electricity prices for households and small and medium-sized businesses.

Tax on gas sales will fall to 7% from 19% and the government is scrapping a planned gas levy that aimed to help companies mitigate high spot gas prices.

EU states are looking to curb the impact of soaring gas prices on energy bills following Russia’s invasion of Ukraine. EU ministers have agreed to limit power generation revenues but have yet to agree an EU-wide cap on gas prices.

Germany's large industrial base makes it particularly sensitive to high gas and electricity prices. The government will provide more details of its brake on gas prices later this month.

"Prices have to come down, so the government will do everything it can," Scholz said. "To this end, we are setting up a large defensive shield."

New legislation that would accelerate permitting of power transmission for solar and wind projects was pulled from a government funding bill agreed by the U.S. Senate on September 27.

Senator Joe Manchin released the permitting bill on September 21 but pulled it from the funding bill needed to avoid a government shutdown following strong opposition from Republicans and Democrats. The Republicans want more support for fossil fuels while progressive Democrats want better protection of environmental laws.

Permitting delays and grid connection costs are holding back solar and wind growth. The bill would require President Biden to designate 25 energy projects of strategic national importance for speedy federal review and sets a two-year target for environmental reviews that need to be completed by more than one federal agency. The bill also requires the Federal Energy Regulatory Commission (FERC) to ensure project costs are allocated to customers that benefit. It also requires the federal government to issue permits for Equitrans Midstream Corp's long-delayed $6.6 billion Mountain Valley gas pipeline between West Virginia and Virginia.

The bill followed a compromise between Manchin and Senate Majority Leader Chuck Schumer to secure the West Virginian's support for the Inflation Reduction Act (IRA).

The IRA includes $369 billion of spending measures for climate and energy security and was signed into law last month. The act extends tax credits for solar and wind for the next ten years and allows stand-alone storage projects to qualify for the first time. The measures could hike annual utility-scale solar installations to 49 GW by 2025, five times higher than in 2020, and growth rates would continue to increase thereafter, Princeton University said in a special report.

"The U.S. electric grid is simply not equipped to handle the significant volume of clean energy that is going to be deployed in the next decade after passage of the Inflation Reduction Act," the U.S. Solar Energy Industry Association said. "The [bill] proposal from Senator Manchin takes important steps to reform processes that will be critical to the growth of clean energy."

The purchase will be partly funded by RWE issuing a $2.43 billion convertible bond to a Qatar Investment Authority unit which will become a 9.1% shareholder in RWE.

The transaction will nearly double RWE's U.S. renewables portfolio to more than 7 gigawatts (GW) and grow its regional project pipeline by 7 GW to more than 24 GW. After the takeover, solar will account for 40% of RWE's U.S. portfolio, up from 3% now, presentation slides showed.

Last year, RWE outlined plans for 50 billion euros ($49.5 billion) of gross investments by 2030, including 15 billion euros in U.S. The group may upgrade spending targets for Europe when it updates markets on its spending plan at the end of 2023, RWE CEO Markus Krebber told journalists on October 2.

"There was a strategic objective to especially make a step forward in the U.S., which we now clearly achieved with this transaction. But that does not mean that we're going to scale back on our European and UK ambitions," Krebber said.

Factors which would impact spending in Europe include the type of renewable energy financing mechanisms available and any measures to accelerate planning and permitting, he said.