Landfill solar activity is rising on state incentives and land cost savings and improvements in racking could boost competitiveness. 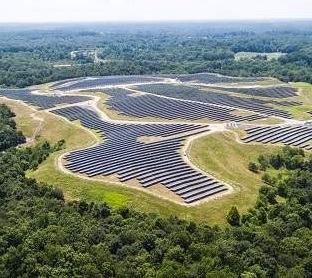 As the US looks to accelerate renewables build, landfill solar could help overcome land availability challenges.

Some 500 MW of solar capacity was installed on U.S. landfills by the start of 2020 and there is potential for 63 GW on existing sites and sites due to close by 2030, RMI, a renewable energy NGO, said in a report published in October.

Activity thus far has been concentrated in New England and the Mid-Atlantic, where states have offered tariff incentives. Some states, along with the Environmental Protection Agency (EPA), also offer grants to cleanup landfill zones and other brownfield sites.

The biggest installed project is the 16.8 MW Annapolis plant in Maryland but larger projects are now being built in fast-growing markets like Texas.

Texas offers the greatest potential and could host 27 GW of capacity at over 2,000 sites, most of which are closed, RMI said in its report.

"Texas could develop a nation-leading landfill solar program in its deregulated market," it said.

Landfill solar is most attractive near large cities where there is high demand for power and land. Some states including Oregon and Connecticut have even restricted solar build on farmland, shrinking the options for developers.

"Texas, like many states, should develop clear practices for any local or state approvals and permitting," Matthew Popkin, Manager – Urban Transformation at RMI, told Reuters Events.

“Most of the review questions typically raised by a planning board disappear when it is recognized that a landfill has no preferred usage," he said.

The $36 million Annapolis plant in Maryland was developed by Building Energy and built by EDF Renewables in 2018. The city of Annapolis, Anne Arundel County and the County Board of Education are the offtakers under 20-year power purchase agreements (PPAs) and Baltimore Gas & Electric provided the grid connection. The project was approved by the Maryland Department of the Environment.

"Multi-jurisdictional collaboration" was key to the project’s success, along with favourable site conditions and net metering support, Popkin said.

Under a 20-year contract, the city of Annapolis earns $15,000/year per MW of capacity, except for the portion purchased by the city, plus $10,000/year for the lease of the land to the solar developer, according to a financial statement on the Maryland Department of Planning website.

"Overall the city estimates cost savings of $250,000 per year for the 20 years of the contract, plus 2% inflation per year," the statement says.

Massachusetts is an early leader in landfill solar due to favourable state-level incentive measures under its SMART program. A 2 MW landfill solar project in Massachusetts can receive as much as $210/MWh, including a $40/MWh incentive for landfill development, a higher rate than for most other brownfield projects.

Connecticut, New Jersey, Maine and New York have also done a lot to attract development, including offering incentives and “clear cross-departmental guidance on how to advance a landfill solar project," Popkin said.

While land costs may be lower, the topography of the landfill site and management of the protective land cover can increase construction and maintenance costs.

Sites may be unsuitable if the landfill areas are too unstable or steep to hold large solar panels. Construction vehicles must be able to access the site without compromising the landfill design.

Solar efficiency could be improved with technology adaptations. Landfill developers typically use ballasted solar arrays that do not penetrate the surface. These do not currently incorporate the sun-tracking systems that are widely used to boost output.

As demand grows, Curran predicts racking developers will also develop systems that can be used on steeper slopes.

Plant operators must also maintain the grass surface of the landfill, which adds to the cost.

As for all solar projects, proximity to grid connection is also a critical factor. Some landfill sites may be miles away from transmission networks and grid expansions increase costs and development times.

Power grid investments planned by the Biden administration could open up new opportunities for landfill development, helping the US meet its ambitious decarbonisation goals.