Bangladesh Briefing Part 1: Overview - Resilience on the road to responsibility

One of the poorer countries among emerging economies, Bangladesh has an amazing secret weapon in its strivings towards sustainability: a youthful and industrious population

Resilience is defined by the Oxford English Dictionary as “the capacity to recover quickly from difficulties; toughness”. In Bangladesh, a low-lying country of about 162 million inhabitants, all but an island within India and subject to recurring severe floods and cyclones, resilience is a necessary national trait.

Bangladesh is a young nation, having achieved independence from Pakistan in 1971, and having since been struggling to build a solid democracy. The current, popularly-elected ruling party and its female leader, Sheikh Hasina, are seemingly locked in bitter rivalry with the main opposition party.

In fact, in spring 2012 one of the senior members of opposition party BNP, Ilias Ali, disappeared, and his uncertain fate triggered strikes and disturbances, which have continued.

Bangladesh’s chaotic political scene contributes to the country’s peripheral standing on the world economic stage. More than 40% of the Bangladeshi population can be classified as extremely poor. Infrastructure weaknesses are so pronounced that businesses are developing their own power sources in order to keep the lights on and equipment running.

The country falls in the bottom third for corruption as ranked by Transparency International. To add to its woes, Bangladesh is widely perceived to be one of the countries receiving some of the most brutal consequences of changing climate – more floods, more storms, more catastrophe.

Amid these challenges, it is no wonder that corporate responsibility and sustainability have not been high on the priority list. Instead, development and simple philanthropy have until recently trumped a fuller understanding by businesses of the benefits and necessities of the wider responsibility agenda.

The first is Bangladesh’s NGO movement. The Bangladesh Rural Advancement Committee (BRAC) is the world’s largest NGO. Bangladesh is also the birthplace of Nobel laureate Muhammad Yunus and the seedbed of both micro-credit and the enormously successful and world famous Grameen Bank, pioneered by Yunus. These behemoths foster sustainable development simply through their social business quest to alleviate poverty.

In fact, many of Bangladesh’s economic indicators are positive: for example, economic growth has been steadily in the range of 3-4% annually. Abdul Bayes, a professor of economics at Jahangirnagar University, estimates that growth could be closer to 8% if Bangladesh could find ways to leverage its labour assets more effectively and get a windfall of foreign direct investment by controlling corruption and ineffective government decision-making.

Meanwhile, Bangladesh has made great strides in reaching many UN Millennium Development Goals (MDGs). In the past two decades Bangladesh’s poverty rate has reduced significantly (31.5% in 2010 compared with 56% in 1992); gender parity in primary education has basically been achieved; and maternal and infant mortality has been reduced.

Bangladesh’s industrial landscape is dominated by the ready-made garment trade, which accounts for more than three-quarters of the country’s export income. Emerging from the tatters of the native jute industry, which died as plastic rose in importance, the garment industry has shown continual resilience.

In fact, over the past two decades, a constantly growing number of European and US clothing companies have shifted to Bangladesh for sourcing their clothes, as wages have risen in China, Thailand and elsewhere.

The double-edged sword, of course, is that the very features that make Bangladesh attractive – a huge pool of low-wage and low-skilled workers, ineffective and insufficient legal protections for these mostly female workers, and a government with a poor record on corruption and governance – also make the country in dire need of improved corporate responsibility.

The rub is that the giant multinational brands (the likes of H&M, Primark, Levi Strauss and many others) own very few of the thousands of small and medium-sized factories that actually produce the fast fashions.

But, as Parnini says: “Most business concerns don’t rate corporate responsibility highly unless being pressured by their foreign buyers.”

Dr M Alimullah Miyan, founder of the International University of Business, Agriculture, and Technology, is a close follower of corporate responsibility in Bangladesh and sees a huge change happening at a relatively swift pace. He says it is Bangladesh’s motivated, and millions-strong, young population that, properly stimulated, can serve as growth’s workhorse and cause this country to earn its place on that trumpeted “Next-11” list of up-and-coming economies. 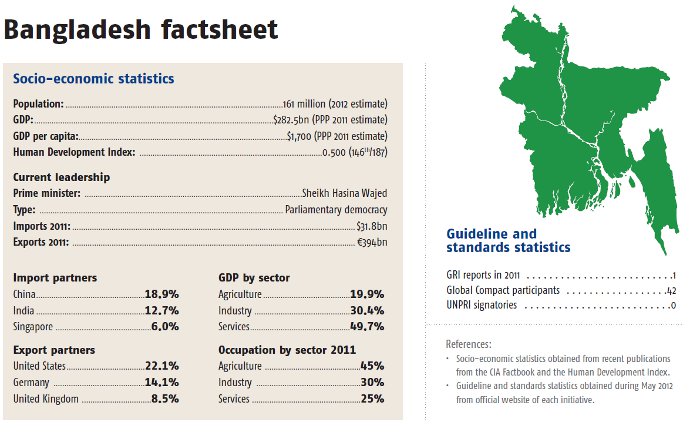