‘Plastics campaign by retailers is paying dividends in consumer trust’

The Institute of Business Ethics (IBE) monitors the media for business ethics-related news throughout the year. The resulting briefing, entitled Ethical Concerns and Lapses 2018, gives an overview of which sectors and issues related to business ethics were most covered in the news. Last year, a total number of 464 different stories were recorded involving lapses of companies with a UK presence.

Three sectors account for nearly a third of these media mentions. As in previous years, the highest number of ethical lapses was recorded in the banking and finance sector. In 2018, however, this sector was closely followed by the IT sector and professional services, which have previously been lower down the list.

Organisations mentioned in the headlines were frequently criticised and condemned for unethical conduct. While this is the nature of news reporting, it should be noted that there have been some positive changes in the way that organisations operate in relation to how they do their business.

The retail sector has an increasing number of positive mentions in 2018, particularly relating to commitments to reduce food waste and single-use plastics

Reported unethical incidences in the general retail sector, for example, have fallen sharply compared with 2017, relative to other sectors. While this sector featured second last year, it has now fallen to eighth on the list. The general retail sector has also received an increasing number of positive mentions in 2018, particularly relating to environmental commitments to reduce food waste and single-use plastics.

Among these initiatives was the commitment by large UK supermarkets to drive down food waste by committing to halving waste from “farm to fork”. This voluntary scheme aims to ensure that the UK meets the United Nations Sustainable Development Goals target of halving per capita global food waste at retail and consumer level as well as through production and supply chains by 2030.

The UN estimates that the equivalent of 250 million meals a year are edible and available, but for some reason or another get thrown away. At the same time, one in nine people in the world remains malnourished.

Regarding reducing plastic waste, every major UK supermarket has agreed to ban unnecessary single-use plastic packaging by 2025. Experts believe that UK supermarkets create around 800,000 tonnes of plastic every year, which causes damage to our ecosystems when it gets into the environment, either through improper disposal or by degrading into microplastic.

This growing worry about the dire state of the planet is also echoed in the IBE’s Attitudes of the British Public to Business Ethics 2018 survey. This publication reveals that, after falling since 2008, environmental responsibility has significantly regained focus as an issue of concern, now equalling the level of the public’s concern over executive pay.

Other consequences of pollution may partly explain this trend of a so-called “Blue Planet effect” – the impact that the nature documentary series Blue Planet II has had on raising awareness among viewers of the major impact that plastic is having on our oceans.

Consumer attitudes are shifting from a throwaway society to one that is more focused on sustainability, the longevity of products and preserving the planet

In other European countries, greater awareness of environmental challenges has increasingly led voters, particularly millennials, to turn to green parties. Offering clear positions on issues such as climate change, biodiversity and sustainability, green parties in several countries are now polling higher nationally than the traditional centre-left and are increasingly capturing the attention of disillusioned centre-right voters.

This awareness has resulted in consumer attitudes shifting from a throwaway society to one that is more focused on sustainability, the longevity of products and preserving the planet for future generations. The retail sector is trying to address these growing concerns among consumers, and consumers feel like they have agency when it comes to business behaviour.

Consumers are increasingly choosing what to buy and use based on the values of organisations. Any organisation that incorporates sustainable and environmentally friendly practices into its business model is, therefore, more likely to succeed in attracting the attention and business of consumers now and in the future. 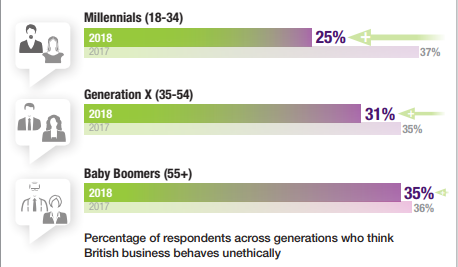 The importance of corporate values is reflected in this year’s Edelman Trust Barometer. The level of trust in the relationship between employers and employees across the globe greatly outweighs the relationships between the general public and institutions like governments or NGOs. Its polling found that 67% of respondents would refuse to work for, or expect higher pay from, an organisation that did not share their values or provide the opportunity to address societal problems.

The wide reporting of ethical lapses in 2018 has reinforced the importance for organisations to consider how they do their business. Because of news headlines focusing on the importance of preserving the environment and the work businesses are doing to reduce their environmental impact, purchasing habits have been widely influenced. As a result, there is a growing belief that businesses should be a force for good and have a positive social impact.

Organisations that are able to keep up with the increasingly environmentally conscious concerns of their consumers, and are able to act quickly to minimise the repercussions if a scandal hits the press, are more likely, in the long run, to be viewed in a favourable light by the wider public.

Linn Byberg is researcher for the Institute of Business Ethics, a registered charity funded by corporate and individual supporters. For over 30 years, the IBE has advised organisations on how to strengthen their ethical culture by sharing knowledge and good practice, resulting in relationships with employees and stakeholders that are based on trust. www.ibe.org.uk @ibeuk

‘Get the blend right’ and we can unlock trillions i...
Hotels sector strives to make up lost time on sustainab...
The woman at the eye of the storm of Asia’s rising cl...
'Young people must be at the table if we are going...
comments powered by Disqus