While garment workers’ minimum wages are rising in many Asian economies, in Cambodia, unusually, it is western brands that are responding to public pressure, not the government

Several Asian countries are raising minimum wages in what appears to be a response to pressure from civic and worker organisations. Taiwan’s Ministry of Labour, after long-term pressure from civic groups, has announced that it will raise the minimum wage by “about 4%” in 2015. This means the monthly wage will rise to about $668 and that the minimum hourly wage will be about $4.

The rise is more than double Taiwan’s expected inflation rate this year. On the Chinese mainland, minimum wages vary from province to province and city to city but are generally on the increase – major production centres such as Hangzhou and Wenzhou have raised their minimum wages by about 12%. Vietnam, Thailand and Indonesia are also raising their minimum wage rates.

The clearest victory for worker protests is the news that Cambodian textile workers have persuaded major international fashion brands to agree to a minimum wage of nearly double the current rate to $177 a month.

Cambodia has been the country where militant action has been most pronounced recently and where changes are being forced by worker activism and an aversion to bad publicity by brands. Thousands of textile workers, mainly women, have taken to the streets of Phnom Penh over the past year or so calling for higher wages as increasing numbers of western fashion brands move production to the country, looking to partially escape fast rising wages and costs in China. 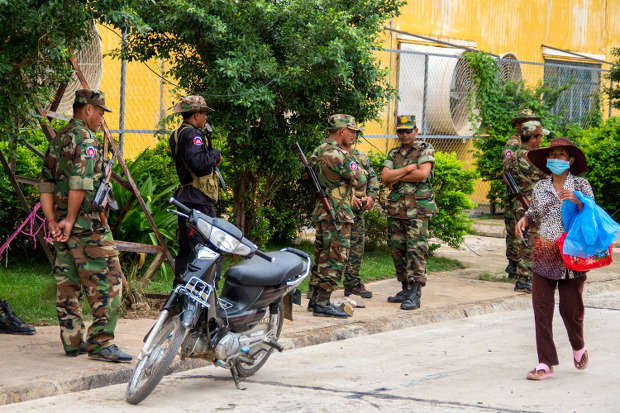 Workers in orange T-shirts have been protesting in their lunch hours and the government became so concerned it called out the army several times. However, now the brands themselves have reached a settlement with the workers – Next, New Look, C&A, H&M, Inditex (owner of Zara, Massimo Dutti and other brands) and Primark have all joined the settlement and informed the Cambodian government and the local Garment Manufacturers Association.

Cambodia has become a crucial centre in the minimum wage debate across Asia because of the government’s intransigent stance and the fact that, although it is one of the top 20 clothing producers in the world, Cambodia has among the lowest minimum monthly wages in the industry, according to the International Labour Organisation (ILO).

The Coalition of Cambodian Apparel Workers Democratic Union (CCAWDU) is pushing ahead with more activism, despite rallies of worker – invariably peaceful and led by women textile workers – attracting soldiers armed with loaded rifles. The CCAWDU claims rallies have been held at more than 200 factories across the country.

There will be planned negotiations between the government, unions and factories in early October to set next year’s minimum wage for the industry as a whole. It is to be hoped that the government will opt to follow the lead of the brands in raising wages and not to respond with troops again. A crackdown on striking garment workers in January this year left at least four people dead with many activists and union leaders still in detention or placed under court supervision banning them from joining any further meetings and/or public gatherings.

Since enacting economic reforms and moving away from a planned economy in the 1990s, Cambodia has been intent on integrating itself into both the regional Asean and World Trade Organisation trading systems. The textiles sector, which employs close to 700,000 workers and earns the country about $5.5bn in garments exports last year, has been keen to support this push.

The actions by the major brands show they are concerned about the ethical situation in Cambodia and will bear this in mind when deciding where to place orders, where to source their goods from, and where to employ their people in future. Forcing confrontation and sending in troops against seamstresses does not seem a great way to raise Cambodia’s attractiveness as a sourcing location or a centre for ethical textiles production.

How we can build up digital herd immunity without losin...
Press Release: President & CEO, Oxfam, joins Respon...
The disruptors: How Catherine Howarth is helping to mak...
‘Philanthropy won't be enough to address the ‘...
comments powered by Disqus

Leaving no one behind in the clean energy revolution

No longer the plucky underdog, the growing renewables industry risks losing its license to operate unless it generates co-benefits. Mark Hillsdon reports on how RE100 members Google, Iron Mountain, Clif Bar, Chanel and Novo Nordisk are amplifying their impact

Thanks to everyone that joined us today at #TRANSFORM, see you back tomorrow morning at 9am BST for our 2nd day to… https://t.co/FFH22R2UHg

And finally for day 1 at #TRANSFORM for an #exclusive fireside chat with @Shelley McKinley, VP of Technology and Co… https://t.co/CWAHKaEG1w