In his monthly roundup of sustainability news, Oliver Balch reports on the latest data on emissions, green investor activism, and a global call to save hard-hit SMEs

NO ONE IS breathing easy right now, metaphorically speaking. Yet, in the real world of ambient air quality and miniature particulates, the situation is looking up. According to a new Europe-wide study, air pollution (which normally kills around 4.2 million people every year, including 470,000 Europeans), is losing its sting. Compared with last year, the concentration of nitrogen dioxide and fine particles (known as PM2.5) in the air during the month of April fell 40% and 10%, respectively. According to the Centre for Research on Energy and Clean Air, which carried out the study, 11,000 deaths have been avoided as a result. The benefit of cleaner lungs and fewer respiratory problems also translates into an estimated 1.3m work days no longer being lost to sickness, a potential productivity boost that, regrettably, is somewhat reduced by the continued lockdown.

The cleaner air is a result in the dramatic drop in traffic and industrial activity caused by the Covid-19 pandemic. Petroleum consumption dropped by one-third in the US since the start of lockdown on 13 March, according to the US Information Administration, a pattern widely reflected elsewhere around the world. The latest figures from the International Energy Agency (IEA), for instance, indicate a 50% drop in global transport activity in the first quarter of 2020, compared with the annual average in 2019. And, while demand is expected to pick up when economic restrictions are lifted, the medium-term future for fossil-fuel industries looks grim. Research firm Rystad Energy predicts that oil demand will fall by 10.8% this year, with annual demand for road and jet fuels dropping by 11.2% and 33.6%, respectively. Little wonder that investor circles are buzzing with talk of stranded assets.

The current decline in energy use means energy-related carbon emissions are set to fall by 8% this year (to 2.6 gigatonnes) – the lowest level for a decade, according to the IEA. Preliminary modelling by the European Union suggests that its emissions could fall by 24.4% against its 2020 emissions target. In China, emissions plummeted to 200 million metric tonnes of CO2 (more than half of the UK’s annual carbon emissions), representing a 25% average decline in February, compared with before the outbreak.

Regrettably, it doesn’t look like Covid-19’s effect on emissions will stop global temperature rises in the immediate term. According to the US National Oceanic and Atmospheric Administration, there is still a 75% chance that 2020 will be the hottest year on record. And it is sobering to realise that similarly steep declines (7.6%) will be required every year for the next decade, according to the UN, if global temperature rises are to stay within the target cap of 1.5C above pre-industrial levels, as set by the Paris Agreement.

Optimists will take heart from the IEA’s observation of a Covid-19 bump for renewables. Zero-carbon power sources are the only segment of the power market to have posted positive growth for the first quarter of 2020 (up 1.5%). Figures from the International Renewable Energy Agency (IRENA) suggest that the increase is largely influenced by new projects, which collectively caused solar and wind power generation capacity increase to rise by 98 GW (up 20% year-on-year) and by 59 GW (up 10%), respectively. IRENA’s data indicates that Asia is dominating growth in solar power (accounting for around 60% of total new capacity), while China and the US are leading the way in wind power (26GW and 9GW, respectively).

The United Nations Development Agency (UNDP) reminds us that today’s climate gains come with brutal trade-offs, including a global death toll from Covid-19 of over 234,000 people, a high risk of “serious disruption” to 436 million businesses, and the prospect of negative per capita income growth for over 170 countries this year. At the same time, the UNDP cautions against emissions’ reductions being scuppered as countries scramble to re-start their economies. The UN body cites the economic rebound from the 2008/9 economic crisis, which saw carbon emissions not only catch up pre-pandemic levels but quickly exceed them. Hence, the growing call by a range of institutions – from the European Green Party, WWF and Greenpeace through to the Club of Rome, the World Bank and even a Europe-wide alliance of industrial giants – to integrate green measures into national recovery plans. 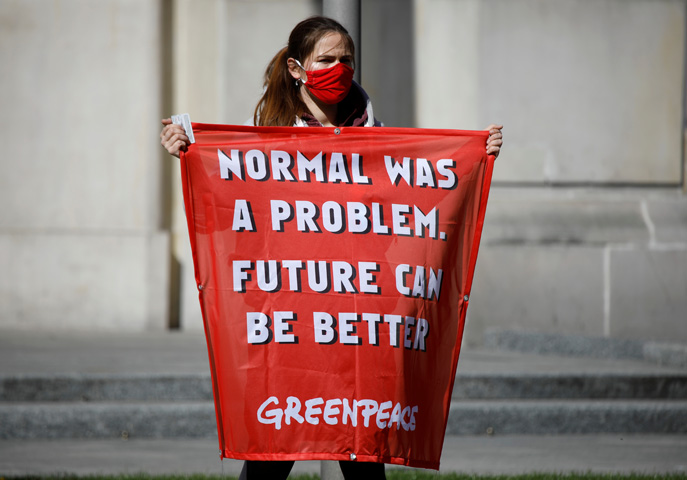 THE COVID-19 pandemic has turned most corporate annual general meetings (AGMs) into online affairs. Going virtual has reduced campaigner’s habitual publicity stunts, but it has done little to stymy their zeal. Moreover, corporations appear to be listening. Oil giant BP, for example, which is scheduled to hold its AGM at the end of this month, has agreed to work on a joint resolution about its 2050 climate goals with activist group Follow This.

The accord comes after the pressure group, which represents around 5,400 green-minded shareholders, tabled a resolution calling on BP to adhere to the Paris climate accord. However, Follow This has had less joy with state-owned Norwegian oil company Equinor, against which it has issued a similar resolution ahead of its AGM on May 14. Similarly, shareholders fell 8% short of the majority they needed to pass recent a resolution calling on Australian oil and gas company Santos to toughen its emissions reductions goals (which include a commitment to cut emissions by 5% by 2025). Meanwhile, Standard Bank has reportedly blocked Just Share's request to table a resolution calling for greater transparency on its oil and gas lending at its AGM next month.

However, two large UK institutional investors have committed to support a resolution calling on Barclays’ management to phase out funding for fossil fuels and utility companies. The decision by M&G Investments and EOS comes after the UK bank, which is set to hold its AGM on 7 May, unveiled its goal of becoming net-zero by 2050. Other investors have since followed suit, including Norway’s sovereign wealth fund. Despite a rise in such commitments within the European banking sector, ShareAction (the campaign group that brought the resolution against Barclays) says many such targets are “misaligned” with the Paris Agreement. In its new ranking of major European banks, only 10% of those surveyed have a group-wide climate strategy that aligns with a 1.5C scenario. The proportion increases to 25% in the case of a 2C temperature rise by 2050.

This scepticism is echoed by environment groups such as the Rainforest Action Network, BankTrack and the Sierra Club, which, along with others, recently published research indicating that global banks have invested around $2.7tn in fossil fuels since the 2016 Paris Agreement. The worst culprits are US banks. The research identifies JPMorgan Chase, Wells Fargo, Citi, and Bank of America as being responsible for a staggering 30% of all fossil fuel financing by the 35 global banks surveyed.

That said, there are signs of a gradual tightening in banks’ climate strategies. In response to questions at its recent AGM, London-headquartered HSBC confirmed it would no longer finance coal-fired power stations in Vietnam, Indonesia or Bangladesh. This closed a loophole left open when HSBC last revised its energy policy in 2018.

Several of the financial sector’s green(er) leaders, meanwhile, are using their AGMs to reassert their climate commitments, including Spanish bank Santander (the top-rated bank in the Dow Jones Sustainability Index), which last month assured shareholders that it would continue to mobilise funds to “support the fight against climate change”. 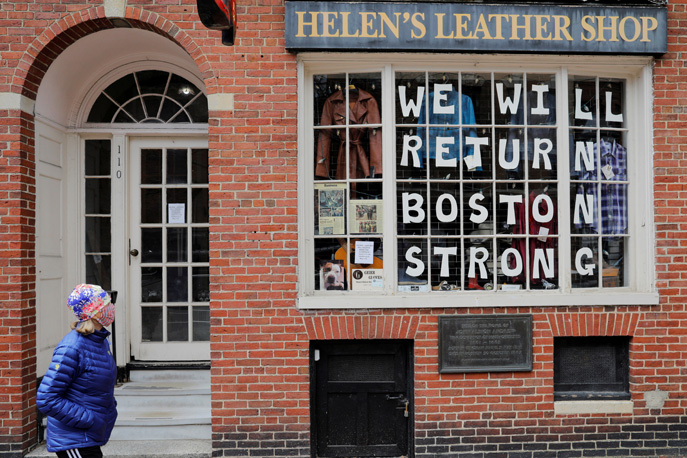 SMALL AND medium-sized enterprises (SMEs) account for over 95% of the world’s firms and provide the majority of global employment. Or at least they did, prior to Covid-19. Now, millions of these companies are feeling the sharp end of the “worst economic downturn since the Great Depression”, with those in developing countries particularly badly hit. In an effort to help them through, the International Chamber of Commerce (ICC) is requesting national governments to reduce compliance burdens, relax tax rules, and implement financial support mechanisms. The ICC’s “Save our SMEs’ campaign also includes a corporate action call in which, among other priorities, it is requesting bigger businesses to support the SMEs in their supply chains.

Invest in Africa, a private-sector led initiative set up to promote SME growth in Africa, has launched a Covid-19 SME Survival Toolkit. The free online resources, which include a 100-day business recovery plan, are supported by professional services firm EY and consultancy firm McKinsey, among other large businesses. In terms of SME liquidity, meanwhile, the International Finance Corporation (IFC) is organising a rapid response effort among members of its SME Finance Forum (which includes 77 financial institutions and 46 fin-techs, as well as development lenders). Among the steps taken is the decision by Kenyan telecoms operator Safaricom to allow small business customers to transfer $1,400 per day via its M-Pesa mobile money service, up from $650 previously.

The picture is more mixed in the garment industry. On the one hand, leading brands recently endorsed a Call to Action by the International Labour Organization to help keep garment manufacturers afloat. As a minimum, the plan, which is endorsed by the International Organisation of Employers as well as leading unions, commits high-street brands to pay for finished goods and goods in production.

It also obliges them to keep lines of communication with their suppliers open and, “should financial circumstances permit”, provide direct financial support to factories. Signatories include Primark, H&M, C&A, Adidas, M&S, Ralph Lauren and VF Corp. Assuming brands deliver, the agreement will mark a turn-around from their initial response to the pandemic.

The experience of suppliers in Bangladesh, the world’s second largest clothing exporter, shows the other side of the story. The country’s textile manufacturers saw the cancellation of nearly 900m orders worth more than $2.9bn in the immediate aftermath of lockdown measures in the US and Europe, according to the Bangladesh Garment Manufacturers and Exporters Association. A separate report by Penn State University’s Center for Global Workers’ Rights and the Worker Rights Consortium, meanwhile, reveals that 72% of buyers that cancelled orders refused to pay for raw materials already purchased by their suppliers.