As turbine dimensions increase, wind operators are using advances in remote technology and scanning to increase the speed and scope of blade inspections. 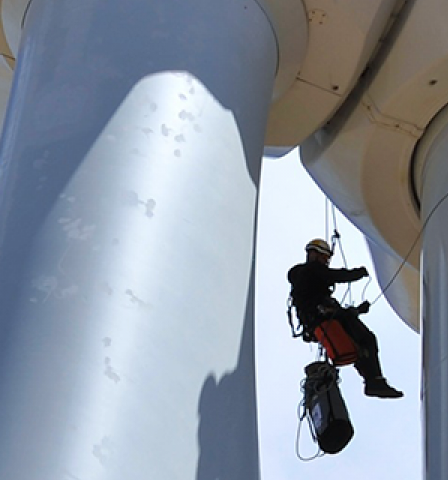 As power market competition intensifies, wind operators are under pressure to maximise the output and lifespans of turbine assets. Some blades now measure up to 90 metres in length and higher replacement costs mean operators are keener than ever to prolong their lifespans, Dennis Roach, Senior Scientist at Sandia National Laboratories, told Reuters Events.

Operators may also want to inspect blades more often as they approach end of design life, typically 20 years, he noted.

Some 65 GW of European wind capacity will reach 20 years of operation by 2028 and 42 GW could represent commercially-viable lifetime extension projects, Wood Mackenzie said in a report published in September 2019. IHS Markit predicts the average age of US wind turbines will rise from seven years in 2018 to 14 years in 2030.

Blades could potentially operate far longer than their design life, but there is little experience on newer, longer blades, Kim Branner, Senior Scientist at the Technical University of Denmark (DTU), said.

“We are getting better at sorting the problems out,” Branner said. “But the gains are roughly cancelled out by the push to go closer to the design limits for newer and longer blades, which may lead to new problems.”

Millions of revolutions and, in many cases, repeated starts and stops, can cause leading-edge erosion and heating and cooling issues. “Without early detection and a serial change in operations to avoid resonance conditions, this has resulted in many complete blade losses totalling millions of dollars,” he said.

Despite continuing technology innovations, operators still typically use hanging platforms or rope systems to inspect blades as these are not greatly restricted by hub height. Some operators have turned to innovative ground-based vehicles that use telescopic platforms to lift technicians to greater heights, Fitchett said.

“People have likened [the robot] to a Swiss army knife, with multiple heads that can be switched out and deployed,” Roach said.

“They are not in the field yet but it’s heading that way,” he said.

A.I. can be used to analyse images collected by robots and drones to learn over time as fault information is fed back into the system.

Data pools are growing as wind fleets expand and going forward the increasing use of sensors will provide even greater data flows.

EPRI is building a database of records for blades and other major components, including reliability projections, damage categorization and correlation.

“With enough historical data, an empirical approach may statistically tell what is most likely to be beneath the surface of a particular defect if identified visually," Fitchett said.

EPRI recently completed a study of visual blade damage assessments and will soon publish the results.

This could be transformative for operators and service companies, allowing ground-based detection and quantification of a sub-surface defect.

Techniques include ultrasound and less well-known approaches such as shearography, thermography, and the use of microwaves, Fitchett said.

“There is experimental non-destructive evaluation work ongoing in this area, but the quantification challenge remains," he said.

Going forward, suppliers will be under increasing pressure to minimise the carbon footprint of blades while also maximising performance.