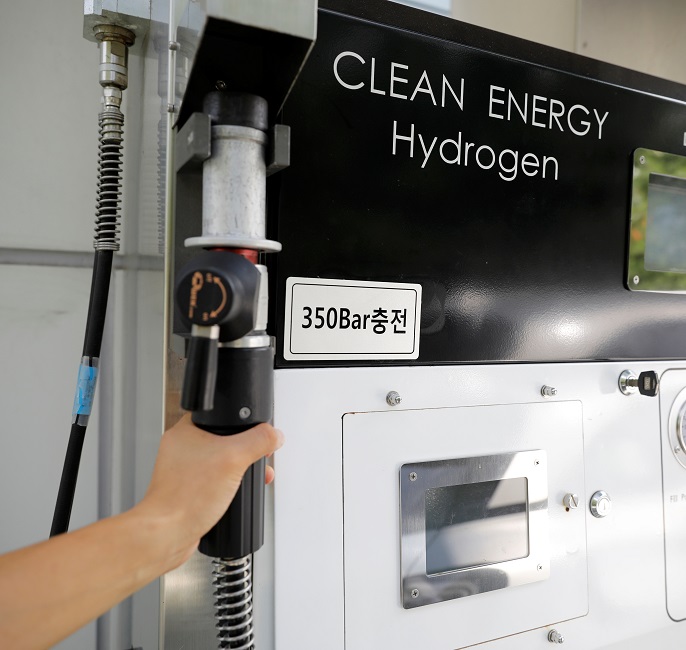 As offshore wind costs continue to fall, a growing number of European energy companies are investing in electrolyzer projects to gain a share of the growing renewable hydrogen market. Electrolyzers use electricity to split water into hydrogen and oxygen, avoiding carbon emissions.

In February, the Port of Ostend and Belgian groups DEME and PMV agreed to develop the world's first commercial-scale hydrogen production facility powered by offshore wind farms. The project partners plan to build a 50 MW demonstration hydrogen electrolyzer plant by 2022 and a large-scale commercial unit by 2025.

Until now, most hydrogen has been supplied through steam gas reforming (SMR), but falling electricity costs have sliced electrolysis costs.

The new consortiums plan to scale up electrolysis capacity at a rapid rate and this will accelerate cost reductions, leading experts told New Energy Update.

Electrolyzers consist of metal-coated anode and cathode electrodes, separated by an electrolyte membrane. This membrane can be made from a variety of materials, including plastic and ceramic, or a liquid alkaline solution of sodium or potassium hydroxide.

Developers can use low-cost materials such as nickel for the electrodes and industrial production lines could drive down costs, van Wijk said.

“As we’ve seen in solar, a mass production process is needed,” he said.

For example, only one compressor is required per electrolyzer which reduces the cost per unit of energy for larger electrolyzers. Compressors can represent around 5% of the electrolyzer system cost and the cost is greater for transport applications. Hydrogen for cars and trucks must be compressed to 350 bars, sometimes even 700 bars, compared with 80 to 100 bars in a normal hydrogen transport pipeline.

To date, much of the electrolyzer development has revolved around chlorine production. Technologies differ between supplier and include alkaline electrolysis, polymer electrolyte membranes (PEMs) and solid oxide cells.

For example, the capital cost of alkaline electrolysis, the most mature technology, is typically lower than for PEM concepts, but it offers a lower conversion efficiency, he said.

Alkaline electrolyzers are likely to remain the most cost competitive in the near-term, Van Wijk said, but interest in PEMs is growing.

"The common argument is that PEMs are more dynamic in operation and can follow the intermittent signal of renewable more closely," he said.

Falling wind and solar costs have transformed the renewable hydrogen business case and now threaten the dominance of SMR systems. Conversion efficiencies are relatively similar to SMR so the price differential going forward will largely depend on the spread between electricity and gas input prices.

Prices for hydrogen from SMR typically range between $1.5 and $2.5 per kilogram. Renewable energy costs of 20 euros/MWh ($22.6/MWh) could yield a hydrogen production cost of around 1 euro/kg ($1.1/kg), van Wijk said.

Last September, the UK awarded new offshore wind projects at around 40 pounds/MWh (44.7 euros/MWh, $50.5/MWh), a fraction of the offshore wind prices seen just a few years ago. An increasing number of wind and solar projects are now being developed on a zero subsidy basis. Some large-scale US solar and wind projects have signed contracts close to $20/MWh.

Oversupply of renewable energy has already created windows of low-cost power in wholesale markets, Glenk noted. The partners in the Hyport Ostend project plan to use excess offshore wind power not required by the grid to supply the electrolyzer plant.

“Electrolyzers can then take advantage of periods of lower power prices while idling during periods of price peaks," Glenk said.

To support early deployment, hydrogen developers have called on EU members to spur hydrogen demand by implementing price support mechanisms and infrastructure programs. Funding to date has focused on research and development (R&D).

“Initial and temporary policy support for electrolysis can be crucial to kick-off progress on the learning curve," Glenk said.

Support measures could include requirements that 5 to 10% of all fuel consumption is sourced from renewable fuels such as hydrogen, van Wijk said. Direct project support could include investment tax credits or tax rebates, measures used to accelerate global solar and battery storage deployment, he said.

The EU's new Horizon Europe research program aims to support hydrogen as a core building block for the Bloc's decarbonation plans. The program will provide 100 billion euros across a large range of industries in 2021-2027.

Major national plans are also underway. Germany's latest Covid-19 economic stimulus package will provide 7 billion euros for hydrogen development. The government aims to increase renewable hydrogen production capacity to 5 GW by 2030 and 10 GW by 2040 with most of the electricity supplied by offshore wind.

"Such a policy change would be supportive of the frequently discussed goal of connecting the different energy segments, such as electricity, heat and transportation," he said.