The Alqueva project in Portugal has spurred new mooring solutions and a fully hybrid model for floating PV-hydroelectric plants. 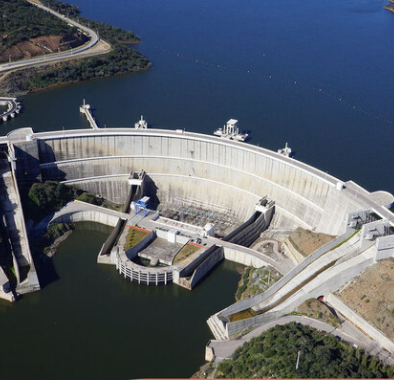 A growing pool of project learnings is improving the business case for hybrid PV-hydro power plants.

Land availability is a growing challenge for solar developers and the cost of floating solar systems is falling. The coupling of PV and existing hydroelectric facilities is seen as a key growth area, allowing operators to optimise output and share existing infrastructure. The global technical potential for floating solar at hydroelectric plants is between 3.0 and 7.6 TW, the US National Renewable Energy Laboratory (NREL) said in a report published in August.

Portuguese power utility EDP is currently developing a 4 MW floating solar project at its giant 518 MW Alqueva pumped storage hydroelectric plant in southern Portugal. The project will feature 11,000 panels at water depths of up to 60 meters, and builds on learnings from EDP's 220 kW Alto Rabagao pilot project, online since 2016.

The Alqueva project will allow EDP to optimise a "new hybridization model" for PV-hydro plants, Miguel Patena, Director of Innovation and Technology at EDP Production, said.

EDP will use the solar facility at Alqueva to power the pumped hydro system, which provides energy storage to the national grid.

A demonstration battery storage system will also be installed to provide fast ramp up and minimise deviations in market bids. EDP is particularly interested in how it can be integrated alongside the solar and hydro supply using the same interconnector.

A second new platform will host a transformer and medium voltage cells, aimed at reducing losses.

The project is supported by changes to Portugal's market regulation in 2019 that allow generators to combine energy from renewable energy sources with conventional power generation.

"However, there is no experience in applying [the new regulation], and it is likely that several aspects have to be revised in the future," Patena warned. EDP must complete several permitting stages for the floating solar facility before final approval, and installation is expected to take around 12 months.

“Licensing is always a major challenge in innovative projects," Patena said. "In this case, being next to a hydro dam, the verification of the structural and mooring design is more demanding.”

The cost of floating PV depends on local site conditions and the scale of the facility. Some large projects in Asia have driven down costs, but for PV-hydro projects in Europe, costs might be 30 to 40% higher than conventional PV plants.

The main differences are the floating platforms and mooring systems, which must secure the facility through large variances in water levels. The cost of the mooring system is higher for deeper water areas and different site conditions require different concepts.

The water depth at the Alqueva dam can change by 30 metres. The mooring system will use a floating perimeter to decouple the main platform from the mooring connection points. The system is being developed by a consortium led by Seaflex, a mooring system supplier, using funding from the European Union's European Maritime and Fisheries Fund.

Seaflex also supplied the mooring at Alto Rabagao, which has a similar water depth and variance. The system features 840 panels, which are fixed into a rocky soil riverbed at eight anchor points. These secured the platform against high winds and wave heights of up to 1 metre.

The mooring at Alto Rabagao added complexity and costs, “but it was decisive to test this model in the most severe conditions to ensure that the project was viable and could progress," Patena said.

Additional benefits of floating solar include smaller environmental footprints than land-based plants, and a cooling effect on the panels that increases the efficiency.

The Alqueva project will tackle first of a kind (FOAK) challenges, but wider deployment of hybrid PV-hydro facilities will require investments in design optimisation and scale, Patena said.

The greatest deployment opportunities will be in Asia, particularly in China, and in South America, where there are large reservoirs and local market conditions that should allow a good return on investment, he said. In Europe, low wholesale prices and tougher regulations dent the business case.

"The economics of it are not there yet," Patena said.

"Being a niche product, we must have the right combination in market price, regulatory framework, permitting and scarcity of cheaper solutions."