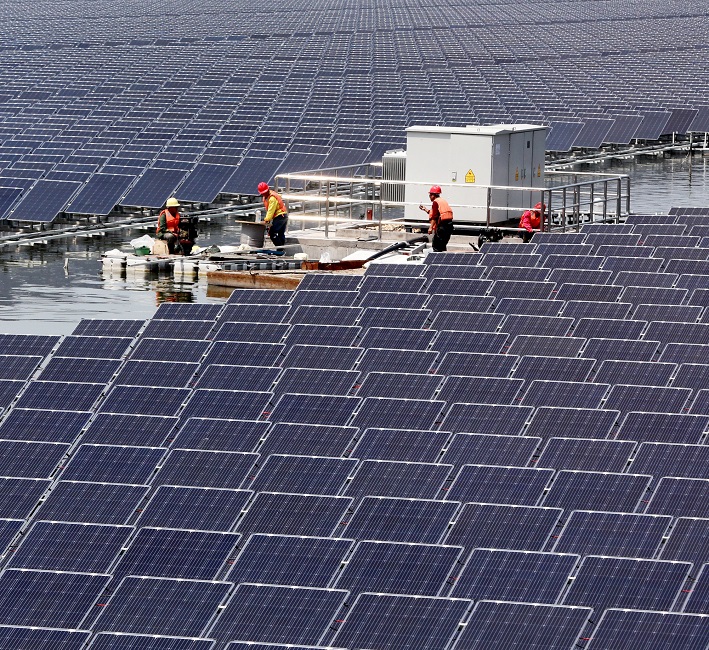 Last month, DNV GL launched a joint industry project (JIP) with 14 companies to develop the first ever best practice guidelines for inland floating solar projects. The consortium includes major energy groups such as France's EDF, Portugal's EDP and Norway's Equinor, as well as specialist floating solar developers from Europe and the US.

Global installed floating solar capacity has hiked from 10 MW in 2015, to 3 GW at the end of 2019, with early activity mainly concentrated in Asia. Growth is spreading and annual installations could rise to over 3 GW by 2022, according to forecasts from Wood Mackenzie. “There is also a strong interest by individual utility reservoir owners that wish to generate additional electricity and revenue from an otherwise unused space,” Robert Spencer, software researcher at NREL and co-author of the US floating solar report, said.

Projects in Asia have shown there is little price difference between floating and land-based solar projects for capacities over 50 MW, Michele Tagliapietra, project manager for DNV GL's JIP, said.

Most projects in Europe and the US have been below 5 MW and the cost of projects of this size in Asia can be up to 15 to 20% higher than land-based projects, he said.

Installed floating capacity remains a fraction of land-based capacity. As a result, developers face investor concerns over cost and reliability, but this should change in the coming years as learnings are rolled out across the industry.

"We believe such concerns can be overcome.”

Asia is currently the most active region for floating solar projects, driven by government tenders and supportive feed in tariffs.

China is developing some 700 to 900 MW of capacity per year and other active markets include Japan and South Korea.

Earlier this year, BayWa r.e. built Europe's largest floating solar city on 18-hectare lake that covers a sandpit site at Zwolle in central Netherlands. The 27 MW Bomhofsplas plant was installed in just seven weeks and the electricity is being sold directly to local residents via a cooperative. Over the last year, BayWa r.e. has built and sold eight floating solar parks in the Netherlands.

Strong growth is also expected in the Americas.

The 4 MW project uses Ciel & Terre technology and is located on a pre-treatment water storage pond in Sayreville. The town issued a public RFP in late 2015, offering a power purchase agreement (PPA) to offset power use at the water treatment facility and related facilities.

“We entered into this project knowing that we had limited land available for a solar installation near the water treatment plant," Dan Frankel, Business Administrator of the Town of Sayreville, said in a statement.

“It’s an ideal approach that makes better use of our pre-treatment pond while dramatically reducing energy costs and offsetting the town’s carbon footprint,” he said.

“As North American developers, financiers and insurance entities strengthen their comfort with the advantages of floating solar, we expect to see significant rapid growth in the region that parallels the rest of the world,” Chris Bartle, Business Development Manager at Ciel & Terre USA, said.

The best practice guidelines developed by DNV GL and partners will be technology-agnostic and focus on five key areas: site assessment, energy yield, mooring and anchoring, floating structures, and environmental impact and permitting.

As a nascent concept, operational learnings in floating solar remain limited. Developers are continuing to adapt their designs and introduce new concepts, Pilskog said. In one example, floating solar group Ocean Sun incorporated learnings from fish farming in its design.

Developers are focusing on reducing the cost of materials, improving reliability and gaining a greater understanding of the cooling effect, Pilskog said.

“Mooring systems to anchor the system in place may range in complexity depending on the level of water level variability and underlying bathymetry [water depth],” Spencer noted.

The module mounting heights for floating solar plants are more restricted than land-based projects and special consideration is required for inverters and medium voltage equipment.

As designs evolve, greater focus will be placed on operations and maintenance (O&M) efficiency.

Currently, many floating systems are not optimized for inspection and maintenance and close-up inspections can be difficult, Tagliapietra said.

Floats, PV modules and DC cables are the most commonly replaced components. "In general all components are more challenging to replace than in ground-mounted systems," he said.

These issues will grow in importance as solar owners seek longer plant lifespans to maximize returns.