In new terrain, where dust can weaken solar insolation by as much as 30%, Masdar’s Shams 1 was bound 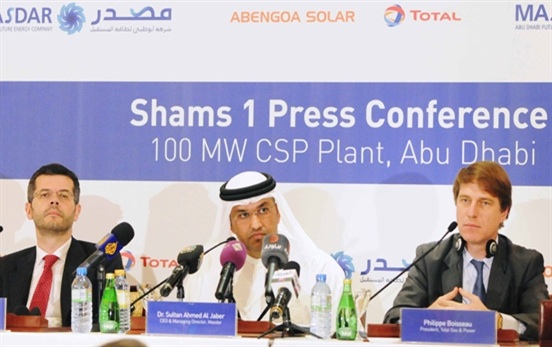 The Abu Dhabi-based Shams 1 project is the region’s biggest solar plant under development and when completed next year will be one of the world’s largest. But getting it off the ground was not as straightforward as anticipated.

Shams 1 was originally tendered in 2008, one year after the conceptual design was proposed. It attracted bids from various consortia, including Saudi Arabia’s Acwa Power and Germany’s Solar Millennium, but the Franco-Spanish consortium of Total and Abengoa was finally selected for a 25-year design, build and operate contract. However, bid selection was delayed for two years (2008 to 2010).

In July 2009, Masdar withdrew the project and announced it would be relocated and re-tendered. Besides funding difficulties during the global recession, the project faced unanticipated technical problems, mainly incorrect estimates of the Direct Normal Irradiance (DNI) in the chosen location, which would have resulted in an efficiency loss of nearly 12.5%.

Masdar had used satellite data to assess solar radiation at the site, but some dust particles were not picked up, as satellite data is often inaccurate with 10% chance of errors. Moreover, the DNI was not modified, and when measured again with more accurate equipment it was apparently less than the forecasted claims. Masdar soon realized that the plant would receive less solar power than expected; construction was halted and resumed a year later when Masdar had a better idea of the power they could collect per square metre.

However, “this parameter cannot be modified as it is not under human control; it is (based on) the characteristic of the site”, explains Dr. Mokhtar Chmeissani, Principle Investigator for Energy and Instrumentation Division at Qatar Energy and Environment Research Institute (QEERI) and Research Professor at the Institute for High Energy Physics.

Masdar also found the plant would require more mirrors to achieve its target capacity, although the extra cost was within the margin of error and would not affect the total cost. To generate electricity, the 100MW CSP plant will now use an increased number of parabolic trough collectors, 768 in total. Developed by Abengoa, the technology consists of mirrors lining rows of sun-tracking parabolic troughs and will rely on dry cooling.

CSP systems can be sized for village power (10kW) or grid-connected applications (up to 100MW), and Masdar has opted to generate the maximum power possible with Shams 1.

Unlike a typical CSP plant, Shams 1 will produce about 18% of electricity with natural gas. Combining hybridization and backup, it will use two separate burners to help regulate production and guarantee capacity – especially in peak and mid-peak periods. Over one year, the second burner could add 3% to the overall energy production, according to the International Energy Agency’s CSP Technology Roadmap.

In the UAE, dust reduces insolation by about 30%, so the average DNI is only 1,934kWh/m2 per year. This is surprisingly lower than other sunny locations, such as Spain, where DNI ranges from 2,000-2,300kWh/m2 per year. This indicates the significant impact of dust storms and haze on solar radiation.

The absence of thermal storage is another difference in Shams 1, likely due to the Green Payment scheme, under which the UAE Ministry of Finance will compensate Abu Dhabi Water and Electricity Co. for the difference between average domestic power generation costs and the plant’s generation cost, proving the country’s political will and support of the project.

Finding the right location is crucial to the success of any CSP project, and so is the calculation of accurate, site-specific solar radiation measurements. Considering that Shams 1 was primarily tendered just one year after the design was presented, it is possible that the project was rushed into commencement and that more time was needed to evaluate the incoming solar radiation.

Other sites appeared to have more solar radiation, but eventually it was confirmed that the plant would be constructed where originally planned, at Madinat Zayed, 120km southwest of Abu Dhabi. The site’s close proximity to the capital means long distance power lines may not be needed, which is an advantage over other sites with high DNI.

The first is the Silicon Photodiode Radiometers, which have lower costs, require less maintenance, and provide higher measurement uncertainty potential. They measure temperature, humidity, wind speed and direction, and are recommended for use in areas without reliable grid power.

“There are many published methods and tools in the market that can provide a good measurement of the DNI”, Dr. Chmeissani told CSP Today. “One can even contract a consultant company that is an expert in this field to do the measurement. The important thing is that one should really understand the errors generated by the instruments he/she is using and then report the mean value and errors associated with this mean value”.

Bordering the UAE from the west, Qatar similarly faces the challenging desert climate. In preparation for a solar-powered desalination pilot project, QEERI ordered a Light Detection and Ranging Device (LADAR), commonly used in astrophysics, to check the clearness of the sky. The device fires a laser into the sky to see how much light is returned after bouncing off humidity, aerosol, and other atmospheric particles, which helps with the site selection.

Despite the temporary delay in 2008, Shams 1 was oversubscribed with financial commitments exceeding $900 million since the triple joint-venture between Masdar (60%), Total (20%), and Abengoa (20%). Masdar newly announced that Shams 1 will operate by the third quarter of 2012, and is planning for Shams 2 in order to meet the emirate’s goal of obtaining 7% of its electricity from renewable energy by 2020.