Is CSP the solution to water poverty in MENA?

Diminishing natural groundwater is a fundamental threat to Gulf Arab states. If the existing desalination plants were damaged, the UAE would only be left with four days of water. But concentrated solar power – a thirsty technology – is emerging as the most promising solution to water poverty in the region. 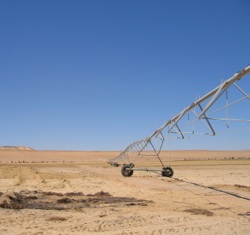 Countries in the MENA region are facing serious water deficits that are expected to worsen unless major investments are pumped into more sea desalination projects.  A ‘worst-case’ scenario would have enormous political implications.  “Iran and Iraq have rivers. We [other Gulf States] don’t. So in the future, they have the upper hand’, warns Sami al-Faraj, of the Kuwait Centre for Strategic Studies.

As things stand, the UAE risks depleting groundwater within 50 years at current consumption rates. But CSP technologies may provide a silver lining to an otherwise grim outlook.

Although rich with oil and gas resources, the GCC states are the poorest in water, relying heavily on desalination projects, which supply 70% of their water needs and drain their budgets.

As one of the most water constrained kingdoms in the region, Saudi Arabia’s water consumption is forecast to reach 7.32 bn m³ in 2030. The kingdom, which considered transporting icebergs from the South Pole in 1977, has pumped nearly 26% of the world’s total water desalination production over the past few years. In the next 17 years, the Saudi government plans to build 16 water desalination facilities worth $14bn, with a combined capacity of 2.1mn m³/d.

The water deficit in the United Arab Emirates (UAE) is projected at 0.84bn m³ by 2030. Last month, officials said that the country spends almost $3.2bn per year on the production of desalinated water, accounting for about 14% of the world’s total output.

The answer lies with CSP

A MED-CSD project recently carried out studies of combined CSP and desalination plants in the south and eastern Mediterranean region, in which it assessed the water demand and deficit as well as of electricity demand.

The MED-CSD report found that all CSP technologies can be combined with thermal desalination systems. But since the main scope of the study was to assess the potential of large scale desalination units with CSP, parabolic dish systems and central receivers were excluded.

Thus, two options of combining CSP with seawater desalination were investigated: reverse osmosis power by electricity from a CSP plant and MED using heat and power from a CSP plant.

“In our example, the renewable share provided by CSP is about 90%; that of PV is 25%, and that of wind power is about 35-40%”, the study stated. As a result, CSP plants were found to save more fossil fuel and replace more conventional power capacity compared to other renewable energy sources like PV and wind power, especially if applied for desalination services.

In terms of feasibility of hybrid CSP water desalination plants in the region, the more profitable technologies were found to be Linear Fresnel mirrors for the solar field technology, and reverse osmosis for the desalination technology.

Of the 72 different studied configurations, only considering the CAPEX for desalination, RO desalination was found to have a lower initial investment cost than MED. However, this cost excluded the maintenance cost over the years, especially the replacement cost for the RO modules every 5 years.

The MED-CSD study stressed that a direct comparison for the desalination unit alone is misleading as the MED unit replaces the heat rejection section of the power plant (cooling tower) as well as expensive condensing stages of the steam turbine. “A regular replacement of membranes for RO must also be considered in addition to the initial investment”.

“MED is an improvement on the older MSF giving two advantages: lower input temperature and higher efficiency. CSP is just replacing the fossil boiler in a steam power station. This means that the technology is the same, only some components are replaced”, explains Dr.-Eng. Hani El Nokraschy, Co-Founder and Vice Chairman of the Supervisory Board of the Desertec Foundation.

Shifting to CSP-MED in North Africa

Currently, the use of desalinated seawater in the MENA countries relies mostly on fossil fuels, which are neither sustainable nor economically feasible - especially considering that oil and gas prices have increased by 300% since 2000.

The region also relies on the over-exploitation of groundwater resources, which results in falling groundwater levels, intrusion of salt water into the groundwater reservoirs and desertification.

“The combination of CSP, to produce electricity, and use of the waste heat for MED desalination is the most economic option, especially when the salt content is as high as it is in the Red Sea and the Gulf”, explains Dr. Nokraschy.

The deployed module can generate 5 m³/d of drinking water, for which it needs a thermal input of 50Kw. This heat is provided by a collector array with an area of 78m², consisting of 16 vacuum tube collectors from the German manufacturer Ako Tec.

In Libya, the Centre for Solar Energy Studies (CSES) in Tripoli conducts research programs in both PV and solar thermal technology within the country. Amongst its main objectives is promoting and performing solar desalination projects.

A 2004 report by Ashour and Ghurbal stated that Libya planned to construct 13 desalination plants with a total capacity of 705,000 m³/d.

Progress in the GCC region

Last year, the King Abdulaziz City for Science and Technology (KACST) launched the National Initiative for Solar Water Desalination (NISWD), which will be conducted in three stages over nine years.

The first phase aims to build a 10MW desalination plant over three years, with a production capacity of 30,000 m³/d. The plant is being constructed at the city of Al Khafji to serve 100,000 people. The second phase aims to build a 300,000 m³/d solar desalination plant over three years, while the third would see the construction of several plants for all parts of the kingdom.

KACST will power the plants with the ultra-high concentrator photovoltaic (UHCPV) technology that is being jointly developed with IBM. This technology is capable of operating a CPV system at a concentration greater than 1,500 suns.

Inside the plant, the desalination process will hinge on a nanomembrane that filters out salts as well as potentially harmful toxins in water while using less energy than other forms of water purification. The technology developed would be licensed outside of Saudi Arabia.

The location of the plant is also a critical factor in its efficiency. “A solar plant with desalination needs to be built close to any coastline. The coastlines in Egypt at the Red Sea or at the West of Alexandria might be good places”, explains Dr. Volker Ludwig, CEO of Dr. Ludwig Intelligent Projects GmbH.

He also notes that there are many advantages in building a CSP plant close to the sea where cold water is available. “The bigger the difference is between the cold end of the turbine (provided by cold sea water) and the hot side (by the medium heated up in the solar field), the more efficient the production of the electricity will be”.

“I expect that about half of the future water demand over the present water usage will be produced from seawater desalination by CSP-MED. This sums to about 75bn m³ per year (about one Nile)”, Dr Nokraschy concludes.