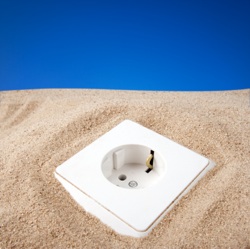 CSP Today: To what extent is oil price volatility prompting fossil fuel exporters in the MENA region to diversify their energy portfolios?

Mr. Khaled El-Askari: Indeed the volatility of fossil fuel prices (particularly oil and gas) is one of the reasons for some countries in MENA to diversify their energy sources. However, this largely applies to fuel-importing countries such as Jordan for example.

In the case of fuel-exporting countries, the motives for energy diversification are multi-fold. These include: the high potential for utilizing the “saved” fuel in higher-value uses, such as industry; the potential for raw and processed fuel exports; utilizing the fuels in applications that don’t easily lend themselves to renewables, such as in transport; and finally, saving the resources for future generations as a sense of national securities.

CSP Today: Is the AfDB likely to increase its renewable energy and related infrastructure portfolios, as oil prices continue to rise? Has the Bank identified any new major CSP projects?

This stems from the fact that the AfDB is committed to the global agenda of combating climate change, and is striving to support its regional members countries (RMCs) in diversifying their energy sources for the reasons outlined above.

The current and pipeline portfolios of AfDB-supported projects include a variety of clean/renewable energy technologies including hydro, wind, and solar power.

For example, the Bank is currently supporting Morocco’s Solar Thermal Power Station Project in Ain Beni Mathar, as part of the country’s major solar power project, which will cover 10,000 hectares and should produce up to 2,000 MW of electricity from state-of-the-art solar facilities composed of photovoltaic and solar thermal energy technologies.

The Bank is also helping Egypt achieve its ambitious plan to satisfy 20% of its energy from renewable sources by the year 2020.

In this regard, the Bank is helping Egypt implement two renewable energy projects, including the Kom Ombo CSP project of a targeted 100 MWe capacity, to be located in the sunny southern part of the country. The project is still at early preparation stage, so procurement has not yet started.

In addition to direct investment finance, the Bank is also supporting some capacity-building activities in these countries in order to prepare project implementation and operating agencies to deal with these new technologies.

CSP Today: What is the likely medium-term impact on CSP projects (under construction or in the pipeline) of the recent events in Egypt and Tunisia?

Mr. Khaled El-Askari: The CSP project in Egypt is still at an early preparation stage, so it is unlikely that it would be affected by the current situation. However, experience from other ongoing (conventional) power projects suggest that the impact, if any, might be limited.

Apart from some small delays to project schedules due to the recent events, no cost-related implications are foreseen.

Mr. Youssef Arfaoui: I’m not sure this will have impact on the project preparation phase; the latest events didn’t disturb much the market apart from delays in the business, because it is a peaceful transition. In terms of project security it may affect the ratio, as both countries are still under transition phase.

CSP Today: What is the best 'first step' to addressing capacity build out (developing local supply chains) in MENA countries?

Mr. Khaled El-Askari: While this could be seen as a very large “first step”, I believe that market demand will provide the main thrust for developing the CSP local supply chains.

However, currently the market in MENA is very small to trigger such signals, with competition outside the home market being unfavorable because of the relatively high cost of the mostly imported raw material component.

Mr. Youssef Arfaoui: But if we take into consideration all projects planned in the MENA region, a joint local manufacturing project in one country can be a good option in order to address the unemployment and reduce the high cost of technology, equipment, spare components, and so on. The shareholders of such a joint local manufacturing project could be the MENA countries.

CSP Today: Which MENA country stands out in terms of providing the policy support, infrastructure and financial framework necessary to support the development of renewable energy?

Mr. Khaled El-Askari: Some countries in MENA, such as Egypt, Tunisia and Morocco, have already adopted policies and strategies aimed at fostering renewable energy development.

While those policies give a strong positive signal to the market, there are still challenges that remain to be tackled. It is difficult to suggest a certain country within MENA as taking the lead in this respect.

The AfDB is aware of such challenges, and is offering its support in the areas of policy and renewable energy-related infrastructure in order to help MENA address those challenges.

Mr. Youssef Arfaoui: A feed-in tariff to enable private investment has yet to be developed and applied properly in the region, such as a feed-in tariff for CSP and export to the European market.

To respond to this article, please write to the editor:

Mr. Khaled El-Askari will be presenting on the role and status of development bank funding at the forthcoming CSP Today MENASOL 2011 conference , taking place May 3-5, 2011 - El Jadida, Morocco. To reserve your place, please click here.