The development of local CSP supply chains promises to unfurl a multi-billion dollar market across the MENA region. But who is taking the first step? 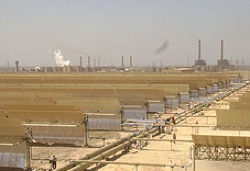 Developing local supply chains for the emergent CSP industry in the Middle East and North Africa (MENA) can only be a good thing. For one, it would reduce local - and global - build and maintenance costs. And for the countries in the region, developing the right skills and technologies to produce CSP components would foster ownership of the industry and generate significant economic benefits.

As things stand, however, the industry lacks enough critical mass for central governments to really get behind it. According to the report, a yearly local output of 250-400MW of installed capacity would be required to make it worth investing in developing the local skills to manufacture high value components such as receivers, float glass production, mirror production and heat transfer fluids.

Unfortunately, the highest value-add elements of CSP production also happen to exhibit high barriers to market entry, and are consequently dominated by a handful of international players with scale and expertise on their side.

MENA countries could both partner with those players as well as leverage existing industries to move up the value chain in secondary components, and away from the current situation where they are largely limited to providing low value added services such as cheap labour.

However, the type of player that could deliver such critical mass and facilitate such a knowledge transfer would only be lured by a rigourous policy structure tht includes support mechanisms such as feed-in tariffs and subsidies.

Currently four CSP plants exist or are under construction in the MENA region: Kuraymat in Egypt, Ain Ben Mathar in Morocco and Hassi R’Mel in Algeria, and Shams 1 in Abu Dhabi. But in Morocco’s case, all the main components were imported, as was the case in Algeria, where even components with low technology demands were imported - mainly because local contractors were not deemed to be 110% able to meet the tight deadlines of the project according to Alexis Gazzo, Senior Manager, Climate Change & Sustainability Services at Ernst and Young and one of the report’s authors. According to the report, local involvement currently ranges from 18-43% compared to the US, where 70% has been reached.

In Egypt, by contrast, roughly 60% of the value of the solar field was manufactured locally and a local enterprise resource planning (ERP) contractor was able to support local efforts. Gazzo comments:  “The local ERP contractors were key - the turbines were purchased from a local manufacturer El Sewedy and international players like Fictner Solar and Flagsol were also supportive.”

Currently the nascent glass production industries in both Eygpt and Algeria provide an ideal ground on which to build mutually beneficial relationships, according to Gazzo, where partnerships with international players have extended beyond mere sub-contacting to encompass research and development. This could help local suppliers to break into the glass mirror space (currently dominated by Flabeg, Rioglass and Saint Gobain), or even the duopoly receiver market (comprising Schott and Siemens/Solel).

Elsewhere, subsidiary structures have worked in the wind power industry. A good example can be found in Morocco, where local firm DLM carried out wind turbine tower work for Gamesa on Tangier's 140 MW wind farm constructed in 2009, and on Essaouira, the Office Nationale de l'Electricité' s 60 MW wind farm constructedin 2006. The production line is flexible and can switch to products demanded by the CSP industry.

But it is likely that in the medium-term, success will come from leveraging existing non-CSP specific industries that could produce secondary components such as cables and piping. Gazzo believes this is the area that holds the most immediate promise.

“Local industry does exist that could prove worthwhile. In Morocco and Tunisia there are successful automobile and aviation production industries and they have transferable production skills to produce, for example, the metallic structures to support mirrors.”

He says that moving up the value chain - even with the support of national government and international companies - is not easy. Again it comes back to the ‘chicken and egg’ quandary of garnering critical mass via subsidies and other mechanisms to support the long-term development of the industry that make it worthwhile for international players to work locally and facilitate the development of local supply chains.

“Recent developments have been largely limited to pilot schemes and local tendering. The root issue is the cost of CSP. Without political commitment to bringing a sustainable industry into a country via support mechanisms and incentives to use local firms via local ERP contracting, then international companies are going to be reluctant to get involved,” he says.

To respond to this article, please write to: Alison Ebbage

*This article was updated 28.03.11. The original verson omitted the Shams 1 project currently under construction in Abu Dhabi.