US operators urged to decommission immediately to prevent cost hikes 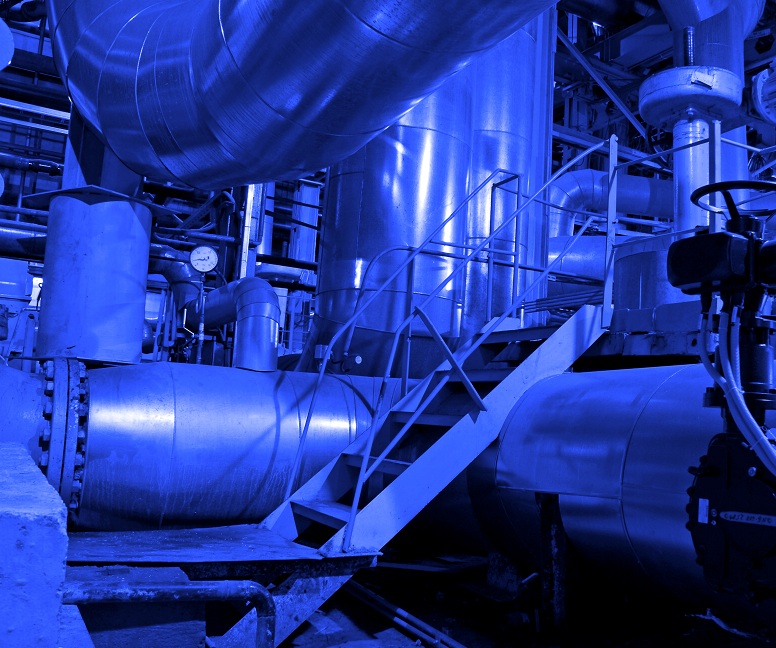 There are currently 17 U.S. nuclear power plants being decommissioned and this will soon increase following a recent spate of plant closure announcements due to sustained low power prices.

The majority of current U.S. decommissioning projects are being carried out under the deferred “SAFSTOR” method of deferred decontamination, but this process incurs the risk of cost hikes, Rothwell said.

U.S. operators build up nuclear decommissioning trust funds (DTFs) based on estimated costs but data from completed projects shows the actual cost of decommissioning has varied substantially, as operators have faced fresh site-specific challenges and regulation which can differ between states.

The variance in costs of three completed ‘immediate’ D&D projects was highlighted earlier this year in a report by the Nuclear Energy Agency (NEA), co-authored by Rothwell, which cited figures from a Pacific Northwest National Laboratories [PNNL] study.

The chart below shows actual costs for the Haddam Neck, Main Yankee and Trojan plants, laid out alongside estimated costs for 14 other reactors. It shows large differences in spending on Project Management, Decontamination and Dismantling (D&D) and Waste Management. 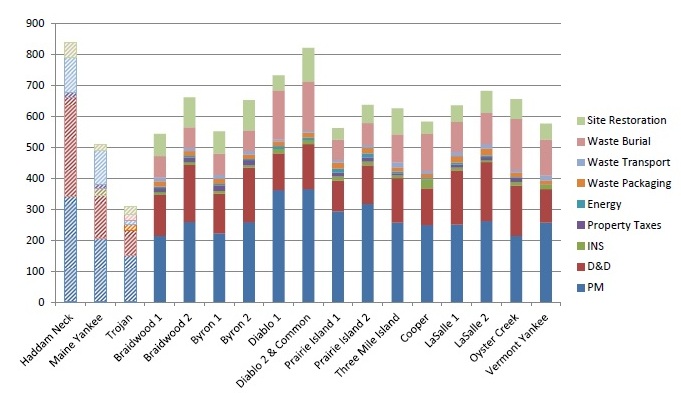 Project management costs tend to be a function of the duration of D&D activities, rather than plant size and this is highlighted by the data from completed projects, Rothwell noted.

Portland General Electric (PGE), licensee of the 1.2 GW Trojan plant, decided to perform the decommissioning of the plant itself and conducted the project efficiently and without major changes or setbacks.

In comparison, the licensees for the 582 MW Haddam Neck plant in Connecticut and the 900 MW Maine Yankee plant chose to contract the D&D work to a decommissioning operations contractor (DOC) and then later in the process they chose to resume execution of decommissioning activities themselves.

In both cases, the management changes led to complications and delays and escalated costs, NEA said in its report.

A major advantage of carrying out D&D activities immediately is that current operations staff have in-depth knowledge of plant specifics, including previous incidents and undocumented facility detail, which avoids unnecessary work-arounds, Rothwell said.

“The maintenance crew have all sorts of implicit, tacit knowledge…If you wait for 60 years they are all gone,” he said.

Actual D&D costs have varied substantially as a lack of identical reference projects has meant operators have had to perform “first of a kind” operations such as the time-consuming task of dismantling main reactor components, Rothwell said.

“It’s cutting up the reactor and the steam generator, these are big pieces of equipment and we are just learning how to do this,” Rothwell said.

PG&E was able to limit the D&D costs for its Trojan plant through its access to the U.S. Ecology low-level waste facility at Hanford, Washington. PG&E was permitted to ship reactor internals to the Hanford facility as one package and avoid some of the on-site cutting-up of components.

At Haddam Neck, the segmentation of the internals proved challenging and took approximately 29 months, according to NEA’s report. Regulations also required the operator to store the internals on-site at the ISFSI.

The duration of D&D activities at Haddam Neck exceeded original estimates, as did the total radiation exposure accrued during the operations, NEA said.

“Decontamination of exposed faces of buildings and foundations were also extensive tasks,” it said.

The results of an environmental survey at the Trojan plant site indicated no radioactivity had spread to the environment, including surface water and groundwater, which also limited costs.

By deferring D&D activities for a substantial time, operators raise the chance of chemical or radiation leaks spreading, which can require further D&D work and incur higher costs, Rothwell said.

According to the NEA’s report, waste management costs do not necessarily depend on the capacity of the plant.

“Waste costs appear to be more sensitive to the management strategies and solutions selected or assumed, for the specific plant, and the related unit costs individually applied. The accessibility of waste management routes can even determine the way the decommissioning of the reactor is undertaken,” NEA said.

PG&E's ability to ship the reactor vessel for the Trojan plant as a single package reduced the volume of waste and the number of radioactive shipments, and also reduced personnel exposure. However, NEA noted that without regulatory changes, the single package approach will not be available to other commercial nuclear plant decommissioning projects in the US.

In contrast, waste management costs for Haddam Neck were driven up by high volumes of waste produced, "mostly attributable to the release criteria and clean-up levels adopted by the State of Connecticut," the report said.

Regulatory risk is another reason to commence D&D immediately as regulation is more likely to increase if there is a long time period before SAFSTOR facilities are decommissioned, Rothwell said. 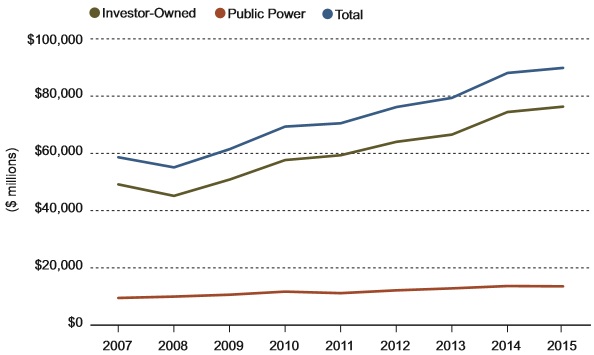 Rates of return for DTFs have been lower than expectations, and operators which have accelerated closure plans should leverage current staff expertise and optimize decommissioning schedules to allocate decommission fund portfolios so the “liquidity matches your plans,” he said.

The first chart above shows there are larger differences between actual decommissioning costs than for estimated costs. By sharing more data, operators could leverage lessons learned to improve estimates and reduce future costs, Rothwell said.

The U.S. could create a national decommissioning agency to centralise project expertise, similar to organisations already in place in UK or Spain, he said.

In the UK, the state-owned Nuclear Decommissioning Authority (NDA) contracts out decommissioning work to Site Licence Companies (SLCs) while in Spain national nuclear waste agency Enresa is responsible for dismantling nuclear power facilities and management of the waste.

“Until we get past this first-of-a-kind and get to nth-of-a-kind, everyone is learning,” he said.