The mental focus of plant employees must be shifted from generation optimization to facility dismantling to avoid a shortage of decommissioning engineers as nuclear roles multiply, workforce analysts told Nuclear Energy Insider. 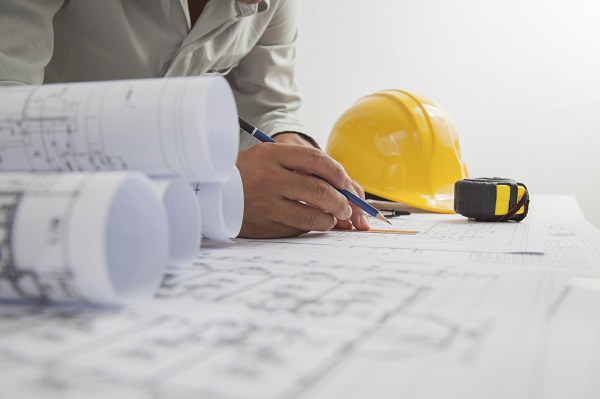 The demand for skilled nuclear staff is forecast to peak around 2020. (Image credit: suphakit73)

Around 18,000 engineering and construction industry (ECI) personnel work in the nuclear industry, with about 50% employed in the decommissioning sector, according to the Nuclear Workforce Assessment (NWA) published in November 2015 by the Nuclear Energy Skills Alliance (NESA).

Based on the current nuclear new build schedule, overall nuclear workforce is expected to grow from 77,880 in 2015 to a peak of 111,280 in 2021. Around 2,200 new full time, high-level Science, Technology, Engineering and Math (STEM) employees will be needed per year.

Under the NESA’s current assumptions, the ECI workforce is set to increase to 26,000 by 2020 but pinch points have been identified in mechanical and electrical engineering skills and decommissioning trades. In addition, current forecasts predict a decline in decommissioning demand through to 2029 and are based on data which does not include demand from plants yet to be stopped.

“It is anticipated that with further analysis this trend will be reversed from 2019 onwards to the point when all AGRs [Advanced Gas-cooled Reactors,] are being decommissioned by circa 2029,” the NWA said.

The AGR fleet represents 7.6 GW of the U.K.’s 8.8 GW nuclear power generation capacity and the 1.2 GW Sizewell B Pressurized Water Reactor is currently scheduled to operate until 2035. All the plants are operated by EDF Energy, the UK subsidiary of France’s EDF which is planning to kick start a nuclear renaissance in the UK with the construction of its 3.2 GW Hinkley point C project. 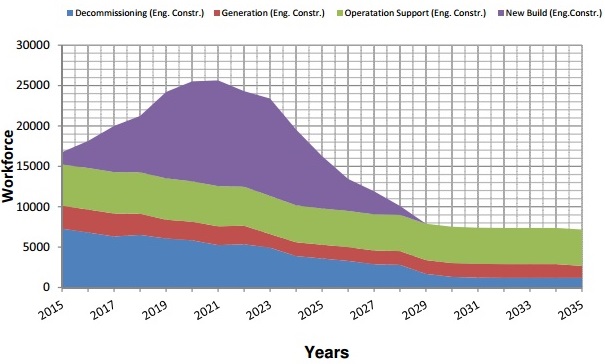 EDF announced on 16 February that generation at Heysham 1 and Hartlepool had been prolonged by five years to 2024, with Torness and Heysham 2 due to stay online for a further seven years to 2030. Based on current projections, the pool of engineers available in the 2020s is unlikely to be sufficient to meet decommissioning demand during this period.

NESA notes that it can take in excess of ten years for an engineer to acquire sufficient nuclear experience at an expert level. With demand expected to peak in around five years, graduate programs are likely to be less suitable for resourcing the decommissioning sector than upskilling the existing nuclear workforce.

The Nuclear Skills Strategy Group (NSSG), a subgroup of NESA partners tasked with securing the required supply of qualified and competent personnel for the UK’s nuclear industry, told Nuclear Energy Insider that the pivotal and fundamental aspects of working in nuclear power generation do not change if switched to decommissioning.

Changing established mindsets between generation and decommissioning sector roles is the “biggest hurdle” to transferring staff, even though the principles of leadership, project management and compliance remain the same, an NSSG spokesperson said.

“Those that have lovingly maintained a plant for years can find it difficult to dismantle it. The work becomes a series of projects to be completed, so a task and finish mentality needs to be developed to replace a mindset which has previously been about sustaining operations,” the spokesperson said.

Decommissioning requires innovation and problem-solving to address some of its pressing challenges and these opportunities must be promoted more effectively to the existing workforce, according to NSSG.

Mid-career skills gaps were also identified during the assessment and Stephen Barrett, Sector Manager Nuclear at the ECITB and member of NESA, told Nuclear Energy Insider that the age profile of decommissioning engineers showed a potential dip in qualified personnel around the 40 year-old mark.

The ECITB is looking to deliver speed-to-competence programs to assist in the role changes from operations to decommissioning and close any gaps, Barrett said. Employers could look outside to industries such as oil and gas for allied skill sets that could be transferred into a nuclear setting, he said.

“The challenge is getting people across from other industries and ensuring the nuclear industry has an understanding of the workings of other industries that are applicable to nuclear. For example, the procedures and controls are almost the same as for nuclear and you just have to add the fact that you are working with radioactive materials,” Barrett said.

Interventions and activities that address these recruitment and retention issues, as well as the support given to the industry to plug the identified gaps, are detailed in the NESA plan for sustaining nuclear skills that was published alongside the NWA last November.

The ECITB is taking the lead on project and program management, which was categorized as another skills pinch point and prioritized by NESA. This area could be alleviated by outside recruitment, although Barrett stressed that the different approaches to nuclear and conventional energy project management needed to be clearly understood.

Decommissioning projects tend to proceed more slowly than operations and require more time to complete tasks. Project schedules can be impacted by tasks taking longer than expected, including activities such as acquiring records for ageing plant infrastructure and testing for radioactive contamination.

The ECIBT is working with the cross-industry Association for Project Management (APM) on delivering a Registered Project Professional program to support the transfer of skills into the nuclear sector and will share knowledge and experience in industry meetings later this year.