Opinion: UK's first new reactor could be an SMR

The UK government should re-evaluate its nuclear power strategy and provide more resources to accelerate the development and approval of Small Modular Reactor (SMR) designs so that consumers can benefit from lower costs and the UK's nuclear renaissance can be cemented. 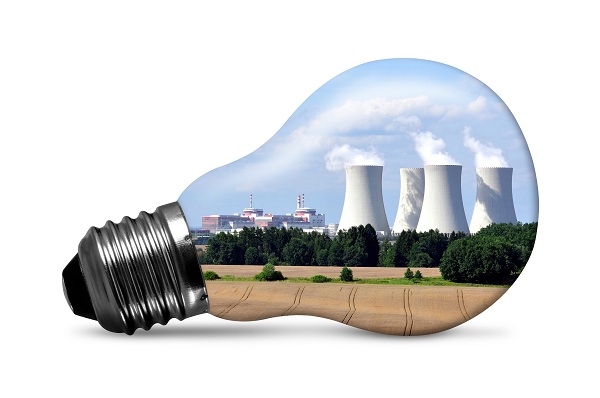 While continuing to back EDF's 18 billion pound ($25.6 billion) Hinkley point C EPR project, the UK government launched last month phase 1 of its SMR competition to gauge developer and investor interest and plans to publish a roadmap for SMR development later this year.

This roadmap must set a clear path towards streamlined Generic Design Assessment (GDA) procedures for SMR plants and provide further clarity on siting, appropriate to the specific safety cases of the new designs.

Developers such as NuScale and Westinghouse are already working with UK nuclear firms to prepare a cost–efficient supply chain to support the short build timelines of SMR designs. Investment in UK manufacturing and R&D should create export opportunities.

The UK government plans to invest at least 250 million pounds in nuclear R&D over the next five years and by prioritizing resources for SMR technologies, design approval phases could be fast-tracked.

SMR developers could build highly competitive generation facilities by around 2025, when the UK’s coal plant fleet will be completely shut down and EDF plans to start up its Hinkley Point C reactor. NuGen and Horizon Nuclear Power are also aiming to complete large-scale plants by around that time. 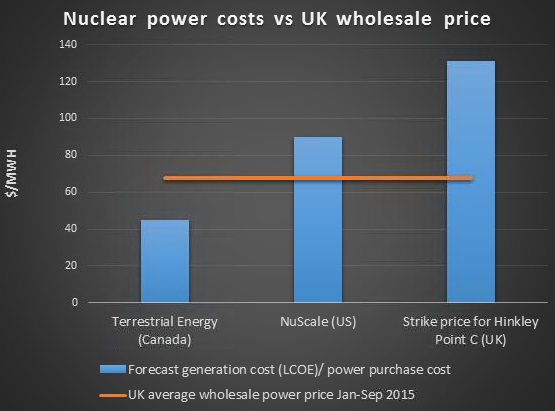 Plant generation costs are based on developers’ predictions for multiple reactors.
Note: LCOE of the Hinkley Point C plant is not available.
Wholesale price is top of average price range published quarterly by the European Commission.
All costs converted into dollars to give an indicative comparison.

The UK can learn from the regulatory progress taking place in the U.S. and Canada. According to centrist think tank Third Way, nearly 50 companies in US and Canada are developing next generation nuclear technology, armed with $1.3 billion of private capital.

U.S. vendors and utilities have formed a new SMR industry group to unlock financial and regulatory resources and accelerate deployment in US and abroad. The U.S. government recently increased access to the technical, regulatory, and financial support during the design review phase and raised its $12.5 billion loan guarantee program for innovative nuclear energy projects- including SMRs.

Oregon-based NuScale has progressed the furthest in the U.S. regulatory process and plans to submit the license application for its SMR design to the Nuclear Regulatory Commission this year and deliver its first commercial plant in late 2023, in Idaho.

NuScale benefits from a U.S. Department of Energy funding agreement which provides the firm with $217 million towards the design certification application and other commercialization engineering, analysis and testing. The developer has already spent several years in preparatory dialogue with the NRC and the firm has projected it will take three and a half years to receive Design Certification approval after submission this year.

In the UK, the EPR was the latest design to receive full GDA approval, in a process which took five years to complete.

In Canada, Terrestrial Energy is in the process of submitting its Integral Molten Salt Reactor (IMSR) design to the Canadian Nuclear Safety Commission (CNSC) for pre-licensing Phase I Vendor Design Review. Ontario-based Terrestrial Energy is the first advanced reactor developer to enter the CNSC’s review process and the firm plans to build its first commercial plant in Canada in the 2020’s before broader deployment in North America, and beyond.

The CNSC has said engineered passive systems would be given “much more credit in the safety case than active systems” and said it could liaise with the regulator of the country where the design is to be deployed first, or where it has had pre-project licensing review. This would allow the CNSC to “fast-track an understanding of the design and the regulatory issues addressed in the vendor’s or first-adopter’s country,” CNSC said.

Lessons learnt from U.S. and Canada licensing procedures must be shared to avoid unnecessary delays in the UK.

Europe’s conventional power generators have been hit by falling electricity prices on the back of surging renewable energy deployment, energy efficiency measures, and a sluggish economic recovery. Shale gas and LNG supplies have dented gas prices and wind and solar power costs are falling year-on-year. This has made the 92.50 pounds per MWh strike price for Hinkley point C, agreed in October 2013 for a 35-year period, look expensive.

In addition, EDF has repeatedly delayed the Financial Investment Decision for the Hinkley Point C project and major construction delays on earlier EPR projects at Olkiluoto in Finland, and Flamanville mean these plants are yet to start operations.

Financial Times reported March 29 that senior engineers at EDF have called for the Hinkley Point C project to be delayed by at least two years, and recommended a redesign of the reactor technology.

In a White Paper submitted to EDF top executives, the engineers made the case for a “new EPR”, calling on the company to redesign the current reactor technology to make it smaller, cheaper to build and less complicated, FT reported.

In response to the report, EDF said Hinkley Point C would be operational in 2025, as planned and the UK government has also reaffirmed its commitment to the project.

However, for a broad-based and sustainable nuclear industry, the government and the nuclear sector must allocate appropriate resources to SMR designs that are able to compete in a power generation market continuously impacted by technological advancements.