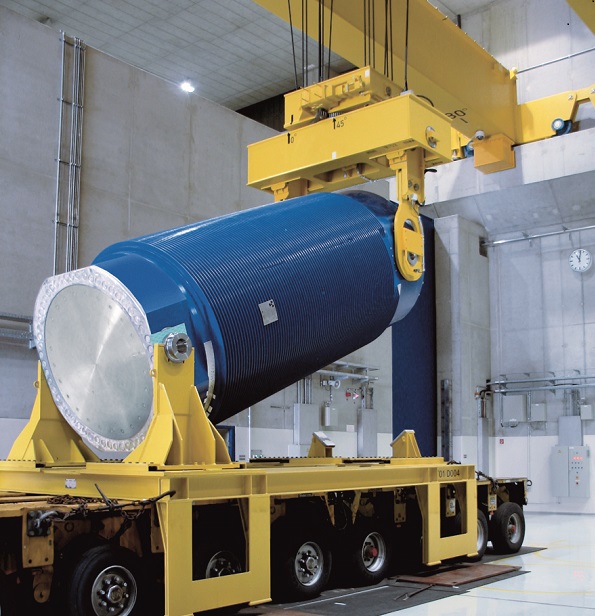 Inside the interim storage facility at the Brunsbuttel plant. (Image credit: Vattenfall)

After a series of setbacks, a federal government-appointed commission announced April 27 its recommendations for allocating clean-up costs between the state and nuclear power firms.

The Kommission zur Uberprufung des Kernenergieausstiegs (KfK) recommended nuclear operators transfer 23.3 billion euros ($26.4 billion), which includes a 35% risk-related premium to close the gap between provisions and costs, to a state fund. The government is not expected to formally accept the proposal and approve legislation to govern the fund until later this year.

Power utilities EnBW, E.ON, RWE and Vattenfall have already set aside around 38 billion euros for nuclear decommissioning and low-level waste disposal. In a joint statement, the firms said they could not accept the KfK’s proposal mainly due to what they called a “huge risk premium” which “overburdens the concerned energy companies’ economic capabilities.”

The firms said they were willing to accept a risk premium to enable a “consensus” during talks with the KfK, and had presented financial information while offering to go to their “utmost economic limits.” The KfK had exceeded these limits with its suggested risk premium, the operators said.

Europe’s power utilities have been under pressure from low power market prices amid growing renewable power supply. Moody’s downgraded RWE’s credit rating by one notch to Baa3/P-3 May 13, citing a weak power price environment and “the risk that the recent recommendation by the [KfK] that a significant premium should be paid by the German nuclear generators will be an additional financial burden for RWE.”

The ratings agency said “there is a good likelihood that, while there may be further negotiations on the final calculations of the underlying [nuclear] liabilities, a solution will be found and passed into law.”

The requirement to fund the externalized liabilities will reduce the operators’ financial flexibility and the premium will result in a direct additional debt burden of “several billion euros” for the nuclear industry, Moody’s said.

“Should an agreement not be reached and passed into law this year, Moody's believes the issue will remain a significant overhang for the companies,” it said.

Delays to choosing final waste repository sites are also impacting decommissioning plans, which must be in place by 2022, the national deadline to phase out nuclear power set by Chancellor Merkel’s government after the Japanese Fukushima disaster in 2011.

The Final Repository Commission, set up by the German Bundestag in 2014, is tasked with making recommendations for the final repository site selection process while developing selection criteria for the safe disposal of radioactive waste.

“The estimates for the start of operations at a repository stretch from 2045/50, as the earliest option, into the 2080s. Accordingly, it would only be possible to start on the closure of the final repository after the operating period, either in the 80s or only after 2130,” Guldner said in an address to the nuclear industry May 5.

“One of the main objectives in the management of radioactive waste is not to impose any unreasonable burdens on future generations. This objective cannot be reconciled with a process which may possibly take 150 years,” he said.

The Konrad mine near the city of Salzgitter has been identified for the storage of low and medium level waste, but additional sites are likely to be needed after Germany’s remaining plants close. The selection of a permanent site for high level material remains under discussion.

“A major consideration is the impact of delayed decisions over all nationwide final repositories, including those for low and medium level radioactive waste. Delays are an issue because they have to be taken into consideration when planning interim waste solutions on site,” she said.

Vattenfall’s preparations for decommissioning are well underway. These include prioritizing the implementation of proven and existing automation processes that ensure safety and minimal exposure to radioactive material during the dismantling process, Kuehberger said.

Waste disposal costs are higher in Germany than elsewhere in Europe because the waste is buried in deep geological clay formations. Utilities tend to prioritize spending on minimizing the volume of waste to be treated and stored, Borrmann told Nuclear Energy Insider.

“Very low level contaminated material is decontaminated so it can be cleared as conventional waste or recycled material. This process is well defined and the clearance process is meticulously controlled by the authorities, which makes it expensive but ensures high standards,” he said.

The system can be tailor-made to meet existing knowledge management structures and can allow firms to respond to constantly changing decommissioning environments. It can provide a return-on-investment within a short period, Borrmann said.

Going forward, the clarification of waste disposal timelines should incentivize investments by firms looking to enter into Germany’s growing decommissioning market. These firms can provide additional innovation and help to drive down costs.