The German government needs to resolve uncertainties over the final storage of nuclear waste as this remains the key challenge for operators, Ralf Gueldner, Chief Operating Officer of E.ON’s nuclear fleet, said.

The federal government has made it clear that any decommissioning costs are to be borne by the operator but “challenges and uncertainties” remain over waste, he said.

Germany is yet to designate a sufficient number of waste storage sites and Parliament has set up a commission to set out the terms for new repositories.

“From our point of view, decommissioning of our power plants is a well-known process with predictable costs. There is a well-established and successful costing system in place,” Guelder said.

“But there are unresolved big issues on the final storage of both low and medium active and highly active waste, which must be corrected by the federal government,” he added.

Germany’s nuclear phase out plan, announced in 2011, will see all of the country’s plants closed by the end of 2022. Until 2011, nuclear power supplied a quarter of the nation’s power from 17 reactors, according to the World Nuclear Association. 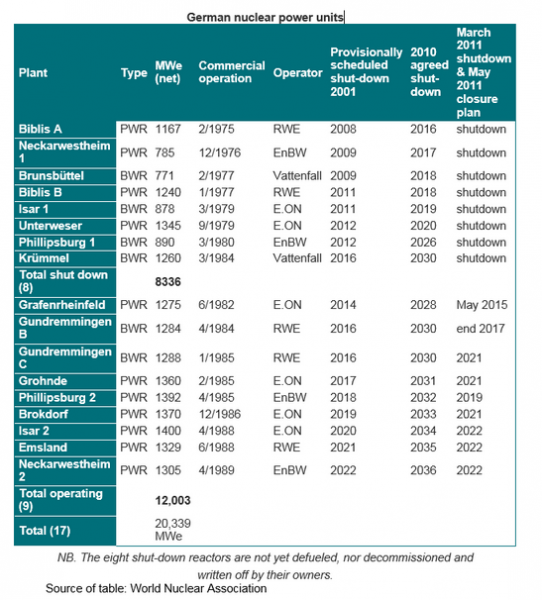 E.ON already has experience in nuclear plant decommissioning, having completed the neutralising of the 640 MW Wurgassan plant following its closure in 1997.

Decommissioning of E.ON’s 630 MW Stade Plant in the state of Lower Saxony is at an advanced stage.

E.ON plans to finish the dismantling of the nuclear part of the plant in 2017, after which the company is to break down the non-radioactive waste, which will take a further two years.

On the basis of their experiences, E.ON assesses that decommissioning costs could reach around Eur1.2 billion for its plants.

This includes the post-operational phase, the dismantling of the plant, the waste management and final disposal costs of the plants.

As Germany moves away from nuclear power, E.ON will remain a key participant in the decommissioning space.

E.ON’s 880 MW Isar 1 plant, located on the river in the rural district of Landshut, Lower Bavaria is currently in the approval stage for dismantling.

E.ON believes its accruals for decommissioning costs are appropriate, and these have been checked regularly either by financial authorities or auditors.

The cost of decommissioning ENBW’s 350 MW Obrigheim nuclear power plant could cost in the region of Eur500 million ($559.1 million), a spokesperson for operator EnBW, said.

The Obrigheim plant, based in southwest Germany, was shut down in 2005 and the decommissioning process is ongoing.

The dismantling of the plant will be financed by ENBW’s contingency reserves and the company has carried out the decommissioning phases of the plant in accordance with its budget allocations, the spokesman said.

This is an approach that will be used for the decommissioning of other EnBW nuclear power plants.

“When we dismantle our other nuclear power plants, such as the Phillipsburg 1 and Neckarwestheim 1 units, we will benefit from the experience in Obrigheim. However, the specific projects are adapted to the respective installations, and thus not fully transferable from one system to another,” the ENBW spokesperson said.

“The challenges [for projects] are particularly in the area of control of the resulting material flows [nuclear waste], and project management,” he added.

Operators are held responsible, not only for the dismantling costs, but also the storage and the safe confinement of the waste that their plants produce.

The companies are allowed to accumulate the funds on a tax-deductible basis.

“In Germany, nuclear regulation is organized in “dual responsibility” shared between the federal and the state levels.” Michael Schroeren, of the federal ministry for the environment, building, and nuclear safety, said.

“The States are the ones who are holding direct responsibility for nuclear safety in their territory. This means that their administration is keeping an eye on the nuclear installations,” he added.

“The states are obliged to enforce the safety regulations. On the other hand, the federal level is in charge of controlling the state authorities,” Schroeren added.

Although this does not result in the federal authorities dealing with companies directly, they may instruct the state authorities to take certain measures if necessary.

Schacht Konrad, a former iron ore mine, has been approved to store a capacity of 300,000 cubic metres of low and medium active nuclear waste. The unit is expected to begin operating from the decommission deadline year of 2022.

Additionally, in 2013 efforts were redoubled to find other suitable repositories for all types of nuclear waste.

A joint commission of experts, appointed by both chambers of parliament, is currently designing criteria that will form a base for the search.

Results of that commission are expected by mid-2016 and there are no figures released as yet on the full costs of this process.