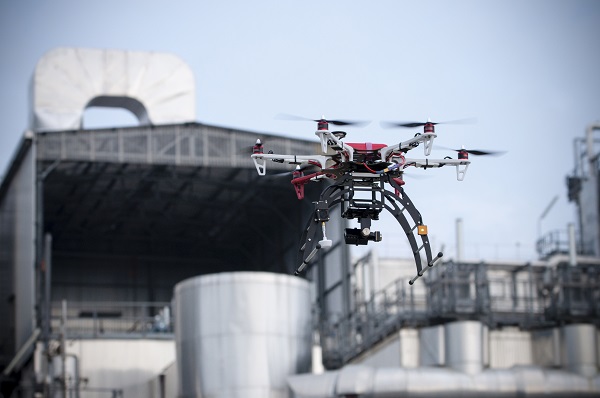 Many large-scale industries are turning to the latest technology, such as drones, to optimize costs.

The National Decommissioning Authority has said Site Licence Companies (SLCs) must focus on value for money contracts in the coming years after planning savings of around 1 billion pounds ($1.4 billion) between 2016/17 and 2019/20 to meet government objectives.

The NDA has sought to improve the competitiveness of UK suppliers and on January 28 it pledged 500,000 pounds to the “Innovate UK’s Energy Game Changer” fund. NDA called for SME’s to transfer new technology-- in areas such as virtual reality, sensors and data optimization-- to the decommissioning sector.

The NDA’s direct and indirect spending with SMEs totalled almost 1 billion pounds over the last three years, meeting the target of 20% of spending set by the NDA.

The UK government has increased its target for spending on SME’s across all industries, to 33% by 2020. This should set a similar trend for the NDA as it expands its engagement with small firms over the next four year spending plan, widening the gateway for small firms looking to access the nuclear decommissioning market.

Matt Tuck, Managing Director of Matom Ltd (a SME) and Chair of the Wales SME Steering Group, told Nuclear Energy Insider that there has been a lot of progress towards greater involvement of smaller firms, and barriers that have previously deterred non-nuclear supply chain entrants are being removed.

Steering Groups have allayed SME fears over entering the nuclear industry but firms need to be more innovative about how they could offer construction and manufacturing services, he said.

“The industry needs some sort of quality assurance system to use SMEs and professional certificates are standard and transferable into the nuclear sector. Any sector is difficult to get into if it is a new area for your business, but the considerations are the same: what is our unique selling point?” Tuck said.

The Fit for Nuclear (F4N) program, which was developed in 2011 by the Nuclear Advanced Manufacturing Research Centre (AMRC) and is set to be replaced by an alternative scheme this year, has proved a useful tool for businesses to spot gaps in manufacturing.

More than 250 SMEs have reached the final phase of the program with 55 already achieving F4N status. The Nuclear AMRC recently surveyed 258 F4N participants and, of the 134 that replied, 70% said the program had increased their confidence about entering the nuclear market. 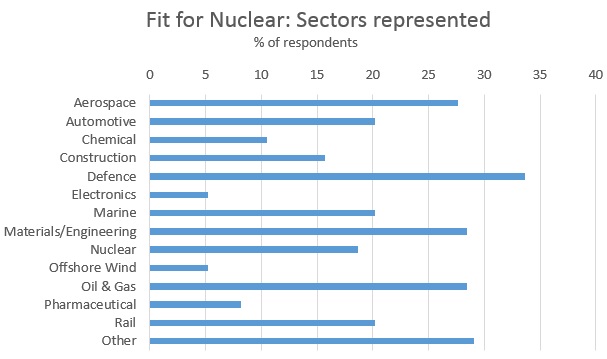 Data sourced from Fit for Nuclear documents. Companies were asked to indicate any markets that account for at least 10% of sales turnover. There were 134 respondents.

Despite the increasing confidence of firms, more has to be done to encourage local suppliers.

Industry feedback to the NDA’s September 2015 Draft Strategy, published by the NDA in January, highlighted the need to develop the supply chain and enable SMEs to improve their competitiveness across the entire estate.

Five regional NDA Estate SME Steering Groups, which include representation from the relevant SLC, Tier 1 to 4 suppliers, as well as local or regional governments, identify and alleviate arising problems affecting SMEs sub-contracted at Tier 3 and 4 in the supply chain and communicate to the wider industry.

The Groups identified payment terms as a major concern, as most SMEs struggle to operate outside a 30-day payment agreement. Contracts have now been adapted by the Site Licence Companies (SLCs) to adjust the terms with Tier 2 suppliers who had previously been requiring 90- and 120-day payment.

Insurance costs have been raised as an issue for smaller firms as firms are currently required to notify insurers that they will be working on a nuclear site. However, specific insurance is not required as all nuclear-related liabilities are covered by the SLCs under the 1965 Nuclear Installations Act. The NDA is currently reviewing its insurance guidelines.

The NDA will set out more proactive measures to assist SMEs and improve their competitiveness in bidding for decommissioning contracts across the entire nuclear estate when it publishes its five-year strategy in April.

UK decommissioning offers significant business opportunities in non nuclear-specific activities, such as dismantling and storage services. Tuck said companies could gain a competitive edge by being innovative in their contract proposals, such as proposing a more efficient way of working rather than developing a high-end technical piece of nuclear-specific equipment.

Changes to procurement frameworks have allowed small firms to offer innovative ideas into established supply networks. One example is the NDA’s Shared Service Alliance (SSA), which has fostered collaborative and strategic procurement across the estate and provided attractive opportunities to the supply chain.

Matom Ltd, which is based in Conwy, North Wales and provides decontamination solutions and radiological protection, took advantage of the improved access to contracts. As part of the SSA, it supplies Magnox, the SLC which operates twelve decommissioning sites in the UK.

The UK government is continuing to drive innovation through initiatives such as Innovate UK’s Energy Game Changer competition, which opens on March 28 and invites small businesses outside the energy sector to propose disruptive technologies as solutions to long-standing challenges.

NDA’s provision of 500,000 pounds to the fund represents a quarter of the 2 million pounds in total funding. The decommissioning authority told Nuclear Energy Insider that it is particularly interested in proposals that deal with data optimisation and inspection work, as opposed to standard on-site operational or decommissioning contracts.

“The UK is home to a number of world-leading companies in a wide range of cutting-edge fields such as robotics and computer gaming. We want to harness this dynamic and creative thinking in order to address some of the long-term challenges the nuclear decommissioning industry faces,” Melanie Brownridge, NDA’s Head of Technology, said in a statement.