Finding a workforce may be nuclear's largest challenge

The global nuclear industry faces many challenges, from the technical, including waste management and fuel availability, to the political, including regulation and social acceptance, but finding sufficient workers may be its largest obstacle of all. 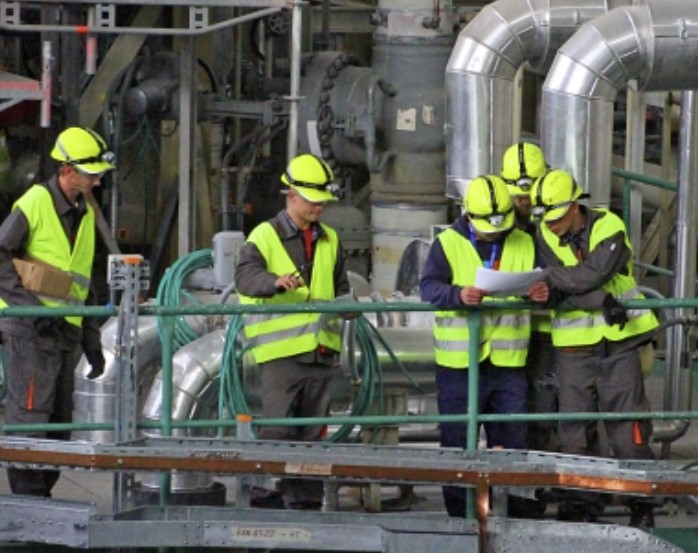 A nuclear power programme needs a skilled workforce from a wide range of backgrounds. (Source:IAEA/A.Evrensel)

In a recent blog post, the CEO and Executive Director of the American Nuclear Society (ANS) Craig Piercy lamented that, as climate pressures and increasing investment lead to an expanding nuclear power industry, sector heads were growing concerned by a lack of a workers.

“Clearly, if the U.S. nuclear industry is going to deliver on the promise of long-term operations of the current fleet and a significant commercial expansion of new technologies, it will need to hire and train tens of thousands of people, many of whom will either come from nonnuclear fields or are still in high school today,” Piercy wrote.

Meanwhile, Britain is planning its own ambitious expansion of its nuclear industry over the next few years, and many countries in Europe, threatened by an energy supply squeeze, are considering expanding the lives of existing plants and adding new reactors.

A collaborative macroeconomic “input/output” study by the OECD Nuclear Energy Agency (NEA) and the International Atomic Energy Agency (IAEA) ‘Measuring Employment Generated by the Nuclear Power Sector’ helps give a broader stroke understanding of the problem.

Direct employment for a single unit 1,000MW advanced light water reactor during site preparation and construction at any point in time for 10 years is around 1,200 professional and construction staff, or about 12,000 labor years, the study shows.

Approximately 600 administrative, operation, and maintenance, and permanently contracted staff are employed annually over 50-year operation, or about 30,000 labor years.

Around 10 years of decommissioning needs some 500 people employed annually, while over some 40 years to manage nuclear waste, another 80 people are employed.

Total direct employment in the nuclear power sector of a given national economy is therefore roughly 200,000 labor years over the lifecycle of a gigawatt of nuclear generating capacity, the report concludes.

And this is just direct employment.

Within the U.S. nuclear energy sector, almost 100,000 people are directly employed in high-quality, long-term jobs, but this number jumps to 475,000 when secondary jobs are included, according to the U.S. Nuclear Energy Institute (NEI). 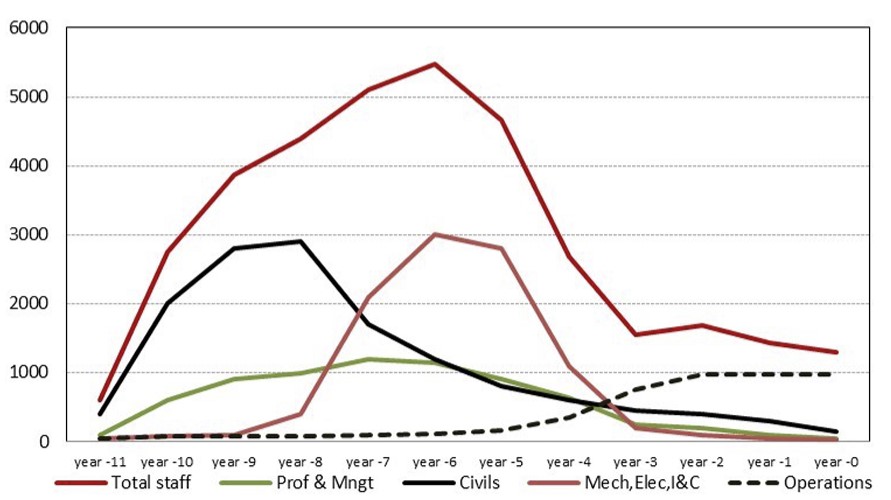 In May, the British government announced sweeping and ambitious plans for nuclear power, including tripling capacity by 2050, or by 24 GW, and pumping over 2 billion pounds ($2.3 billion) into the sector to 2030.

Each large-scale nuclear power plant could support up to around 10,000 jobs at peak construction, the government says.

“With the UK government’s new targets, we will see several pinch points when new projects overlap where the sector will struggle to find the right skills. This goes beyond nuclear, with a lack of skills in engineering, STEM and construction globally,” says Policy Analyst at the UK Nuclear Industry Association Georgina Hines.

The British government is yet to outline how it will bolster a skilled workforce to fit these plans but meanwhile, for the one plant under construction today, developers have set up educational centers and programs to help local people acquire the relevant skills, she says.

These include EDF – the operator behind the UK’s only plant currently in construction, Hinkley Point C – setting up a Welding Centre of Excellence nearby and new training programs at local colleges around the site of the next expected large project, Sizewell C.

Rolls Royce SMR is due to welcome the first set of apprentices this autumn at its iHub innovation center in Derby, a dedicated training facility set up as part of the company’s initiative to boost nuclear capability in Britain.

The site will introduce an extra 200 apprenticeships each year for at least the next ten years to create a pipeline for nurturing talent, Rolls Royce SMR says.

The country’s divorce from Europe has prompted a more expansive strategy when finding new people, according to NuclearJobs.co.uk, a web portal for recruitment in the British nuclear industry.

“Since Brexit, the potential of supply from the EU has been strangled due to the administrative burden involved in sponsoring work visa’s. This has had an effect of levelling the global playing field and as a result we are seeing increased applications from, and engagement with, more candidates from continents further afield,” a spokesperson said.

Young people today are highly motivated by social issues such as climate change, and it is this enthusiasm for creating a better world that will help fill posts in industries that can position themselves as part of the solution.

“There has been increased interest in the clean energy sector in recent years, particularly with younger groups, as the global community works to address the immense challenges climate change presents,” says Vice President of Marketing and Communications at NuScale Diana Hughes.

“New degree tracks and training programs have resulted in the emergence of a new generation of scientists, engineers and operators whose skills will be critical in the global energy transition.”

NuScale is taking active steps to ensure a trained workforce will be readily available for when its VOYGR SMR power plants become operational, Hughes says, including the creation of its Energy Exploration Centers (E2 Center), a power plant control room simulator that employs state-of-the-art computer modeling.

So far, three U.S. universities – Oregon State University, the University of Idaho, and Texas A&M University - have been awarded government grants to support installation of the centers, while a fourth is planned for the University Politehnica of Bucharest to support Europe’s next generation of nuclear experts, technologists and operators, she says.

It is precisely this kind of hands-on actions by companies that will attract the necessary new talent, says the Director of North Carolina State Nuclear Engineering Outreach, Retention & Engagement Program Lisa Marshall.

“What I really get joy out of is when I ask the students how it’s going, and they’ll come back and say they helped a graduate student with a laser project or that they just got to do their first preparation of samples for material analysis and they’re just shining because they were given the opportunity to do this,” says Marshall.

Campuses are finding the nuclear field is attracting a wider variety of interested candidates, from those studying at community colleges to retired military personnel.

Nearly one in four nuclear workers are veterans, according to the U.S. NEI.

Active participation by the companies who need the workers such as those by NuScale and a joint program by GE and Cape Fear Community College which includes on-the-job training, helps fund the pathway for potential technicians.

“There’s nothing like scholarships and fellowships to assist our students so tha  they don't necessarily need that second or third job and instead can concentrate on their studies,” says Marshall.