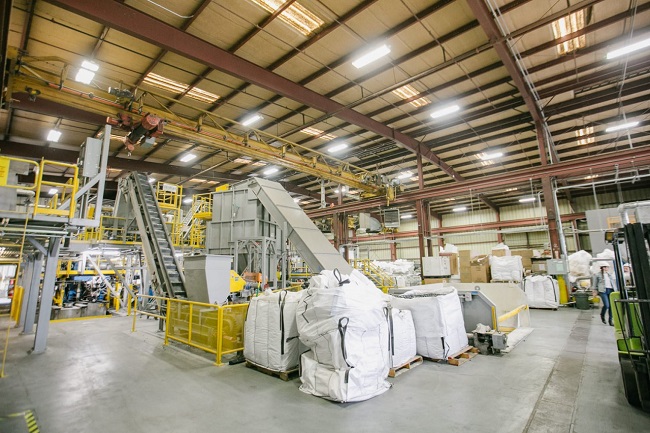 INEOS Styrolution and Americas Styrenics (AmSty) announced on Sept. 22 joint plans to build a 100 ton/day facility in Channahon, Illinois, that will use the Agilyx technology to recycle polystyrene used products like foam cups.

Engineering design for the Channahon facility is underway, with construction and commissioning as the next phases. It will be the biggest facility of its type and represent the next generation of recycling technology, the companies said.

"Discarded single-use items like polystyrene foam and yogurt cups can now go right back to the same applications over and over at the same purity and performance," said Greg Fordyce, INEOS Styrolution president, Americas.

"Polystyrene is particularly advantageous for advanced recycling because it can be ‘unzipped’ back to its original liquid form, styrene monomer,” said Tim Barnette, vice president for polymers and sustainability at AmSty.

Other plastics are not recycled back to its monomer but instead to intermediates, he added.

In 2019, the Regenyx facility in Tigard, Oregon, became the first of its kind, with annual capacity to convert 800,000 pounds of polystyrene into recycled styrene monomer (RSM) using Agilyx's pyrolysis technology. That is equivalent to about 30 million foam cups recycled per year.

In addition to recyclability, "polystyrene products can offer sustainability advantages where less material is required,” Barnette added. This is because a polystyrene foam cup is 95% air, he said.

Sasol said that its new low density polyethylene unit, the last part of the Lake Charles Complex expansion, did not suffer any damage from Hurricane Laura and "commissioning activities have resumed," according to information posted by the company on Sept. 21.

"The unit's beneficial operation sequence will be initiated once the site is fully energized," the company said.

The plant has 420,000 tonnes/year capacity. Sasol had said in June the plant would start by September. It had intended to start the unit nine months ago but there were delays caused by an explosion.

As for all the other units, Sasol said it will only be able to confirm preliminary reports of limited damage caused by Hurricane Laura once it is able to restart the entire complex, and that will occur as soon as the local utility fully restores power probably by mid-October, according to information posted on the company website on Sept. 21.

Hurricane Laura made landfall on Aug. 27 near Sasol’s Lake Charles complex. As of Sept. 21 removal of debris, repair work and startup planning continued on site, it said.

Sasol preliminarily assessed damage of the complex´s 14 manufacturing facilities and associated utilities and infrastructure shortly after the hurricane impact.

The company said at the time that here was moderate wind damage to cooling towers and some insulation, process equipment, utilities or infrastructure.

This will allow the restart of two ethane crackers and derivative units, according to the information on the website.

Sasol´s progress toward securing a partner in its U.S. base chemicals business is far advanced and was not impacted by Hurricane Laura, according to the website.

Entergy Corporation said on Sept. 22 that as of that date its utilities had restored power to 910,000 customers, or nearly 99% of those affected by the impact of Hurricane Laura three and a half weeks earlier, but that work continued in the hardest hit area at Lake Charles.

“Restoration workers continue to repair and rebuild damaged high-voltage transmission lines that will bring power into Calcasieu and Cameron parishes, including the Lake Charles area,” the company said.

Work completion would allow power restoration to the remaining customers who are able to take power by Sept. 30, it added.

Hurricane Laura damaged Entergy's transmission and distribution systems early on Aug. 27. This resulted in 600,000 outages at its peak. It affected more than 900,000 customers in total.

Canada-based Inter Pipeline Ltd. said on Sept. 22 it entered into a definitive agreement to sell a major portion of its European bulk liquid storage business for $535 million to the CLH Group with part of the proceeds to be used to help finance the ongoing construction of a PDH/polypropylene project.

Christian Bayle, Inter Pipeline’s president and CEO, said that funds from the transaction “will be used to reduce debt, strengthen our balance sheet, and assist with financing our large capital expenditure program, including the Heartland Petrochemical Complex."

The PDH/PP project is located near Edmonton.

The American Chemistry Council (ACC) reported on Sept. 17 that for August the overall specialty U.S. specialty chemicals volumes were off by 9.3% compared with the same month last year.

Volumes stood at 102% of their average 2012 levels in August, equivalent to 6.9 billion pounds, it said.

On an on-year basis, there were gains in the cosmetic additives, electronic chemicals, and flavors and fragrances markets.

Specialty chemicals are materials manufactured mostly for a unique performance. They differ from commodity chemicals such as resins as commodities may have multiple applications.

Specialty chemicals tend to carry a higher price and are mostly transported by truck. Commodities are moved by railcars, in bigger volumes.

Year-to-date sales and captive use was 53.5 billion pounds, a 3.8% increase compared with the same period in 2019, the ACC said.