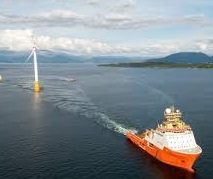 The UK government has set a new target of 1 GW floating wind capacity by 2030 and will invest 160 million pounds ($207.3 million) in UK offshore wind ports and infrastructure to achieve its target of 40 GW of offshore wind by 2030, Prime Minister Boris Johnson announced October 6.

Johnson unveiled a new "build back greener" plan in which every home in the UK will be supplied with offshore wind power by 2030.

The UK is already the world's leading offshore wind market with over 10 GW of installed capacity. Technology improvements, deployment learnings, and competitive tenders have driven down the cost of fixed-bottom offshore wind technology, spurring deployment across Europe. The new UK offshore wind investments would be directed at Teeside and Humber in north-east England, Scotland and Wales, and will create 2,000 construction jobs and support up to 60,000 other roles in ports, factories and supply chains, according to the government.

UK authorities are currently developing a new centralized offshore transmission system to minimize the cost of rapid growth in offshore wind power in the coming years.

The new UK grid design could support clusters of projects further from shore and reduce the need for energy storage.

The EolMed project is located 18 km off the coast of southern France and will feature Ideol's floating barge foundation. Turbine installation is scheduled for 2023, MHI Vestas, said.

MHI Vestas has also supplied turbines to the WindFloat 1 and Windfloat Atlantic floating wind projects in Portugal and the Kincardine project in Scotland.

The European Commission and eight European countries bordering the Baltic Sea signed a declaration September 30 to work together to accelerate offshore wind deployment.

Signed by the EC, Denmark, Germany, Estonia, Latvia, Lithuania, Poland, Finland and Sweden, the Baltic Sea Offshore Wind Declaration pledges to improve power transmission and supply chain infrastructure in and around the Baltic Sea, through political, economic and technological cooperation.

There is currently 2 GW of offshore wind capacity operating in the Baltic Sea and Denmark already plans to build a new energy island to accommodate new projects.

Measuring around 400,000 square kilometres, the sea could potentially host as much as 93 GW of offshore wind capacity, based on a report by the EC.

On September 22, the UK and Netherlands announced plans to develop the first offshore wind interconnector between the two countries.

The UK's National Grid and Dutch grid operator Tennet have agreed to launch a feasibility study for the construction of an offshore multi-purpose interconnector (MPI) to connect 4 GW of offshore wind capacity planned in UK and Dutch waters, the operators said.

The new offshore interconnector could be the first of many as Europe ramps up renewable energy targets.

On September 17, the EC unveiled how it plans to reduce EU greenhouse gas emissions by at least 55% by 2030, compared with 40% under current policy measures.

The EC has tabled an amendment to the European Climate Law to include the 55% emissions target and the commission will publish detailed legislative proposals on how to achieve this by June 2021. Based on current National Energy and Climate Plans filed by EU member states, renewable energy could reach 34% of power generation by 2030, it said. The commission has pledged to reform the EU Emissions Trading System, which could significantly benefit renewable energy developers.

The projects will receive a surcharge value of 62 euros/MWh, the maximum available.

In contrast, a solar tender held in September was oversubscribed, luring 675 MW of bids for the 258 MW of available capacity. The average allocated surcharge value was 52 euros/MWh and values ranged from 48 euros/MWh to 54 euros/MWh, the network agency said.

A new tender to promote renewable energy coupled with storage was also oversubscribed. Germany allocated 677 MW of capacity, of which 394 MW were allocated to 27 solar plus storage projects and one other undefined system combination. The remainder was allocated to "individual systems," the agency said.