As the UK floating wind industry calls for innovation funding, developers like Cierco are building alliances to gain a competitive edge. 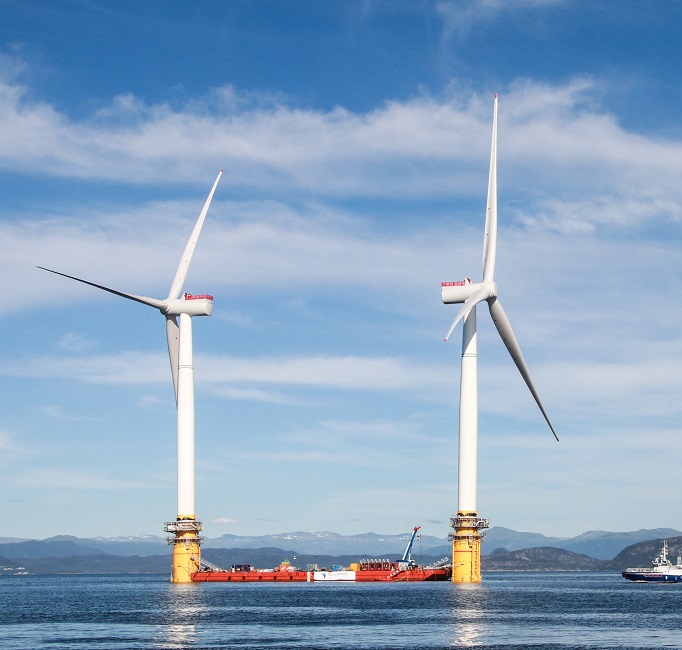 A snap election in the UK on December 12 has raised uncertainty over Brexit and wider policy support for the emerging floating wind sector.

Their report, 'Floating Wind-the UK Industry Ambition,' highlights a lack of pre-commercial funding for floating wind projects and recommends the government implement a special contract for difference (CFD) auction framework to support emerging floating wind technologies. Such a mechanism could boost UK floating wind capacity from 50 MW to 2 GW by 2030, the report said.

The UK is a leader in floating wind deployment but the removal of the U.K.'s renewable obligation (RO) support mechanism and lack of clarity over post-Brexit funding mechanisms has slowed progress. Global floating wind activity has hiked and other nations could overtake the UK in the coming years. 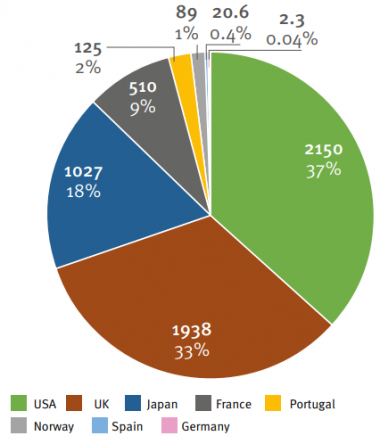 "Floating wind is still pre-commercial, requiring subsidy to de-risk the technology," researchers at the University of Strathclyde and consultancy DNV GL, said in a joint report last month.

"However, the removal of the UK’s Renewables Obligation has created a gap for long-term support of pre-commercial floating wind projects, the report, 'Offshore wind, ready to float?' said.

"Developers are left with the Contracts for Difference (CFD) as the primary route to long-term subsidy but it favors cheaper, more mature technologies like bottom-fixed offshore wind," the report said. The UK's latest CFD round in September awarded 5.5 GW of fixed-bottom offshore wind projects at prices between 39.65 and 41.61 pounds/MWh ($51.1/MWh-$53.6/MWh), some 30% lower than prices awarded in 2017.

In this context, UK-based floating wind developer Cierco is taking a pro-active approach to pre-commercial development.

In September, Cierco was allocated a CFD for its 14 MW Forthwind project in Scotland at a strike price of 39.65 pounds/MWh. Due online in 2023, the project aims to demonstrate the performance of two 7 MW turbines, or one larger next generation turbine, paving the way for a larger floating wind project in a second phase.

The Forthwind floating project would represent a crucial pre-commercial step for Cierco, ahead of larger projects in the UK and the US.

Cierco has conducted a request for interest (RFI) process to identify the most promising floating wind technologies and plans to take an ownership stake in the pre-commercial project development stage, Mikael Jakobsson, founder and managing director of Cierco, told New Energy Update.

"We have some eight-to 10 companies that look more promising from a design point of view and we're looking at how we can take some of those forward," Jakobsson said.

"We are engaging in the pre-commercial stage. We are looking at taking some opportunities forward to be active in that space, rather than passive," he said.

Comprised of five 6 MW Siemens turbines in water depths up to 120 meters, Hywind Scotland cost NOK2 billion ($219 million) and was heavily subsidized by the UK's RO program. Hywind Scotland received an estimated 25 million pounds ($32 million) from the RO in December 2017-November 2018, according to the 'Offshore wind, ready to float?' report.

Cumulative number of projects by foundation type to 2022 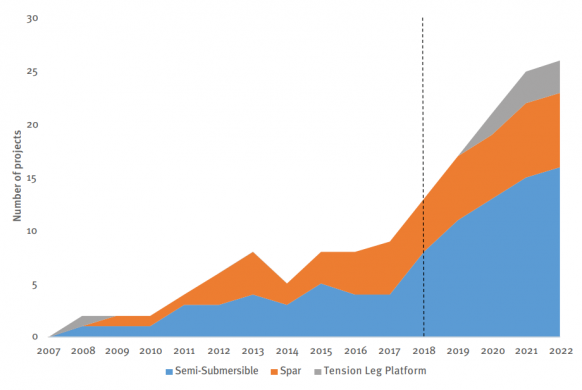 Note: Does not include projects in early planning.

The removal of RO funding has made UK developers more reliant on EU innovation support, such as the Horizon 2020 program and the European Investment Bank’s InnovFin products.

Brexit uncertainty has dented UK participation in these programs. Horizon2020 grants to UK companies fell 40% between 2015 and 2018, to 1.1 billion euros ($1.2 billion), despite UK government pledges to guarantee funding for successful bids, analysis by the Royal Society shows.

A lack of clarity over replacement measures for InnovFin and other EU funding measures has impacted development in the UK, Jakobsson said.

"There have been opportunities where we could have progressed with [these] mechanisms that are out of our reach right now, that we don't have access to any more," he said.

Cierco is now planning alliances and investments that will enable it to capitalize on any future support mechanisms implemented by the next government.

"We are trying to be progressive...so that when the time comes, when you need to start investing heavily, we have a much better clarity," Jakobsson said. "To make sure we have the balance between exposure and outlook."

An "innovation CfD" [iCfD] mechanism would allow more expensive pre-commercial offshore technologies to compete against one another for a guaranteed strike-price.

The iCfD could represent a separate pot for technologies such as floating wind, tidal stream, wave power, "offering strike prices above 150 pounds/MWh," the University of Strathclyde and DNV GL said in their report.

"Whilst the IPPA [innovation power purchase agreement] may still be appropriate for single floating foundation installations, using turbines with a combined capacity below 5 MW, the commissioning of the 30 MW Hywind array in Scotland indicates that the technology is capable of larger-scale application and could fit better within the remit of the iCfD," the report said.

An iCfD should also take into account specific site characteristics, such as those that impact energy yield and economics, but aid technology development, Jakobsson said.

"There may be really good low wind sites-- really good demonstration sites-- but without this adjustment, they would never come forward," he said.

A contract length of around 15 years may be sufficient for a pre-commercial R&D assessment, in line with the CfD offered for commercial projects, Jakobsson said.

The innovation mechanism may also need to stipulate turbine capacities or specifications to provide transparency to bidders and ensure a level playing field, he said.

The UK government currently plans to hold the next CFD allocation round in 2021 and will continue to review policy on emerging technologies such as floating wind in the context of recent CFD auction results, a spokesperson for the Department for Business, Energy & Industrial Strategy (BEIS), told New Energy Update.

“Any form of low-carbon innovation or tech must represent best value for money for our hard working taxpayers," the spokesperson said.

RenewableUK will continue to work with its members on a more detailed future market design, Luke Clark, Head of External Affairs at RenewableUK, said

"We look forward to discussing the future of floating offshore wind in the UK with Ministers once the [December 12] election has concluded," Clark said.

Cierco is looking to use UK pre-commercial success as a springboard to the U.S. market.

The deep waters off the U.S. West Coast holds vast offshore wind potential. California alone holds 112 GW of technical offshore wind capacity, of which 96% is in water depths of over 60 meters. The U.S. National Renewable Energy Laboratory (NREL) has identified six potential offshore construction sites off the California coast for a total capacity of over 16 GW.

Cierco is looking to develop a demonstration project in the U.S. and is one of 14 companies deemed eligible to participate in commercial tenders for sites on the U.S. Outer Continental Shelf, Jakobsson said.

"We have floating project activities in motion…The elegance of the floating foundation, different to the fixed bottom proposition, is that if you establish a design or a path for a demonstration project, you can apply that in multiple sites and markets. Being a small company, we need to be very effective in moving in the space we know, first in the UK, then into the U.S.," he said.

"We have an ambition to see the first pre-commercial floaters of full-size out there by 2025," he said.

"For the time being, we have confidence that the UK will provide mechanisms that will allow us to move forward with our strategy."