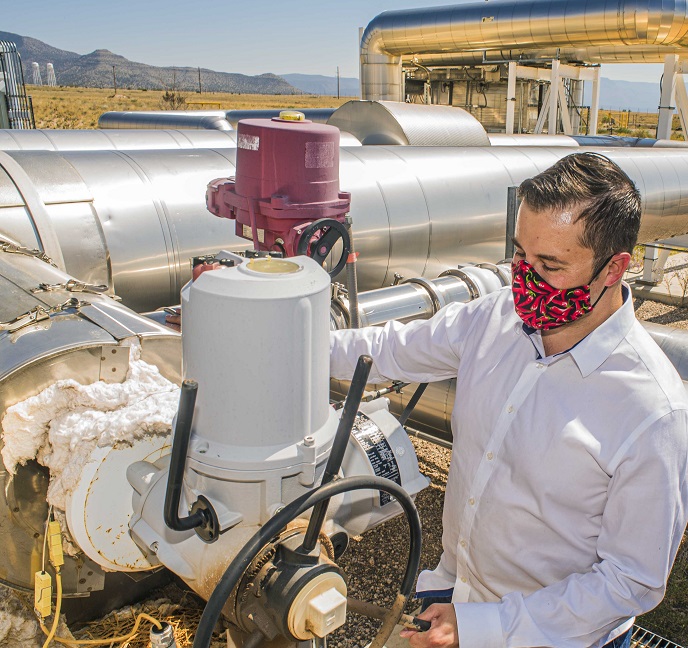 The valves must provide constant heat transfer and fluid flow and withstand extreme temperatures, pressures and flow rates that can be worsened by low outdoor temperatures. Materials can swell, bend and warp, requiring maintenance and reducing plant output. Valve issues were identified among a number of key performance risks in the world's first global best practice report for CSP plants, published by the US National Renewable Energy Laboratory (NREL) in June.

Sandia and partners will use a new design and materials to improve reliability at key stress points in the valve and minimise costs, Ken Armijo, project lead at Sandia, told Reuters Events.

“Thermal-mechanical stresses will be the most important to consider from a performance and reliability standpoint,” Armijo said.

The design could also reduce the number of valves required and maintenance could be performed far faster than current methods, he said.

The valve could accommodate alternative HTMs to molten salt and be used in other high-temperature energy sectors such as nuclear power and petrochemicals.

Sandia was allocated a $2.5 million grant from the Department of Energy (DOE) for the valve research.

The DOE aims to reduce the cost of CSP with 12 hours storage to $50/MWh by 2030, down from an estimated cost of $103/MWh in 2017. The department will soon announce the winner of its Gen3 CSP program to build a high-temperature CSP system using either liquid, solid particle, or gaseous materials. Sandia is competing against Brayton Energy and the National Renewable Energy Laboratory (NREL) for a $25-million DOE grant to build a pilot plant. Other high-temperature projects are underway. This year, a group of European companies will build a pilot ceramic particle concentrated solar tower plant at a Barilla pasta factory in Italy. The 'HiFlex' plant will use centrifugal solar technology developed by the German Aerospace Centre (DLR) to supply heat for the drying of pasta.

To address the extreme stresses on the flow control valves, Sandia and partners are developing a self-contained thermal management system (STM) and a heat pipe valve stem that distributes the heat more evenly, minimising stresses at welds, seals and gaskets.

The STM is an alternative to "heat tracing," a commonly-used mechanism for pipe temperature management. The STM consists of a heater and temperature sensors which are controlled by a distributed control system (DCS).

Heat distribution is improved through an integrated heat pipe that increases conductivity through the valve stem.

Sandia is considering a range of manufacturing approaches within its techno-economic analysis and will define its cost target by the end of the second quarter, Armijo said.

To minimise costs, the team plans to simplify the design of the valves as much as possible and reduce the required number of valves and flowmeters.

The reduction in valve numbers will depend on the system design, Armijo said. For its U.S. DOE Gen 3 CSP 1 MWth pilot-scale design, Sandia is considering placing the flow control valves after pumps and in recirculation loops for greater flow control, he said.

Sandia is also developing a quick-change design that will allow the packing to be replaced without disassembling the valve opening mechanism or removing the valve bonnet or bolting.

"This could greatly speed up the maintenance process and could eliminate packing configuration errors which could impact system operation," Armijo said.

To date, most valve faults have been due to inappropriate valve selection or poor operations and maintenance (O&M) practices, Bruce Kelly, senior engineer at Solar Dynamics and co-author of NREL's best practices report, told Reuters Events.

"Mismatches include valves which are properly sized for design flow conditions, but are much too large for startup (low flow) conditions," Kelly said.

"Poor maintenance includes failures to replace defective heat trace cables [or] trying to extend the replacement intervals for the stem packing," he said.

Flowserve will manufacture two prototype valves for the project, one of which will incorporate the quick-change packing system.

Kairos will test the valves and other molten salt instrumentation using a bespoke isothermal batch flow valve test system located at its facility in Alameda, California.

This rapid test approach should help Sandia meet its target of a fully-tested final valve design by the end of 2022.