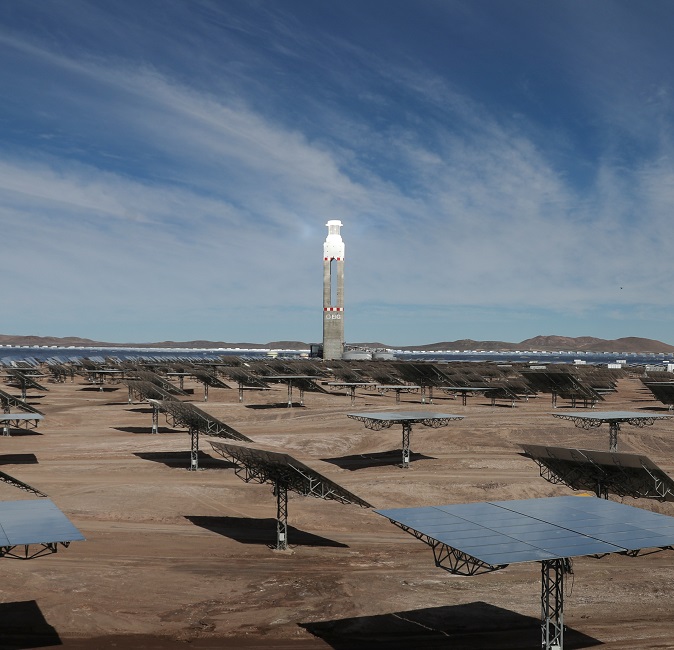 EIG has made huge savings since its Cerro Dominador plant but low PV costs are stunting growth. (Image: REUTERS/Ivan Alverado)

Chile's renewable energy auction last month produced the lowest ever bid price for a Concentrated Solar Power (CSP) plant, offering some hope to an industry where activity has slowed amid the rise of PV.

The bid price was around a quarter of the $114/MW price secured by EIG in 2014 for its nearby 110 MW Cerro Dominador plant - Chile's first and only large-scale CSP plant - and less than half the record $74/MWh price for the Noor Energy 1 CSP- PV project in Dubai. EIG was beaten by PV and wind in the auction but CSP partners remain positive as more favourable auction terms are expected. Chile plans to hold its next auction in the first half of 2022 and is considering adjusting auction terms to support greater plant flexibility. In Europe, Spain will soon hold its first CSP auction for a decade.

"We continue working with these projects… We hope that we can participate in future public biddings,” EIG’s CSP division told Reuters Events. "We expect some adjustments in the regulation to allow for much needed flexible clean power to have an opportunity to compete.”

If approved, these measures could offer support to technologies like CSP that can generate day and night, it said.

Many CSP developers have pivoted from parabolic trough designs to tower plants to optimise storage systems and gain a competitive advantage in overnight power. Combined with PV, these plants can offer highly competitive power 24 hours a day.

The Atacama desert hosts some of the best solar conditions in the world for CSP development and EIG used learnings on Cerro Dominador to improve the design for Likana. The developer also benefited from more competition between engineering procurement construction (EPC) companies, it said.

"More plants have been built since Cerro Dominador started construction and significant experience was gained in design and operation," EIG said.

The all-in construction cost for CSP towers in Chile, including materials and labour, has fallen by 80% in the last two or three years, Cristian Sepulveda, head of the Chilean CSP industry association, said.

Performance learnings on Cerro Dominador helped to reduce redundancy in the design of Likana. The project also included a larger CSP receiver and a different configuration of CSP and PV that includes 12 hours of storage as opposed to 17.5 hours on the earlier plant.

EIG also expects the financing cost for Likana to be lower following the full commissioning of the Cerro Dominador plant earlier this year. Proven reliability of Cerro Dominador would reduce the risk premiums required by investors, it said.

CSP developers face increasing competition in the dispatchable power market. CSP with storage is more competitive than PV with batteries for storage durations longer than around three hours, but this could change as PV and battery costs continue to fall.

Canadian Solar achieved the lowest bid in Chile's auction, securing a price of around $13/MWh for a solar project with batteries, according to reports.

"This piece is still missing in the CSP industry," he said.

Without a sharp pickup in orders, the long-term competitiveness of the CSP industry could be damaged, Richard Thonig, research associate at the Institute for Advanced Sustainability Studies (IASS) Potsdam, told Reuters Events earlier this year. Thonig was part of a team of researchers that studied the impact of industry developments on the competitiveness of CSP compared with PV.

"What is missing now is a short-term pipeline ideally in the GWs of size, to realize the expected cost reductions," Thonig said. "Cost reduction follows deployment and the economies of scales in modern manufacturing in large-scale factories."

"We see something like 200 MW-500 MW per year and no new large market is in sight," Franziska Schoniger, a researcher at TU Wien Energy Economics Group (EEG) and co-author of the study, said.

EIG could achieve economies of scale and series in Chile if it can secure the offtake.

"The Likana site allows us to build three towers with similar capacity. We have increased the expected capacity from 150 MW each to up to 230 MW each," the company said.

Another factor in cost reductions is how quickly third-generation plants can be brought to market.

These plants achieve higher temperatures and higher energy conversion efficiency but widespread commercial deployment is many years away.

Spain's upcoming CSP auction will indicate whether such dramatic cost reductions are also possible in Europe. The government has confirmed it will tender for 200 MW of new capacity by the end of the year.

Spain was a pioneer in CSP and hosts many of the leading global CSP suppliers. The country has 2.3 GW of installed capacity but domestic build was halted in 2013 after the government replaced feed-in tariffs with regulated asset value-based payments to recoup a state deficit.

"Southern Spain has better DNI than Dubai, so also here lower [levelised cost of energy] can be achieved and in the US you have in some places even higher DNI than in Spain," Dinter noted.

Country comparisons are difficult however as auction terms differ.

Prices in Spain will depend on auction parameters that are yet to be published, such as whether hybrid CSP-PV plants will be allowed, the lifetime of the tariff and the exposure to market prices, Martin noted.

"These external parameters set the price of the technology," he said.

As countries ramp up decarbonisation targets, CSP proponents see the technology as an essential way to replace fossil fuel capacity with flexible renewable energy resources. The full decarbonisation of the US power grid could require 39 GW of CSP capacity with thermal energy storage (TES), the US Department of Energy (DOE) said in a report last month.

In solar-rich countries, CSP "will be an important part of our future electricity production," he said.