Hybrid technology designs produced record-low floating solar prices on hydroelectric dams in Portugal, providing learnings to Spain as it opens up its waters. 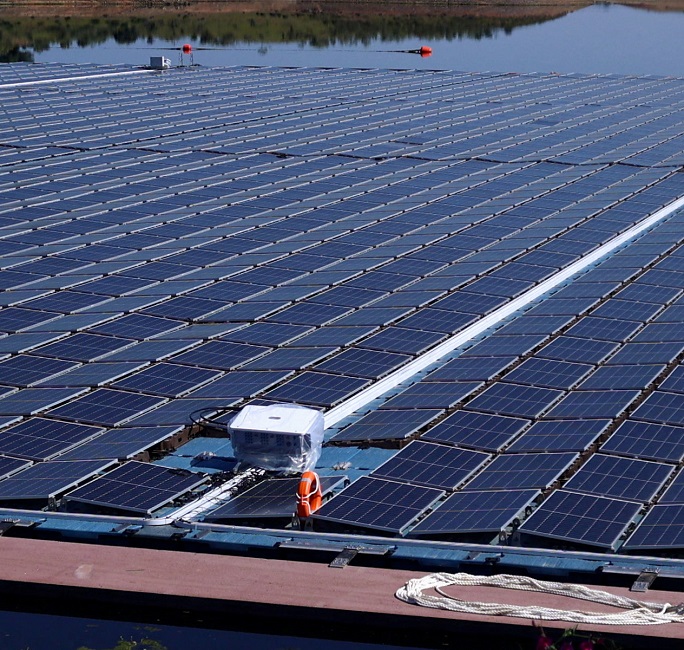 Developers are scaling up floating solar and combining arrays with other technologies to reduce offtake prices. (Image: REUTERS/Pedro Nunes)

EDPR bid a negative price of 4.13 euros/MWh ($4.50/MWh) for 70 MW of floating solar power at its giant Alqueva hydroelectric dam combined with 14 MW of additional solar capacity and 70 MW of wind.

The record-low price was achieved through scale and the combination of technologies, a spokesperson for EDPR, a subsidiary of Portuguese utility EDP, told Reuters Events. Due online in 2025, Alqueva will be Europe's largest floating solar plant and gain market prices from the other solar and wind components to compensate for the negative floating solar price.

The Spanish government is preparing to launch its floating solar market by rolling out new regulation for projects on public water spaces. The first projects are likely to be deployed on hydroelectric dams, allowing developers to gain scaling and operational learnings that could be applied to other water bodies such as water treatment plants and disused mines. Endesa's Alto Rabagao project includes 49 MW of battery storage and 48 MW of wind and will offer a load factor of "over 40%, well above the usual load factor" of solar or wind projects, the spokesperson said.

The contracts allocated in the auction apply for the first 15 years of floating solar production and the energy produced by the other technologies can be sold at the daily market price in the Portuguese MIBEL market. The average day-ahead MIBEL price in 2021 was 112 euros/MWh.

Portugal also simplified the bidding process by granting both grid connection and water surface rights for 30 years, Endesa noted, removing permitting hurdles that are delaying many solar and wind projects across U.S. and Europe.

To reduce the backlog, Spain and Portugal are implementing temporary rules to reduce permitting times for land-based solar and wind projects and European Union leaders have agreed new rules that require members to designate areas for faster approvals.

EDP was an early mover in floating solar, looking to gain from growing solar and wind expertise and its large fleet of hydroelectric capacity.

The company benefits from significant technology learnings, from a test floating solar project completed at Alto Rabagao in 2017 and 5 MW of capacity at Alqueva which is due online in July.

The 5 MW Alqueva project consists of 12,000 solar panels and 2 MWh of battery storage. The project would allow EDP to optimise a "new hybridization model" for PV-hydro plants, Miguel Patena, Director of Innovation and Technology at EDP Production, told Reuters Events in 2020.

Shifting water conditions on large hydroelectric dams bring design challenges and developers like EDP have worked with engineering groups to develop special mooring and anchoring systems that can adapt to changing water depths and temperatures.

Spain has around 100 state owned reservoirs, including hydroelectric dams and non-hydro facilities, and is analysing responses to proposed floating solar regulation following a public consultation in April. Spain installed 3.3 GW of solar capacity in 2021 and aims to build 30 GW of new solar by the end of the decade.

The Spanish government is keen to support floating solar as it provides greater energy efficiency through the cooling effects of water and less dust accumulation than land-based projects, a spokesperson for the energy and environment ministry MITECO, said.

Spain is expected to offer 25-year concessions for floating solar projects and developers will be required to provide grid connection permits in project proposals, favouring hydroelectric dams over water sites without grid capacity.

MITECO plans to implement the new rules as soon as possible but developers are still waiting for a clear auction timetable.

Floating solar is still an emerging technology and therefore “it is necessary to act carefully,” the ministry spokesperson said.