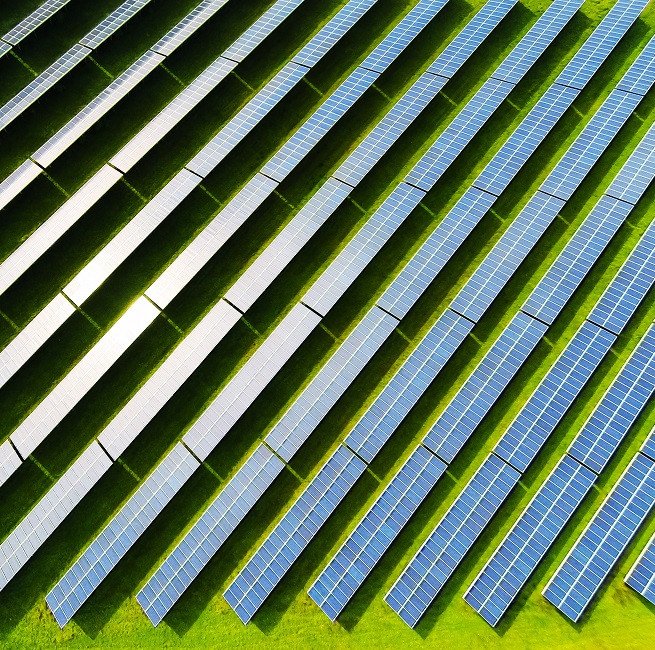 The global weighted average levelized cost of electricity (LCOE) of utility-scale solar PV is forecast to drop by 40% by 2020, to $60/MWh, according to a new report from the International Renewable Energy Agency (IRENA).

Technology innovations that unlock efficiencies in manufacturing and power generation will take on "increasing importance," it noted.

"Record low auction prices for solar PV in 2016 and 2017 in Dubai, Mexico, Peru, Chile, Abu Dhabi and Saudi Arabia have shown that an LCOE of $30/MWh is possible from 2018 and beyond, given the right conditions," IRENA said.

These conditions include strong solar resources, a favourable regulatory framework, low offtake and country risks, a strong local engineering base and supportive tax regimes, it said.

Global corporate funding in the solar sector rose by 41% in 2017 to $12.8 billion, according to the latest data from Mercom Capital.

Higher global installation levels, a reduced threat to the [U.S] solar investment tax credit, and lower than expected tariff recommendation by U.S. International Trade Commission (ITC)supported demand, Mercom said. Strong debt financing activity and over a billion dollars in securitization deals boosted funding, it said. Funding was still at only half the level seen in 2014-2015.

"After several challenging years, most of the solar securities were up in 2017 reflecting overall positive sentiments around the solar industry even as several Chinese manufacturers decided to go private. Of course, all this could change swiftly if President Trump decides to impose higher tariffs in the trade case," Raj Prabhu, CEO and Co-Founder of Mercom Capital Group, said.

Trump must decide on tariffs for imported solar panels by January 26, following a case brought by Suniva and SolarWorld America. The plaintiffs argued low-priced panels from Asia are damaging the U.S. solar manufacturing industry and the ITC has recommended tariffs of up to 35%.

Solar project acquisitions soared from 12.2 GW in 2016 to 20.4 GW in 2017 and the number of corporate M&A transactions rose from 68 to 71, Mercom said. Solar downstream companies were involved in 51 of these deals, it said.

"The largest and the most notable [M&A] transaction in 2017 was the $1.6 billion acquisition of FTP Power (sPower) by AES and Alberta Investment Management (AIMCo) from Fir Tree Partners," it said.

Coal and nuclear power plants have been under pressure from rising renewable energy capacity and sustained low gas prices.

Proposals submitted by Energy Secretary Rick Perry in September required market operators to implement rules to allow the "full recovery of costs" of plants which provide grid reliability services and have a 90-day fuel supply on site, effectively directing the support at coal and nuclear generation.

The FERC has rejected these proposals, saying the Department of Energy (DOE) failed to demonstrate that existing electricity tariffs were "unjust and unreasonable," FERC said in a January 8 filing.

The commission has instead launched a new consultation “to enable us to examine holistically the resilience of the bulk power system,” calling on grid operators to submit specific grid resilience information within 60 days, it said.

"We have seen a variety of economic, environmental, and policy drivers that are changing the way electricity is procured and used...the Commission’s markets, transmission planning rules, and reliability standards should evolve as needed to address the bulk power system’s continued reliability and resilience," FERC said.

US electricity price ranges per market
(Click image to enlarge) 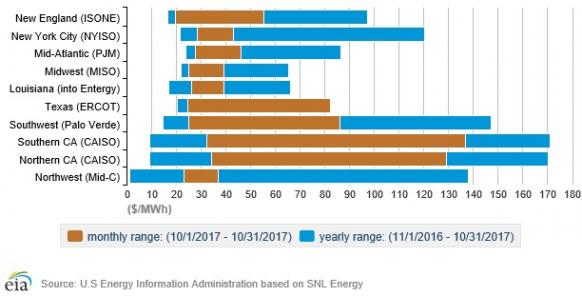 The FERC's new consultation aims to:

(1) Develop a common understanding between the FERC and the electricity industry of what resilience of the bulk power system means and requires.

(3) Use this information to evaluate whether additional FERC action on resilience is required.

Saudi Arabia has shortlisted bids by ACWA Power and a Marubeni-led consortium to develop and build the 300 MW Sakaka PV project.

The Sakaka project represents the first tender round of Saudi Arabia's National Renewable Energy Program (NREP), which sets a target of 9.5 GW of renewable energy capacity by 2023. Around 3.5 GW of new renewable capacity is expected online by 2020.

Eight bids had prequalified for the tender, at prices between 6.7 and 12.6 Halalas/kWh.

"All eight bids that were submitted have been subjected to a detailed evaluation of material compliance to request for proposal (RFP) requirements, including the 30% local content component for Round 1 NREP projects," Saudi Arabia's Renewable Energy Project Development Office (REPDO) said in a statement.

REPDO will select the winning bid this month and the deadline for financial close of the project is the end of February, REPDO said.

The selected project will be backed by a 25-year power purchase agreement (PPA) with the Saudi Power Procurement Company (SPPC). The plant is expected to be brought online in 2019.

Saudi Arabia is restructuring its power sector as part of its Vision 2030 plan to diversify its economy away from hydrocarbon resources. The Middle East kingdom hopes to attract up to $50 billion of investments in solar and wind projects and new development frameworks are boosting investor confidence after years of stunted growth.

Saudi Arabia launched the first round of its NREP in April 2017, inviting bids for the Sakaka project in Al Jouf province and 400 MW of wind power in Tabuk province. Round 2 of the NREP will see a further 620 MW of PV and 400 MW of wind capacity tendered.