Falling costs and rising solar penetration could see the economics of PV plus storage projects overtake stand-alone PV in the coming years as the demand for solar 'peak shifting' and frequency response grows, a new study says. 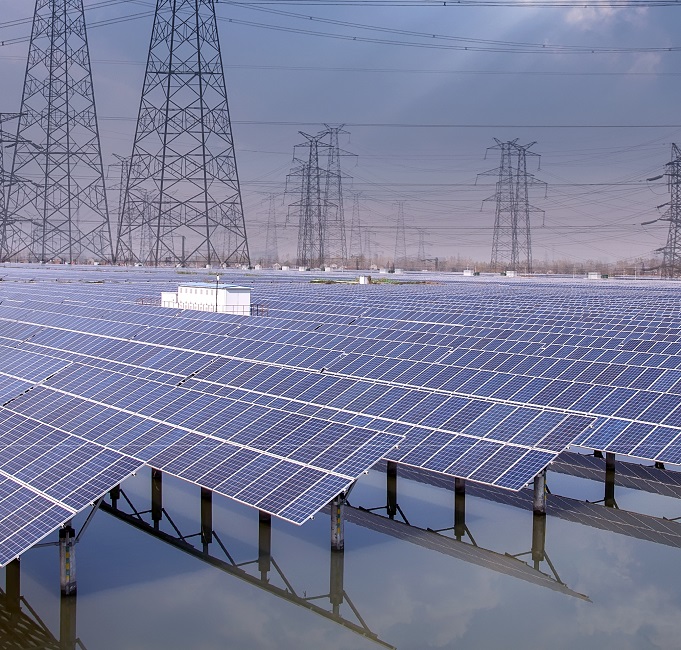 The competitiveness of PV with storage will depend upon the growth of PV penetration as well as technology advancements. (Image credit: Jeff Hu)

By 2020, the business case for coupled PV with energy storage in California could be more favourable than stand-alone PV, according to a new report by the U.S. National Renewable Energy Laboratory (NREL).

California’s installed solar capacity rose from less than 1 GW in 2007 to over 17 GW by the end of 2016, increasing the demand for storage capacity to provide power outside daytime hours.

The coupling of energy storage can impact solar project economics in a number of ways.

Coupling PV and storage can increase the revenue by utilizing otherwise clipped energy, and reduce costs by sharing components. However, it can also decrease revenue by restricting storage operation during periods of high solar output due to shared inverter systems.

Under current market prices, stand-alone PV provides the highest benefit to cost ratio, but by 2020 it could be overtaken by PV coupled with storage as costs fall and PV penetration rises, NREL said in its report.

As the below chart shows, higher penetration levels will significantly favor PV with storage projects over stand-alone plants.

Forecast benefit vs cost of PV with storage 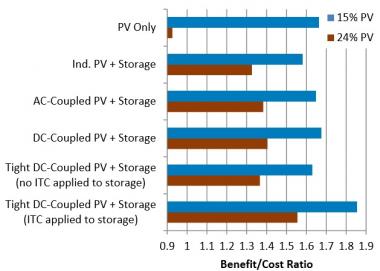 In the short to medium term, storage growth will depend on developers’ ability to transfer specific market requirements into bankable contracts, Leigh Zanone, Director of Plant Performance for US developers 8minutenergy Renewables, told New Energy Update.

“The key is to really get the value there and contract it in a beneficial way,” he said.

For large-scale PV projects, storage capacity can provide a number of potential services.

One key application which is expected to grow in the coming years is the shifting of generation to match demand profiles.

Arizona’s Tucson Electric Power (TEP) is seeking up to 100 MW of storage capacity. In May, the company announced it had agreed to offtake power from a new 100 MW solar array with 30 MW energy storage project being developed by NextEra.

“This new local system combines cost-effective energy production with cutting edge energy storage, helping us provide sustainable, reliable and affordable service to all of our customers for decades to come,” TEP said in a statement.

"Excluding the cost of storage, TEP will buy the system’s output for 20 years for less than three cents per kilowatt hour – less than half as much as it agreed to pay under similar contracts in recent years," the company said.

Developers are increasingly targeting frequency regulation as an application of energy storage coupling.

“Frequency regulation services are useful to the utility in a lot of different locations and generally smaller projects, 5, 10, 20 MW," Zanone said.

Frequency regulation revenues may be "wrapped up in the PPA" or provide an additional income stream for the developer, he said.

"These batteries can boost power output levels more quickly than conventional generating resources to maintain the required balance between energy demand and supply on our grid," TEP said.

“The size of the energy storage and the solar array really depends on where in the stack you want to provide that power,” she said.

Meanwhile, US federal and state authorities are preparing new market rules to improve grid reliability that are expected to further boost the value of PV plus storage.

For example, in August, FERC called for market comment on planned frequency response requirements, seeking feedback on the cost of primary frequency response capabilities for small generating facilities and the role of electric storage resources.

New technologies should be developed to support Bulk Power System (BPS) reliability in the context of rising renewable energy capacity, it said.

The DOE also recommended R&D projects focus on next-generation technologies such as storage technology and advanced power electronics, and sensors and controls, to increase the flexibility of grid operations.

Going forward, the increasing use of locational marginal pricing, where wholesale prices reflect the value of energy at specific points in the network, should further increase the value of PV plus storage.