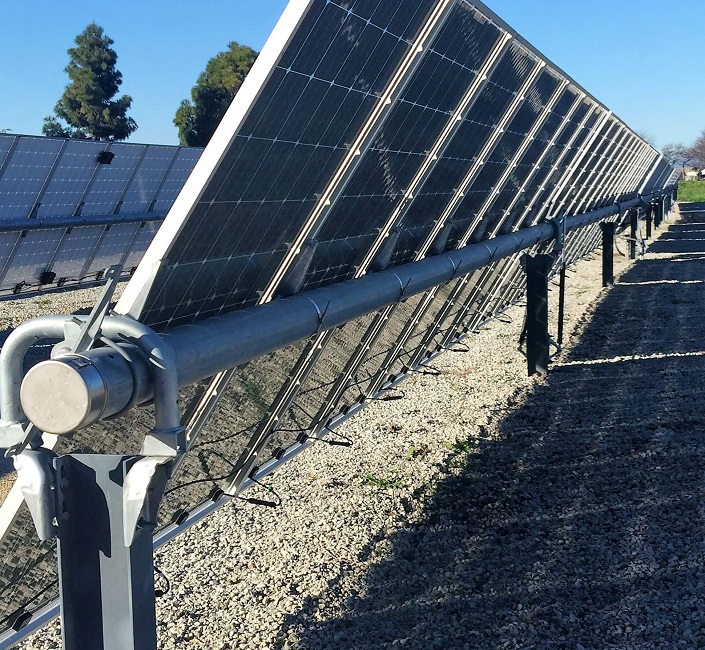 The market for bifacial solar modules looks set to take off this year as developers seek new ways to increase efficiency and fend off aggressive price competition.

Invenergy completed construction financing for Southern Oak in January and the plant is due online this year. Located on reflective desert land, the project will incorporate LONGi bifacial modules and NEXTracker single axis trackers. Power output from the PERC cell system will be 25% higher than a traditional monofacial module with fixed rack PV system, LONGi said.

Modelling of a project site in Georgia with relatively high irradiance levels predicts an IRR for an optimal bifacial plant (PERC cells) at around 9.2%, around 50 basis points (over 5%) higher than for the optimal mono-facial design, Suez told the conference.

U.S. utility-scale solar installations are forecast to rise from 7.8 GW in 2019, to over 10 GW in 2020-2021, Wood Mackenzie and the Solar Energy Industry Association (SEIA) said in their latest quarterly U.S. Solar Market Insight report. 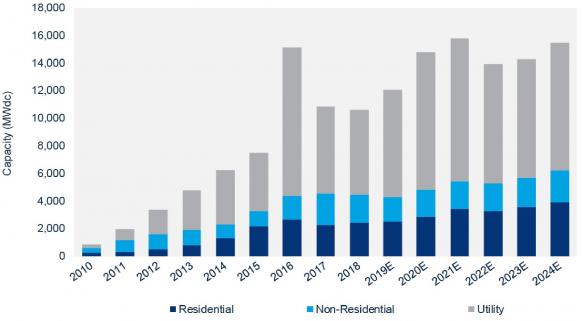 Bifacial systems are forecast to represent 10% of the utility-scale market in 2019, rising to 30% by 2025, according to the National Renewable Energy Laboratory (NREL).

This could mean around 1 GW of bifacial solar projects in 2019 and much higher levels in the coming years.

"That's a remarkable change from literally nothing today," Suez told the conference.

Forecasters may also be underestimating overall solar growth in the coming years.

The U.S. solar industry has consistently beaten price and growth forecasts and data from Wood Mackenzie and SEIA shows there is around 4.4 GW of solar projects under construction, 22.3 GW of signed solar power purchase agreements (PPAs) and a further 38.8 GW of announced pre-contract projects, Suez noted.

"These PPAs are being contracted for [commercial operation dates] that are in the next couple to three years...This is what the U.S. solar market looks like from a contracting standpoint," he said.

Modelling practices will need to evolve to improve the accuracy of performance predictions and monitoring for bifacial designs, Suez told the conference.

Bifacial developers must take into account a greater number of different solar irradiance metrics and these must be characterized and monitored to reduce uncertainty.

Key modelling assumptions include bifaciality factors (the ratio of rear side efficiency versus front side), albedo values for ground reflectiveness, module height and shading considerations.

Diffuse shading from trackers can also significantly impact performance and ground-reflected spectrums are very different from sky spectrums, he said.

"The economics of increasing your albedo fraction from 0.2 to 0.6 could be almost double your performance gain...this effect is pretty dramatic," he said.

Tracker type and height from the ground are also critical factors.

Increasing the tracker height for a single portrait system from 1.5 meters to around 2.5 m could increase annual output by as much as 0.75%, Suez said.

EDPR is building a new pilot bifacial project this year on which it will test factors such as the impact of vegetation height on performance.

Current industry-standard models do not include many of the metrics specific to bifacial plants and may be underestimating performance, Suez noted.

"They will tend to be a little bit more conservative than reality... That's why we have to build test systems," he said.

Bifaciality factors could rise from current levels of around 70% to close to 100% and this could increase energy production by “over 2.5%," he said.