Research in Qatar has shown that dust accumulation lowers solar energy output by 0.5% per day and on average one clean per month may be optimal. 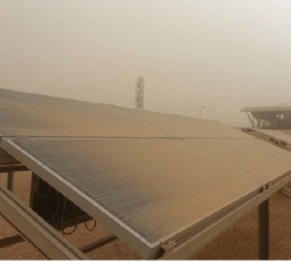 For five years, Qatar has been testing soiling strategies as part of a wider solar research program. (Image credit: QEERI)

Earlier this month, Qatar announced it will launch its first solar tender for 700 MW of capacity by the end of the year. Qatar General Electricity & Water Corporation (KAHRAMAA) has prequalified 16 international solar developers and 350 MW will be connected to the grid by 2020, it said.

Heavily reliant on LNG imports, Qatar is looking to diversify away from fossil fuels.

Soiling and performance tests revealed the impact of dust accumulation in desert environments and potential cleaning strategies to minimize costs.

Dust, sand, heat, humidity and salinity can cause ‘cementing’ on PV modules, a hardened dust layer that reduces conversion efficiency.

QEERI found that dust accumulation on PV modules reduced energy output by 0.49 % per day on average, equating to a 15% drop in production over a month.

“A new panel with layers of dust/cementing will have the same efficiency of the best panels from 30 years ago…The impact of dust is underestimated,” Marc Vermeersch, Executive Director of QEERI, told New Energy Update.

Assuming “mid-range” module efficiency, labor costs and power prices, the optimal strategy was to perform cleaning when the power production losses from soiling reached around 10%, the researchers found.

This translated to between eight and 13 cleaning programs per year depending on economic assumptions, the lower number applying to low electricity prices and high labor costs. 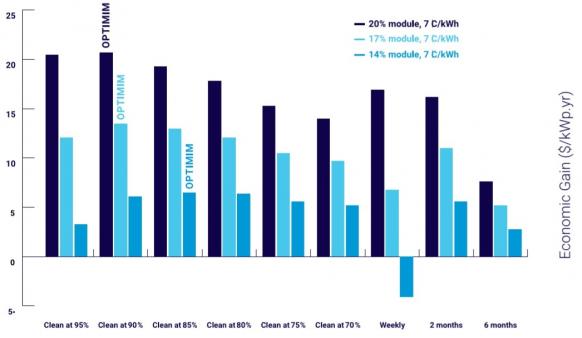 The Qatar findings should be applicable to other key solar regions which are affected by dust and sand, including much of the Middle East and North Africa (MENA), Southwest U.S., Chile, and parts of India and China.

Qatar has similar energy yields to California, taking into account dust and weather factors. Identical multi-Si modules from the same manufacturer’s batch were field tested in three locations for one year. They produced on average 4.8 kWh/day/kWp at the STF, 5.0 in California, and 3.3 in Germany.

California solar power has soared and operators are increasingly seeking savings from operations and maintenance practices. California installed solar capacity was 22.8 GW at the end of June, of which around 10 GW was utility-scale capacity. 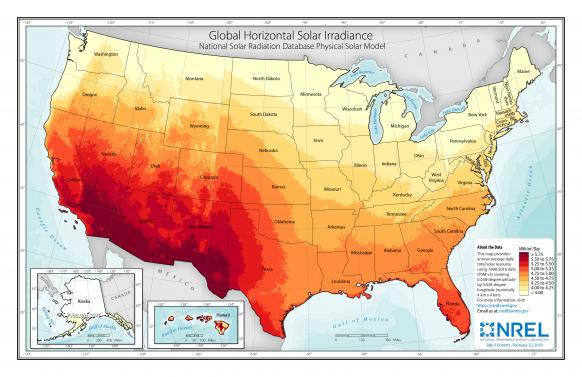 U.S. operators are demanding more sophisticated dust accumulation analysis to inform construction and operations decisions. The use of preconstruction measurement stations, which provide data on the composition and behaviour of soiling particles, has risen significantly.

Solar plants near agricultural or industrial areas are more prone to register higher soiling rates in the U.S., according to specialists.

In its research, QEERI tested 84 anti-soiling coatings and glasses and none of these reduced PV soiling “significantly, consistently and durably,” it said.

Israeli technology developer Ecoppia has developed a water-free robotic cleaning technology that is fixed on each array and is charged by its own in-built PV panels, requiring no human intervention.

In August, Ecoppia announced that it would deploy its cleaning system on the 325MW REWA solar scheme in India. To date, Ecoppia has secured supply to 3 GW of solar plant capacity, it said.

The benefits of robotic cleaning technology will depend on a range of site characteristics, such as infrastructure, power requirements and labor costs, Vermeersch warned.

“We strongly believe that there is no one perfect standard solution," he said.

As it gears up for solar growth, Qatar has created the QEERI Solar Consortium, a membership-based research and learn program. Launched in August, the consortium will research, test and demonstrate solar technology designed for desert climates.

The Institute has started an Advance Soiling Research program which will study the fundamental processes behind dust accumulation, layer formation and the cementing process.