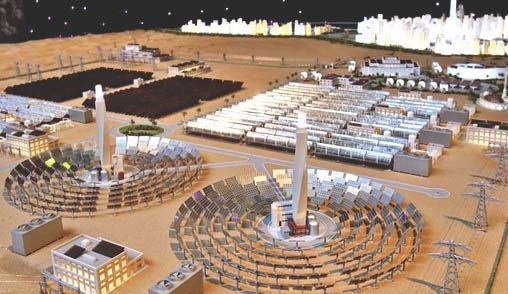 This first phase will be fully funded and implemented by Dubai’s Supreme Council of Energy (SCE) and managed and operated by Dubai Electricity and Water Authority (DEWA), the state-owned sole power supplier.

“Currently in Dubai, 4.5MW of power is generated by solar energy”, says Najeeb Zaafrani, CEO of the SCE. Across the emirate, the utility has an installed capacity of 7,361MW – all run on oil and gas, with peak demand remaining well below 6,000MW. But a small portion of the city’s electricity runs on solar power.

PV was chosen for the solar park’s first phase because it has less interconnectivity requirements than concentrated solar power (CSP) and because DEWA’s existing grid is available in the area, explains Saeed Al Tayer, vice chairman of the SCE and CEO of DEWA. In the long-term however, CSP will be integrated and will produce the lion’s share of total power.

Of the envisaged 1,000MW, 200MW will be generated through PV and 800MW through CSP, Chairman of Dubai Supreme Council of Energy Waleed Salman told CSP Today.

A 48-square kilometre area in Seih Al Dahal, near the Dubai-Al Ain road has been chosen to host the solar park. The site is large enough to accommodate two types of CSP: parabolic troughs and solar power towers.

Although still in its very early stages, the project apparently favours CSP, despite the fall in global PV prices.

“What I understand is that DEWA does not favour any technology in particular. All options remain open”, said an officer at the Dubai Carbon Centre of Excellence, who preferred to remain anonymous. But from the miniature project model currently showcased at DEWA’s headquarters, dozens of parabolic mirror arrays and two powers towers can be seen, in addition to a large group of PV panels.

According to Mr Salman, the CSP portion is likely to be an integrated solar combined cycle (ISCC). He says hybrid makes sense for integrating the two types of CSP technologies. ISCC would be suitable for Dubai given the country’s oil and gas resources. The UAE boasts the world’s seventh and sixth largest oil and gas reserves, respectively.

Dry cooling on the cards

CSP sites typically use large amounts of water for cooling, up to 500 million gallons a year or about 800 gallons per megawatt hour. Using air instead of water for the cooling process can reduce water consumption by a whopping 97%, according to The European Water Platform.

Increasing water scarcity in the region means that dry cooling technology may well feature in the plants. “This is one of the aspects being studied by the consulting firm; however, it is too early to confirm technical specifications until we have reached that stage”, says Mr Salman.

In early March, Austrian firm ILF Consulting Engineers was awarded a consultancy contract for the overall development of the project’s first phase, while Belgium’s Tractebel Engineering, a subsidiary of GDF Suez, is developing the regulations and procedures for connecting the solar plants to Dubai’s power grid.

ILF has been working on a 120MW solar ISCC power plant in Tunisia, where it was selected by STEG Energies Renouvelables to conduct the design study and select the optimum configuration for the combined cycle and CSP plant.

The two European consultancies will together help plan the first part of the project, leading up to the expansion of the solar park. Next June, the tender for developers is set to open, and the later stages of the project will be done in cooperation with Masdar City and will be open to partnerships, particularly from the private sector.

Abu Dhabi aims to generate 7% of its power from renewable sources by 2020, and Dubai is targeting a mere 1% by 2020 and 5% by 2030.  These targets fall well below international renewable energy targets, in particular those of EU member countries, which have set a target of a 20% share of renewable energy by 2020.

Abu Dhabi's and Dubai's renewable energy generating capacity targets are “relatively low from a global perspective and do not present a real problem for integration into the network”, says Bruce Smith, Business Advisor for the Abu Dhabi Water and Electricity Authority (ADWEA).

Yet Smith emphasized that solar power is expected to form the bulk of the proposed capacity of renewable energy in the UAE, where radiation levels are more dependable and predictable during the peak demand period of summer months than European wind and solar power. The picture will certainly be clearer in eighteen years from now, when the entire solar park is complete.