Integrate marketing, sales and IT to create a customer centric multi-channel marketing strategy

Putting a Dent in Neglected Diseases

Steve Jobs once said, “We’re here to put a dent in the universe”. We talk to Flemish researcher, Koen Andries, who has succeeded in putting a considerable dent in the progression of multi-drug resistant TB. Here, he discusses the deadly gap that persists in neglected disease drug development. 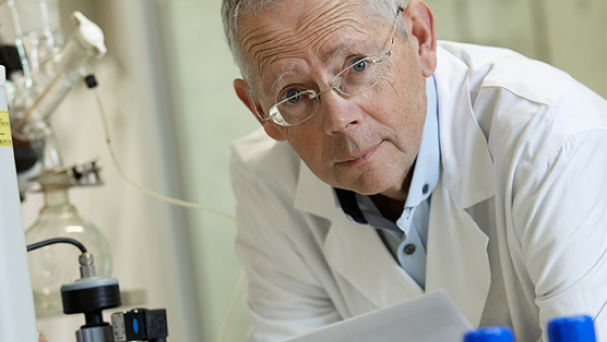 There is a 13-fold greater chance of a drug being brought to market for central-nervous-system disorders or cancer than for a neglected disease1. Despite these considerable odds, Koen Andries, VP Scientific Fellow in Research & Development at Janssen, battled successfully with his team to develop a new antibiotic for the treatment of multi-drug resistant tuberculosis called bedaquiline. Bedaquiline destroys bacteria by shutting down its energy supply, a totally new mechanism of action compared to older antibiotics. Treating drug-resistant TB can take years and can cost 200 times as much as treating the ordinary form of the disease. Meanwhile, bedaquiline’s approval was the first time in 40 years that the FDA had approved a drug that attacked TB in a different way from the current treatments on the market.

In 2012, the World Health Organisation estimates there were 450, 000 new cases of multi-drug resistant TB in the world – and an estimated 170,000 deaths. The FDA recently granted accelerated approval for bedaquiline as part of combination therapy to treat adults with pulmonary multi-drug resistant TB for whom an effective treatment is not otherwise available and bedaquiline has been granted conditional approval in the EU.

The path leading up to this point was paved with obstacles for the discovery and development teams. According to Koen, it was sheer persistence and the ability to convince the heads of R&D to stay the course that secured the eventual success of the project after almost 15 years. “Bedaquiline had already been discovered by my former colleagues (who are now retired) in the mid-nineties and I became responsible for the program in 2001. Efficacy data in mice at that point in time was controversial. We didn’t know the mechanism of action of the compound –and developing a compound without this knowledge is fraught with difficulty. In 2003, we found a way to make better formulations despite its extremely low solubility in water and because of that our in vivo results were spectacularly better. Then, in 2004, we discovered the mechanism of action and that was very exciting as it was the first time that a drug was found to interfere with energy synthesis in bacteria in general, not only in TB, and it was the first drug that attacked the ATP synthase, a crucial enzyme in energy synthesis”.

That data was published in the journal Science and created huge excitement in the TB research and development community.

You really need a strong champion to defend a compound without a return on investment so getting it through that period was an enormous challenge".

However, despite these exciting discoveries, bedaquiline hit a serious bump in the road: “Immediately thereafter, we had a one week proof of principle study in South Africa and this proved positive but barely positive and much less than we had anticipated. The development of the drug came to a complete stop. But after some time, we were able to explain that the weak efficacy seen in patients was probably due to the short duration of the trial. We showed that the results after 4 week's treatment in mice were much stronger than after one week's treatment. So we convinced our management to do another study– we went to 8 weeks and the results of this trial were very dramatically positive. You really need a strong champion to defend a compound without a return on investment so getting it through that period was an enormous challenge”.

The European Patent Office named Drs. Koen Andries and Jérôme Guillemont and their research team the 2014 winner of the prestigious 9th annual European Inventor Award from a group of 15 finalists. The award is obviously a ringing endorsement of a life’s dedication to drug discovery. Commenting on the award, Andries says it was a gratifying moment in his career: “Obviously, it’s your wildest dream coming true as a researcher to have been part of a team that has made this breakthrough. I was very fortunate to be in the right place with the right people around me to accomplish this.”

I’ve seen it [the devastation] in the eyes of patients and it’s very hard. We never realize what happens in developing countries until we actually go out there and witness it ourselves”.

When I questioned Andries on whether he had seen, at first hand, the effect this drug has had on the lives of patients in Africa, he became very emotional: “I’ve seen it [the devastation] in the eyes of patients and it’s very hard. We never realize what happens in developing countries until we actually go out there and witness it ourselves”.

Although conventional drugs are available, many patients stop taking them after initial symptoms of TB subside. But finishing the course of treatment is crucial because drug-resistance and relapses may occur. The new drug reduces treatment time by about 40 days, so patients are much more likely to take it for the full duration of treatment. Bedaquiline is nearly twice as effective as traditional treatment at eradicating TB in patients – and makes the patient non-infectious for others after just eight weeks.

On its own, bedaquiline is not enough. There is still a need for new companion drugs to be used in combination with it to prevent emergence of resistance. “We are hopeful that companion drugs will come on the market in the next few years, so that we can develop a completely new combined treatment regimen. It’s important that the drug is used appropriately to reduce any chance of resistance emerging”, comments Andries.

Bedaquiline (branded as Sirturo) is not expected to be a moneymaker for Johnson & Johnson because the disease is prevalent in poorer countries unable to afford high prices for the treatment. Providing the drug, though, could help the company create goodwill among regulators, governments and patients around the world. "The commercial opportunity is very limited," said Pamela Van Houten, a J&J spokesperson. "This is part of our commitment to advance innovative medicines that help address serious public health issues."

Janssen has entered into a novel collaboration with the Stichting International Dispensary Association (IDA), a procurement agent for the Stop TB Partnership’s Global Drug Facility (GDF) to facilitate access to its anti-tuberculosis medicine and to ensure appropriate use. More than 130 low- and middle-income countries will now be able to buy this new anti-tuberculosis medicine through the procurement processes of Global Drug Facility and its agent, the International Dispensary Association. The newly formed Janssen Global Public Health was the driving force within the company to establish this public-private partnership.

I think it’s very important that it effects reputation, because that in itself is an incentive for companies to work on drug development for neglected diseases”.

According to Andries the effect on Janssen’s reputation has been extremely positive: “I’d always hoped for a big effect on reputation with this drug and the reputation of Johnson & Johnson has gone up dramatically in the last few years, not solely because of bedaquiline, but it certainly helps. And I think it’s very important that it effects reputation, because that in itself is an incentive for companies to work on drug development for neglected diseases”.

In a study published last year in The Lancet Global Health, the Drugs for Neglected Diseases initiative (DNDi) and other researchers report a persistent deficiency in truly new therapeutics for neglected diseases, despite nominal progress and an acceleration in research and development efforts. Only 4% of new drugs and vaccines approved in 2000-2011 were for neglected diseases, and a ‘fatal imbalance’ remains in R&D for many neglected patients. Andries has some firm opinions on what needs to be done to incentivize investment in drug discovery for neglected diseases: "Obviously neglected diseases is a low profit endeavor, so it’s very important to ensure companies are incentivized appropriately. We need to recognize that, once developed, the paradox of drugs effective against lethal and resistant organisms is that you want to preserve them to be used only appropriately: in the right people and at the right time. We need to reward the scientists and their companies for using the drug only under specific circumstances. Current incentives include the FDA voucher system, allowing for a company who has gained approval for a neglected disease drug to put forward a separate drug of their choice for priority review. A Health Impact Fund and/or a transferable market exclusivity would be much better and make a huge difference. What we, in Janssen, also see as essential is tiered pricing. Not everyone likes tiered pricing, but it is the only way to ensure research on neglected diseases remains sustainable in the future".

The incentive imperative was highlighted recently with the latest outbreak of deadly hemorrhagic fever Ebola in West Africa, for which there is no adequate drug response. Andries adds: “As a society it’s our responsibility to tackle this burden of disease for countries that can’t afford to do it themselves. The post-antibiotic era is near and people will start to die again from common bacterial infections due to antibiotic resistance and it’s only when a close relative or a public figure dies from this that people will start to react. With the Ebola outbreak, this illustrates how little progress has been made in the last number of years since the previous outbreak. But in order to develop a drug, it takes 15 years, so we need to be thinking about these matters now and look to the economic incentives behind these diseases to ensure we can respond appropriately to these public health threats”.

Every year, 13.7 million people die from a group of diseases collectively known as ‘poverty-related and neglected diseases.’ These are diseases that are familiar to many: HIV, TB and malaria, but also diseases that are unfamiliar to many include Kala Azar, Buruli Ulcer and River Blindness. These diseases share one common theme: the traditional, commercial model for developing drugs, diagnostics and vaccines has failed to bring through the tools and treatments that are needed to eliminate them as threats to global public health.2

Anti-microbial resistance is a grave and pressing problem, not least due to a critical shortage of new antibiotics as a result of a lack of commercial incentives. The Health Impact Fund (HIF) is a global fund to incentivize pharmaceutical research. The key innovation proposed by the HIF is an improvement on the Advanced Market Commitments (AMC) model which attempted to artificially create a financial market for a public good. The HIF achieves this by offering a financial reward to any product that has a beneficial impact on the health of the population. If realized, it would shift the financial pull from the biggest financial market, to the greatest human need.3 The clock is ticking and given that it takes 15 years to develop these compounds, discussions around vital incentives needs to take place sooner rather than later.

2. Dying for a Cure: Research & Development for Global Health.

3. Dying for a Cure: Research & Development for Global Health.

Integrate marketing, sales and IT to create a customer centric multi-channel marketing strategy