Explaining the cancer drug Nexavar’s potential to key specialists has been made easier by the creation of a new app which has dramatically increased the interaction time Bayer and Onyx sales forces have with their customers. 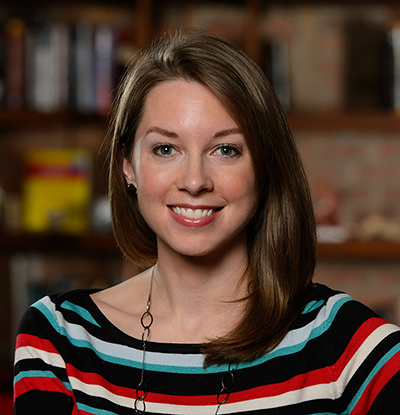 Bayer Healthcare and Onyx Pharmaceuticals teamed up with Radius Digital Science to create an iPad app for Nexavar, the first and only oral systemic therapy for unresectable hepatocellular carcinoma (HCC) patients that has been proven to extend overall survival. It is a first-line systemic treatment following other surgical and loco-regional approaches, so HCPs may try these options multiple times instead of turning to Nexavar at the earliest appropriate time. Brandon Pletsch, President of Radius, explains that, “When Bayer and Onyx first came to us with this challenge, they liked that we had experience working with real anatomy, creating 3D anatomical and surgical models driven directly from data, but aesthetically optimized for storytelling.”

Robert Doig, Director of Marketing at Onyx, emphasized that the challenge for HCC, unlike other cancers, is that treatment decisions aren’t just driven by written data, but visual information – such as tumor size and location within the liver. “Our physicians know the indication for Nexavar but have differing opinions on specific patient types or timing of treatment. Visual images help stimulate a much deeper conversation about who and when a patient is a candidate for treatment,” says Doig. ”Our collective goal was to produce a tool for the sales force that would drive discussions and potentially change behavior, so it had to be engaging on a new level,” explains Pletsch.

“Since doctors, like all of us, are creatures of habit,” says Michelle Peterson, Radius Chief Operating Officer, “they often follow the course of action they know best – and that can be a very good thing. But sometimes, there are nuances in a case that can prove critical to choosing the best course of action.”The app, it was hoped, would illustrate those crucial details. “We’re not a traditional digital agency,” Peterson goes on. “We propose solutions, often unconventional to pharma, and we’re fortunate that our clients are open to them.” 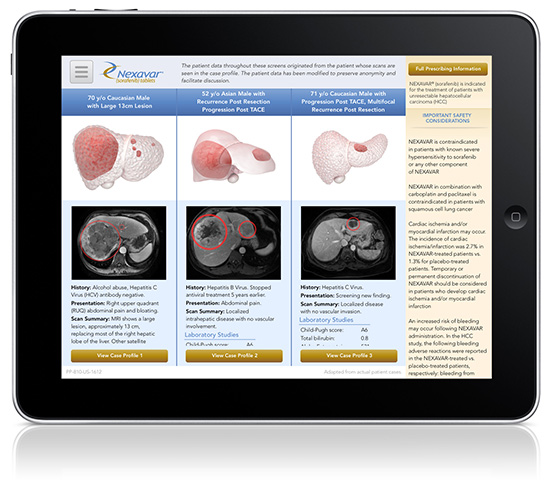 Radius’ expertise lies in presenting complex concepts in an engaging way – for instance, by designing apps that explain diseases or coming up with animations that show how medical therapies work. The idea behind the Nexavar Interactive Case Profile App was to help the sales force engage with HCPs – a mixture of surgeons, oncologists, hepatologists, and interventional radiologists –in order to identify appropriate candidates for the brand and emphasize the importance of starting treatment at the earliest appropriate time. Radius brought to bear its skills in innovative scientific storytelling to work out the best way to do this. Historically, personal promotion apps have been detail aids that were converted to digital PDFs with minimal interactivity. “We looked at ways of bringing static PDFs to life on the iPad, rather than having them in a printed brochure,” says Peterson. “There’s nothing wrong with printed media, but brochures aren’t necessarily the best vehicle for the kind of information we were tasked with conveying.”To be effective, the app needed to incorporate content that was relevant to the HCPs, have an engaging interactive component, and an intuitive interface which reps felt comfortable using with specialists who are extremely pressed for time.

Trisha Haszel Kreibich, Director of Studio Operations and Digital Marketing at Radius, explains, “There were a lot of moving parts to this tool, and proper execution required significant collaboration.”Bayer and Onyx cultivated a relationship with a prominent medical teaching institution which provided anonymized radiology imaging: more than 30 profiles were reviewed for the app and three were selected. These represented different presentations of HCC patients who were appropriate candidates for Nexavar, but who may have been prescribed a different treatment regimen by most HCPs. Interventional radiologists and hepatologists reviewed these profiles to ensure that the anonymized data provided a realistic ‘patient’ and that Nexavar treatment would be appropriate at some time during the treatment journey. The app was beta tested with these experts, who helped shape the way the content was presented, and improved the interface. Radius collaborated with Bayer and Onyx on the concept, developed the app wireframes (blueprints) for initial review, and constructed 3D liver models and lesions from MRI data. An early iteration of the app with just one case profile was field-tested for two weeks with only sales rep leaders: following feedback from the reps and HCPs they met with, further revisions were implemented before the two other cases were developed and the app went through several revisions before it was released to the full sales force.

The non-linear interface of the Interactive Case Profile App means the rep and HCP are able to direct how they would like to evaluate the case profile. All of the laboratory and imaging studies, and other data are accessible in one interface at the touch of a button - the home screen provides an overview so the rep can zero in on a case that is of more interest to the particular HCP they are seeing. Once selected, the HCP and rep can review the case profile information in more detail, as well as manipulate the 3D liver model that was constructed from anonymized MRI imaging studies. The liver can be rotated on multiple planes and the surface can be made transparent in order for the HCP to better visualize the lesions, viewing them from a multitude of perspectives hitherto impossible. As the rep and HCP move through each follow-up within the case profile, they can compare laboratory studies in an expanding comparison chart as well as analyze the disease progression in the MRI studies and liver model. If, in the case profiles, the ‘patient’ is an appropriate candidate for Nexavar treatment, a question appears at the bottom of the screen prompting further discussion. There is also a Main Menu that contains Hepatocellular Carcinoma Guideline resources, relevant journal articles, and full prescribing and safety information for the rep to refer to during the discussion.

The face time and interaction between the rep and the HCP multiplied ten-fold".

So much for the technology – did it actually work? The answer is an emphatic ‘yes’, with the app’s effect particularly impressive in terms of increased access to hard-to-see people: by creating cases developed from anonymized MRI imaging studies and data the sales force reported that the app boosted the time they were able to interact with HCPs from 3-5 minutes to 20-30 minutes, prompting discussion on appropriate Nexavar patient and individual providers protocol.“The face time and interaction between the rep and the HCP multiplied ten-fold,” says Peterson. “Certain HCP clients are ‘hard to see’ or ‘no see’, and radiologists and oncologists can fall into this category. Beforehand, if you got 3-5 minutes of face time with them you had done well.” With the app they can now have a more productive dialogue, explains Haszel Kreibich. “This is something that could revolutionize how reps speak with doctors,” stated one of the lead reps from the field force. “An app like this might also revolutionize the way doctors interact with patients.” Reps even went so far as to say that HCPs wanted to take the iPad from them and use the app themselves. On a 10-point scale (1 being ‘not effective’ and 10 being ‘excellent’), the sales force gave the app 9.5 and higher for: provider interest level, effectiveness in bridging to selling message, yielding additional selling time and being an effective sales tool.

“The more innovative digital assets we can produce for the iPad, the more doctors will engage with it,” Peterson adds. Although the Nexavar app is currently only available on the sales force’s iPads, Radius suggests things may not stay that way for long. “We always want to make sure that an asset we develop for our clients has a life beyond the current project,” says Haszel Kreibich. So when Bayer and Onyx wanted to reach HCPs at the national liver disease and interventional oncology conventions, Radius worked with them to repurpose the app for use on the 55” touchscreens within the brand’s exhibit booth. There are also thoughts to repurpose the app for use on smartphones and as a web-app for HCPs researching treatment options for their patients online. David Zied, with the Oncology Marketing team of Bayer HealthCare, has always been one to push the envelope. Next, he wants to use the app in ad board presentations and product theatres instead of the traditional PowerPoint for a more engaging and interactive experience with the audience. The current case profiles can be efficiently replaced with new ones to extend the longevity of the app when appropriate. There is even the possibility that it could form the basis for future diagnostic tools. “The HCPs we spoke with confirmed they are open to using this type of app in their practice,” Haszel Kreibich adds. The possibilities of the app appear almost limitless – and this recognition from the judges of eyeforpharma’s Philadelphia Awards suggests that the same might well be true of Radius.

The winners of the Most Valuable HCP or Healthcare Initiative will be announced on Tuesday, April 7th, 2015. For more information on the eyeforpharma Philadelphia Awards, click here.