Where health leaders build the future of health. Total Health unites CEOs, innovators, disruptors and policy makers to set the roadmap for a system of full access and health equity.

Up close and personal – The Dr. Kevin Williams story

Following in his physician father's footsteps, for this pharma leader it's always been about the patient


From a young age, Dr. Kevin Williams looked to his father as a role model. Back in 1952, his father became the third African American physician in Baton Rouge, Louisiana, despite barriers and discrimination faced by Black professionals in the medical field.
“It was a different time,” says Kevin. “When my father first opened his practice, none of the hospitals would give him admitting privileges.”
At his office, Kevin’s father saw patients on a first come, first served basis. Patients in the area were so eager to see him that they started lining up at 4 o’clock each morning, even creating their own sign-up list. By the time he arrived at the office at 8am, there would already be 70 to 80 patients waiting.
Everything Kevin’s father did was focused on his patients. He was selfless and dedicated to the people he served—right down to the smallest details. For example, when Kevin asked him why he didn’t redecorate his office (he had folding metal chairs in the waiting room), he said he wanted to make the space more comfortable for patients who came from the poor black neighborhoods in the city. He knew they wouldn’t feel at ease a fancy office.
By the early 1960s, his father was finally able to admit patients to the hospital. From that point on, he spent his mornings seeing patients at his office, then left to conduct hospital rounds in the afternoon. Kevin remembers that his father would come home briefly for dinner after spending all day at work, and then head back to the office for three more hours. The next day, he would rinse and repeat.
Medical dreams
At eight years old, Kevin started going on house calls and hospital rounds with his dad. At 14, he started covering for his father’s receptionist and nurse during her summer vacations. Through those experiences, Kevin got to see first-hand how his father treated people and put his patients first.
Kevin always knew he would become a physician too. By the time he graduated high school, his older sister was finishing medical school and his father was talking about Kevin taking over his practice one day.
But deep down, Kevin also knew he couldn’t stay in Louisiana. He was gay, and at that time, Baton Rouge wasn’t a safe place to come out. Still, he stayed in Louisiana for his undergraduate degree—but he stayed in the closet as a result.
As an English major in college, Kevin briefly considered leaving his medical dreams behind and becoming an English professor instead. 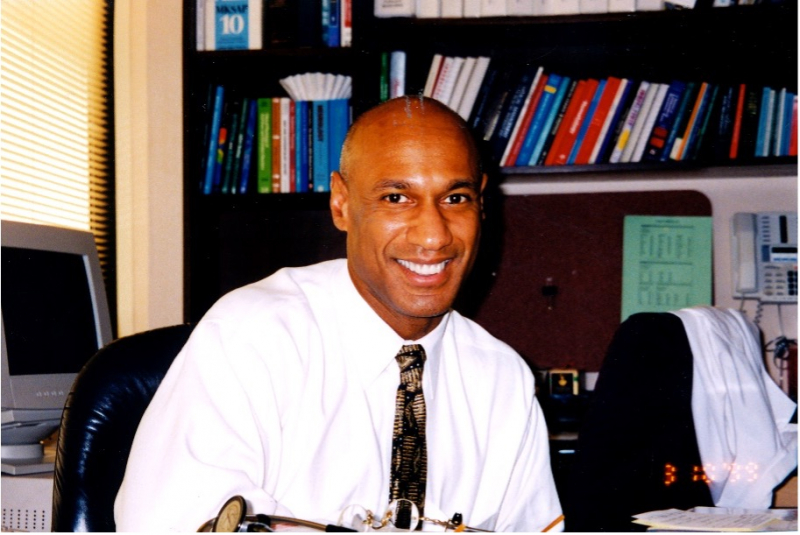 “Reflecting back now, I get it,” he says. “Literature is littered with physicians who are writers. Taking care of patients is as much about understanding the human condition as it is about understanding science and disease.”
Still, medicine still felt like the right path for him. After completing his degree, Kevin moved to California for medical school, and in Los Angeles, he finally had the chance explore his identity as a gay man without fear or judgement.
However, once he completed medical school and an internal medicine residency, he wasn’t sure what to do next. He knew he wanted to help patients like his father, but he also wanted to pursue something that fed his intellectual curiosity.
“My M.O., when I don’t know what I want to do, is to go back to school,” says Kevin.
Patient facing
That’s what led him to enter a fellowship in health services research and pursue a master’s degree in public health. His research focused on access to care for HIV positive patients and during the same period he also moonlighted for an HIV physician conducting hands-on patient care.
It was in that patient-facing role that Kevin discovered what he had been looking for: meaningful work that would make a difference. There was a tremendous sense of urgency in the work. People were dying. Taking care of them required more than understanding the science; it required an intimate connection to the patients.
He was treating people who were critically ill in their 20’s and 30’s—a time when no one should have to wrestle with the prospect of death. With limited medical 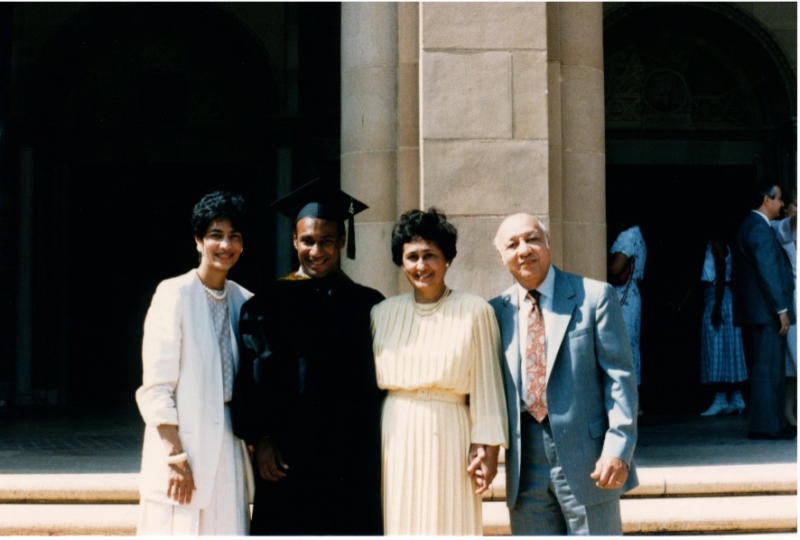 solutions available at the time, Kevin’s role was to help people cope with their illness, and in many cases, it was his job to help the patients transition from fighting their disease to accepting the inevitable.
Kevin had tremendous passion and energy for this work, and he continued it for eight years.
Then, thankfully, medicine advanced – with the help of innovations from the pharmaceutical industry. Kevin went from losing fifty patients in one year to just one the following year. It was extraordinary. But because patients were doing better, his practice changed, moving more towards general internal medicine. The work no longer held Kevin’s interest, so he knew he needed to make a change.
Feeling unsure about the future once again, he fell back into his M.O. —going back to school. This time, he moved from LA to Boston to attend Harvard Law School, with the goal of getting involved in healthcare policy. Unfortunately, law never quite felt like the right fit. He completed law school, but after graduation, he felt no more certain about his future. He missed the sense of purpose and impact that he felt working in HIV, but returning to private practice felt like a step backward. Kevin was searching for a way to making an even greater difference in the lives of patients—especially those suffering from HIV.
At this crossroads in Kevin’s career, an opportunity serendipitously arrived at his doorstep. It was a field-based medical role in HIV at Pfizer. “I was skeptical at first,” says Kevin. “I was taught the pharmaceutical industry was the dark side.”
But law school had also opened his eyes to the power of the corporate world, and the potential for businesses to make a difference in the lives of people on a massive scale. He decided that he would give pharma a try.
A sense of purpose
It wasn’t long before Kevin understood the importance of the work and the value that Pfizer was bringing to people in need. It brought him tremendous joy to see the impact that they were making for patients and he dove into his role headfirst, once again driven by the sense of purpose that he felt helping people with HIV.
Then, Pfizer and GSK created ViiV in North Carolina, and he had a tough decision to make. Would he move south to continue working in HIV—where his passion had always been—or would he choose to bring his passion to a new area?
Ultimately, Kevin decided that it didn’t matter what area he was working within as long as they were doing what was best for patients. He chose to stay in New York and move into other specialty care areas: hemophilia, growth disorders, and other rare diseases.
Over the next few years, Kevin brought his passion for impact to new roles and projects. He is especially proud of his work on Project Alchemy, a program to develop the skills and capabilities of his people in medical affairs. Patients—their voice, their engagement, their choices—remained central to the project under his leadership.
Now, more than 17 years after his first foray into pharma, Kevin is excited to be stepping into the role of Chief Medical Officer in Internal Medicine at Pfizer. He oversees a team of approximately 700 medical colleagues across the globe who are responsible for advocating for better patient outcomes by providing medical leadership for Pfizer’s portfolio of primary care medicines and transforming patient and HCP insights into action.
As Kevin sees it, their role is to understand the perspectives of patients and physicians, identifying unmet needs and bringing that information into the organization. The key is to create two-way communication between people living with diseases and people working to discover and share the breakthrough science that will help them.
In this new role, Kevin’s goal remains the same—to bring a patient-first mentality to every conversation and decision.
“I make sure that I am always the voice asking the question, ‘Is what we’re doing best for patients?” says Kevin. “One of the challenges that happens in our industry is that while colleagues want to be patient focused, it just might not be as top of mind as it should be. My job is to make sure we’re always putting patients first.” 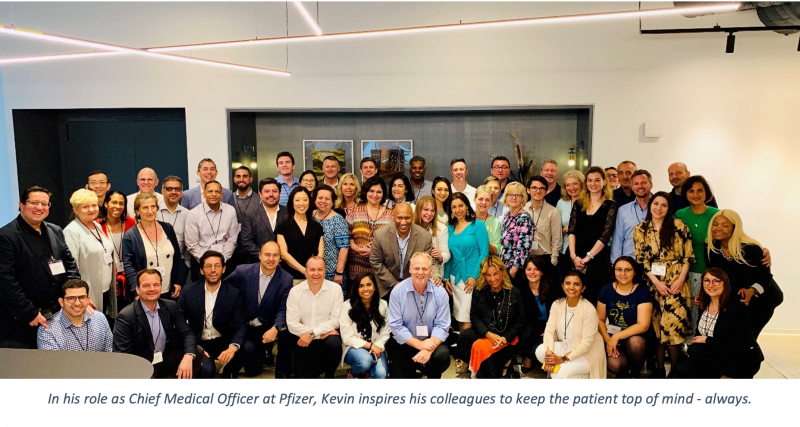 Where health leaders build the future of health. Total Health unites CEOs, innovators, disruptors and policy makers to set the roadmap for a system of full access and health equity.