Building Trust through Collaboration: An Interview with Jane Griffiths 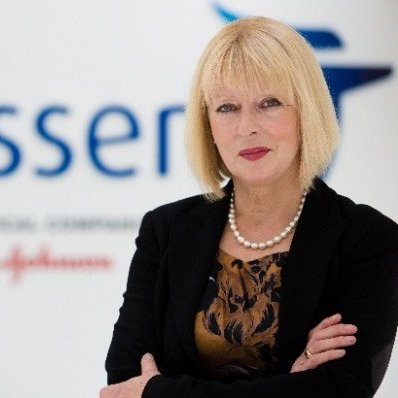 An edited transcript of the interview follows.

Paul Simms: You spoke earlier [during your presentation at the Barcelona Conference] about trust. How do we, as an industry, turn around a situation that has existed for a long time now and doesn’t seem to be getting better? How do we actually change the public perception of pharma?

Jane Griffiths: This morning, I spoke about that and last year and this year, I’ve held a couple of closed round table talks on the topic of trust, where I invited key stakeholders from the healthcare environment to talk about this topic and the subject of transparency came up as quite a big issue. Were we transparent enough around clinical trial data and results and the payments that were going to doctors for various services that we employ them for – were they excessive?

The steps that the industry has taken in the last twelve months, particularly in terms of transparency on clinical trial data – J&J made its own statement last month on how we were going to be transparent regarding trial data and many other companies in the industry are doing the same. Also EFPIA, with regard to transparency of payments to doctors has transposed into its code that all members of EFPIA will be transparent by 2015. So, slowly we peel back the layers to reveal a more trusted industry.

After J&J made the announcement [on making the trial data transparent through the Yale platform], we had a lot of very positive feedback from key stakeholders that this was the right way to go and it’s only when you do something like that, that you see the response from the stakeholders and start to understand what it’s going to take to build that trust. And with the projects that we do with stakeholders, slowly we build trust by demonstrating that we can collaborate and that we can be trusted.

Paul Simms: Do you think that will reach the wider public anytime soon, will that message filter through to the average person on the street?

Jane Griffiths: That will take time I believe – you’re absolutely right because when you look at various audits on trust – The Edelman Trust barometer, for example, it will look at various groups of stakeholders, like the general public, like HCPs and there will be differences in the levels of trust. So, we have a job to do as an industry to make sure that people do understand the steps that we are taking. It’s to some extent within our control about how we make public what we do and how it’s to the benefit of everybody. And we need to work with the press on that, I think that they can be helpful to us in talking about the good that the industry does – all too often it’s the negative press that’s publicised.

Paul Simms: It’s very easy for the media to pick up on the bad headline. My issue is, pharma often tries to counteract that with a good headline but it’s not as much of a story. What can we do to create something that’s going to travel a little bit more?

Jane Griffiths: Well, we talked this morning about patients being at the centre of what we do and, of course, before a patient is prescribed a product, we don’t generally interact with patients as such – it’s not appropriate to do that. But they can be advocates once they’ve benefited from our medicines – we should look to see how that can be spread amongst communities. It’s interesting, in fact, that you saw [from my presentation] the benefit, the increased longevity that society has, due in part, to pharma intervention, particularly in the last 10 years. As a company, we have letters from patients saying how they’ve benefited from the medicines they’ve had – but, it’s a good question that you ask – how can that be disseminated more broadly, because the bad headlines seem to trump the good headlines.

I’m not so much interested in getting into the headlines, but I am interested in a broader group of the population understanding the good that we do. Maybe that’s by what we do rather than what we say. It’s easy to say great things – it’s harder but much better to do great things and some of the projects that many companies are engaging in now with services around the medicines to help patients get the most out of the medicines – they’re really beneficial projects, and the more we do, the greater the trust we can build and hopefully that will spread out into the broader community.

Paul Simms: You know and I know that once you meet people in the industry, you realise that they’re not monsters at all [as portrayed by the media] and they’re actually driven in many cases by wanting to make a difference in peoples’ lives – not greed – and that’s what makes them come into work each morning. Pharma companies, I feel, as a member of the public, are not really seen in that human way. We’re lucky because we see them up close. Why has this industry not got, not necessarily celebrities, but more heroes, people we can identify as personalities that have invented a medicine, or identified a cure. Why can’t the company put a personality around that more?

Jane Griffiths: It’s a good question. I think that happens in some cases. I can think of an example in our company, where we had a particular individual who has spent a lot of his working life bringing about a multi-drug-resistant TB medication to help treat patients and that is coming through the regulatory process at the moment in Janssen and that’s an example of someone who has dedicated their life to something they felt incredibly strong about. This has been a difficult development program but nonetheless he stuck with it and his name is Koen Andries. He’s fully attached to that medicine and within the research and medical community, he is well-known; but do the broader public know him, I guess not. But it’s people like him that work tirelessly [your whole working life dedicated] to bring these medicines to life.

Paul Simms: It is special and it’s a good story. Do you not feel that maybe a company like yours could do more to put stories like that into peoples’ consciousness?

Jane Griffiths: I think it would humanize something a bit more but really I’m interested in the patient being the judge of the medicine. Hopefully, and I’m being the eternal optimist here, patients will spread the good word about the good science and about what that’s brought to them as a person, but it’s not generally something that we try to drive. I think it’s a bit disingenuous to try and do that; I’d rather we deliver a great medicine, it does great things for patients, and as a result of that, it’s a win for everybody. You can’t mend a reputation overnight; we have to put those building blocks in place. The first thing is fantastic, innovative medicines in areas of high unmet need, that are well differentiated – that’s our bread and butter.

Paul Simms: When we talk about patients, there’s still too much lip-service going on, and while we talk a lot, many companies still fundamentally have the same business model. Now, you can’t turn things round overnight but does the industry have enough of a burning platform to make some of the changes it needs to make?

Jane Griffiths: To become patient-centric is a prerequisite for success in the future; because if you’re not, you don’t really understand the outcomes that patients are looking for and then there’s a mismatch between what you’re delivering and what patients want. But there is the extra dynamic with what we bring and that is, what the payers want. So, there are three big constituencies we need to satisfy so that’s the HCP’s, the payers and the patient and come of their needs may be slightly different and we have to satisfy all of those needs. But it starts with the patient; what are the world’s unmet needs, how can we best address those needs and ensure that patients get the most out of the technologies that we bring.

Paul Simms: Pharma has been product-centric in the past, and they’re now moving to be more customer- and patient-centric, which is obviously great news. Can you imagine a situation in the future where companies are so customer-centric that they become almost brand-agnostic? Their job is, for example, to be the leading brand in diabetic care [as opposed to the products that they have] and they’re willing to recommend other treatments that may not be made by their company should the patient actually need them.

Jane Griffiths: To be completely brand-agnostic, in some instances, yes. If you’re bringing a service offering to a particular patient group that isn’t attached to a particular medicine then yes. For more commercial companies that would also require a business model that, should you bring value to the patient, let’s say by education, and by doing that you take costs out of the system, so maybe there’s a model there. I think there is room for both – a product agnostic part, but for the most part, the bread and butter that pharma has is to bring medicines – and the first step is to ensure that they’re used to the very best extent, then add on something else that takes it a step forward.

Paul Simms: You seem to be saying that there is a business model there, where there service could potentially become part of the P&L but you still have huge capacity now from generating effectiveness from the core medicine itself?

Jane Griffiths: The vast majority of R&D spend goes into the new science around the pharmaceutical intervention and making that work is the core of our business. But there can be something else that brings the care of that patient group to an even higher level.

Paul Simms: Do you see that the R&D spend at the moment will shift to R&D in the service model?

Jane Griffiths: I wouldn’t say that there will be a fundamental switch from one to the other. I think the mainstay will be with the pharmaceutical intervention, but as I said, making sure that this happens effectively and understanding that medicine is only part of how a patient is treated. There are a lot of other things that happen around them that make the difference between having an effective medication and not, so we need to address that as well.

Paul Simms: So, what gives you optimism for the future? Is there a specific opportunity that a company like yours should be aiming for?

Jane Griffiths: I’ve worked in this industry for over 30 years and when I see the amazing things that it does through its innovations, I have hope that that will continue in the future. It’s what differentiates the human race from other animals – the innovation and the desire to improve going forward and I mentioned this morning in my presentation that despite the huge strides the industry has made, there is still a huge unmet need in society to address some of the biggest scourges of mankind. Alzheimer’s is a big challenge for society and for the industry and I very much hope that we can bring something to patients in this area. But focusing on the immediate future, some great innovations are coming through. If I look at our own pipeline, I’m very excited and in the last couple of years we also introduced some great medicine and J&J have shown some very good pharmaceutical success as a result of that.