By and large the pharmaceutical industry has escaped price controls in the US -- especially when compared to other markets around the world. Is this situation tenable, and if not, what will the implications be for the industry? 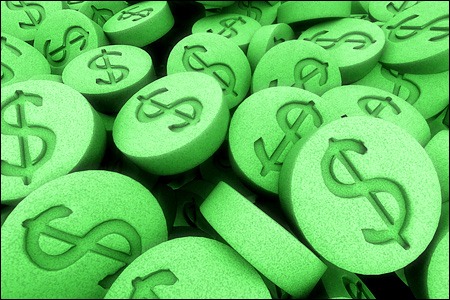 Since 2003, Congress has prohibited Medicare from negotiating drug prices directly with pharmaceutical manufacturers.[1] Even though Barack Obama promised to "allow Medicare to negotiate for cheaper drug prices" throughout his presidential campaign, this element was not included in his healthcare reform legislation, probably because it would massively complicate passage of legislation that was already on thin ice.[2]In reality, private insurance companies do negotiate prices on behalf of their Medicare beneficiaries, but many economists estimate that further savings could be realized if the government could use its purchasing power to negotiate directly.[3],[4]Several attempts to repeal the ban have stalled in Congress. Clearly allowing the largest purchaser of drugs in the country to negotiate -- and presumably reduce -- prices would have severe revenue implications for the industry.

Even without legislative action, the current pharma business model is still under threat from changes in the business landscape and customer expectations. Global economic turmoil, combined with healthcare reform in the US, has created an environment wherein pharmaceutical payers -- private and governmental -- have adopted an increased focus on value, seeking to reduce cost and improve outcomes.  As customers try to manage cost, they will in turn put pressure on pharma companies to justify their products.  No longer are incremental improvements in efficacy or safety rewarded with large price premiums.  Unless they can demonstrate their value, drugs will be treated like a commodity and compared to generics.  Even if manufacturers can provide evidence of differentiated value, payers are unwilling -- and often unable to afford the high prices of the past.  Payers are using all sorts of methods to control costs including reference pricing.  Public sentiment supports efforts to manage costs, and drug prices are often seen as too expensive and an easy target. Even though they only account for about 10 percent of the total healthcare spend, rising drug prices are often perceived to be the cause of healthcare inflation.

Even if the government programs are forbidden from negotiating directly with manufacturers regarding prices, private payers will.  Pharmacy Benefit Managers (PBMs) have started to flex their muscles to contain cost.  Express Scripts removed over forty products from its 2014 formulary as they believed there were more cost effective alternatives available. “We will identify which drugs can be pitted against each other and make some really tough formulary decisions,” the company’s Chief Medical Officer Steven Miller said in a December interview. Jeff Park, Catamaran’s chief financial officer, said some prescription plans managed by his company are already pushing patients to try older therapies first, moving to the more expensive ones only if they fail.[5]

Some payers are even questioning the value of paying a premium for greater convenience -- whether combination pills or less frequent dosing.  This has historically been a relatively straightforward argument for pharmaceutical manufacturers to make: convenience leads to greater adherence, thus avoiding poor outcomes for the patient as well as increased costs to the healthcare system due to complications down the road. However, the magnitude of the price premium for such dosing regimens is being challenged as alternative means for increasing adherence are sought and become increasingly available. Effectiveness being equal, if a company believes convenient dosing will be enough to win favorable reimbursement, "they may end up being disappointed," according to Express Scripts CMO Steven Miller.[6]

Drug companies must focus on the value they deliver as a way of explaining the prices of their products.  All too often, manufacturers have cited the high cost of discovery, development and manufacturing the product, or the level of scientific innovation they represent -- rather than the value they deliver to patients and providers -- as the justification for their pricing decisions.[7]

Even if pharma companies can make a compelling argument that their products add tremendous economic and clinical value to patients and the healthcare system overall, the price discrepancy between the US and other markets is unsustainable.  Pharmaceutical companies have charged significantly more for branded drugs in the US than in countries with price controls.[8]  Increased globalization at a time of cost sensitivity means that patients, physicians and payers are aware of this imbalance and not only resent subsidizing the rest of the world, but will try to reduce the gap.  Pharma companies will be hard pressed to justify the higher price charged in the US.

Except in a few rare cases where the drug addresses an unmet need that is so great, payers will demand lower prices based on the fact that they can see how much the drugs cost overseas.  In most cases, drug companies will be unable to say “take it or leave it”, especially when acceptable alternativesare already available. Government programs will then use these lower prices in the US as a reference to secure a lower price without negotiations.  As a result, within 18-36 months the gap between US and prices elsewhere will be largely eliminated -- with a huge impact on revenue.

If this dire consequence does eventuate, what can the industry do? This could challenge the entire business model. Clearly, companies will need to continue reducing their cost structure. Further, I suggest pharma will need to reconsider its approach to managing portfolios on a global basis. The sequence in which products are launched, and the decision to enter certain markets at all, will have a direct impact on the revenue stream.  Reference pricing will make low-price countries even less attractive because of their potential to influence the price in other markets.  Likewise, products for which the company cannot provide evidence in support of a strong value proposition may also be culled from the portfolio. The commercial model will need to be reevaluated to meet the needs of increasingly sophisticated and demanding stakeholders.

While there may not be de jure price controls in the US, private payers -- PBMs in particular -- are introducing de facto price controls. The impact of which will be to greatly reduce (it probably won’t eliminate entirely) the price differential between drugs in the US and other markets.  While this alignment of process will take some time, pharmaceutical companies should prepare by re-examining their business model, cost structure -- especially in R&D and Commercial -- and their global portfolio.

[8] 40% higher is the figure commonly used, although some studies have found drug prices as much as 195% higher in the US – Kavanos, P., Ferrario A., Vandoros, S. and Anderson G.  Higher US branded Drug prices And Spending Compared to Other Countries May Stem Partly from Quick Uptake of New Drugs.Health Affairs. April 2013 vol. 32 no. 4, 753-761.