Instagram has once again proven to be a superb platform for video with 40% of the video content on the social network being created by brands according to Unruly. Tracking 1,000-shared videos the company discovered MTV was the top brand with 84 videos in the top 1,000. In addition, SimplyMeasured also found after the announcement that Instagram would be offering video quickly moved this content to the top of Vine. 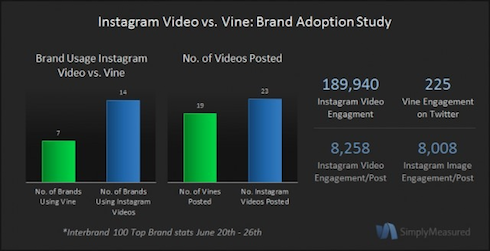 Rachel Tipograph, Director of Global Digital and Social Media at Gap, told Mashable: “The fact that Instagram videos are going to publish to Facebook in the same way a photo does means we are going to see huge engagement. I'm really excited about that."

Also, according to Nielsen’s global survey of over 29,000 consumers, humour tops the charts when effective message communication is considered. Nearly half (47%) of those surveyed stated humourous messages resonated the most with them. So, if your corporation want’s to make the most of video content across the social networks, make them funny.

A recent edition of the Journal of Marketing Management, advises that employers need to move their emphasis away from employees being a risk to corporate reputation when they use social media, to an asset that should be nurtured.

The research paper states: “Research on both corporate branding and reputation has recognised the importance of addressing the ways in which employees and organisational culture play out in effectuating images of the company – both internally and externally. Employees reflect their own experience of the organisation to outsiders when working in different roles in the interface of the internal and external realities of the organisation, and they build reputation by delivering the brand promise to customers.”

The key findings of the study include:

One of the paper’s co-authors Joonas Rokka told New Media Knowledge: “We observe an increasing and consistent need to address the heightened role of employees in social media, regardless of whether the company has an official presence there.

“This need emerges from the fact that employees have a crucial role as active meaning makers and reputation builders in various social-media networks that include customers, colleagues, and friends, and in which the boundaries between work and non-work roles begin to lose their sharp contours. Hence, the ways in which companies balance between managing work and the private lives of their employees, as well as openness and control, becomes an issue that needs careful attention.”

Privacy and freedom seem to be the major components of a shift away from Facebook within the teen sector according to research from Pew and the Amercian Life Project.  Teens don’t want to have too many constraints on how they use their social networks according to the report, making Twitter highly attractive to them. Facebook has been embroiled in many privacy and security issues of late, putting many teen users off the network.

Also the Piper Jaffray & Co. "Taking Stock With Teens" report also states: “Teens have cited "friends" as the strongest influence over their purchase decisions for the duration of our survey history, but "Internet" is quickly rising in profile. More than half of teens indicate that social media impacts their purchases with Twitter being the most important, eclipsing Facebook, followed closely by Instagram. But the popularity of Facebook is waning among teens with 23% citing it as the most important, down from 33% six months ago and 42% a year ago.”

For brand owners the shift is significant, as this will influence how marketing campaigns are designed in the future. No one is saying that brands with a teen audience should abandon Facebook, but the subtle move to Twitter and Instagram is significant and shouldn’t be ignored.

For all brand owners looking to differentiate their ad spend, the first annual Social Media Intelligence report from Adobe will make for interesting reading. According to this research brands are getting much better at engaging with their key audiences. Likes produce 87% of all social engagement. Comments and shares are outpacing likes year-over-year. Social engagement is up 115% year-over-year and brand postings are up 9% year-over-year. And each brand post averages 945 likes, 88 shares, and 58 comments.

Adobe advises: “With recent Facebook updates that limit the amount of brand posts a fan actually sees, it’s no surprise that social engagement is outpacing brand posting growth. To increase the relevance of your brand posts, consider adding geo-targeted content.”

Also, The majority of posts by brands contain an image, and these posts produce an engagement rate that’s 600% higher than text-based posts. Videos produce a similar engagement rate as images, but they’re being used much less frequently. By incorporating more video posts, you can differentiate your social marketing while also building engagement.

Embed social media across your company for a more responsive business, more robust reputation and an increase in marketing conversion