Getting to Grips with Google+ Part 1: The success and failure of Google+

Is Google+ really tottering towards an early death or are the rumours greatly exaggerated?

The departure of Vic Gundotra on 24 April saw the social Internet gasp in horror. “Google+ is Walking Dead” asked Forbes. “Google+ Isn’t Dead. It’s Just In A Coma And On life Support” added the Huffington Post.

There has been a lot of chatter about what Google+ isn’t. How it isn’t Facebook, Twitter, Tumblr or Pinterest. How it isn’t for the social masses, but rather the tech elite. So, what IS Google+? What does it offer? Is it still important? And is it really dead?

The expert views are mixed, but nowhere near as dramatic as the headlines above, and nobody thinks the network is anywhere near dead.

“Did Apple die along with Steve Jobs? No,” says Richard Eliason, author of 50 Things To Do On Google+ Right Now, “I can’t see the same happening with Google+ any time soon. As good a leader as Gundotra was, Google has a huge talent pool to fill the void. The idea of Google+ is bigger than one man.”

Eliason points out that both Larry Page, Google’s CEO, and Vic Gundotra have active Google+ pages, hardly a sign that the social platform is winding down to a dramatic close.

Amanda Kouwenhoven, head of engagement at Axonn Media, adds, “We’ll no doubt see some changes on the social network, but its strong ties to SEO and the value of the data that the network generates, mean that it is very unlikely that it will just die.”

Google+ has been so heavily integrated into the services offered by the technology giant that it is now as much a part of the infrastructure as the bones are a part of the body. In his feature “Why Google Plus Will Not Die”, author Mark Traphagen says, “Dismantling Google+ would be more like ripping out a person’s central nervous system.” And he couldn’t be more right. Everything within Google+ is interconnected with everything else: Gmail, AdWords, Google Places, Google Search, YouTube.

Gayane Margaryan, Online Communications Associate at the African Wildlife Foundation, says, “The impact of Vic Gundotra’s departure remains to be seen and while no-one is denying there are major changes in store for G+, were these planned prior to his departure or triggered by it? One thing is certain, there is to be a major shift and overhaul for Google+.”

Google+ what art thou

As pointed out earlier, it seems far too many people are determined to shove the network into a box that fits with the Facebooks and Twitters of the world, without looking at what the network actually offers outside of the traditional and the expected.

“Some of the biggest benefits of Google+ are: extra reach through sharing your content with followers and communities and improved SEO performance, extra visibility for your brand by presenting yourself professionally alongside your material both in Google+ and in search results, and increased opportunity to network with industry influencers,” says Daniel Booth, Marketing Manager at Jelf Small Business. 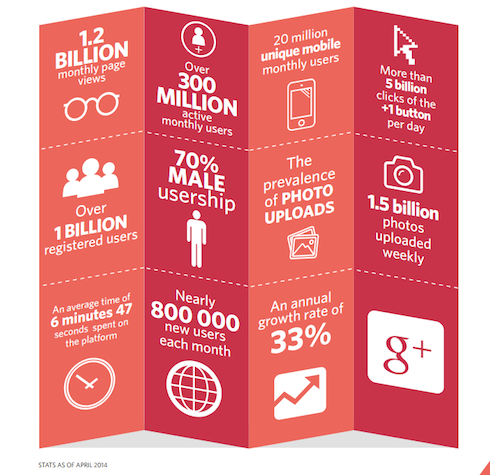 The infographic above shows statistics as of April 2014 and a social network that’s thriving with 1.2 billion monthly page views and over five billion +1 clicks a day with nearly 800,000 new users each month.

“Everyone talks about the defects of G+ as a social network and how nobody is using it,” says Margaryan, “It is, first and foremost, a way to boost your search rankings. Just last year the Moz Data Science Team measured correlation between Google +1s and higher rankings and, after Page Authority, found that the URL’s number of +1s is the most highly correlated factor with search rankings.”

Margaryan believes that Google+ should be used for SEO as your posts are crawled and indexed almost immediately, offering up real-time search to discover new content and links.

Francois Muscat, Internet Marketing Consultant at WSI, says: “It’s an online medium that makes connections and engagement with like-minded individuals easier. I know you can say that about any social network, but the integration of Google+ into all of their products is the key. They’ve made a good job of always being connected to Google+ and no other social network features this rich integration.”

For Muscat the hot feature of Google+ is Google Hangouts as it is a transparent means of communication. Social media can hide who you are and this puts a face onto the business and makes it far more personal.

One of the key elements to consider here is not what Google+ cannot do within the sphere of social media. Use Facebook, Twitter, Instagram and Pinterest. Google+ isn’t designed to replace them or supersede their niches.

He adds that this social network is built in such a way that it helps the savvy business find new customers through community interaction between brand pages and individuals. There is no need to Like a page to interact with it and, as mentioned earlier, it opens up alternative mediums for communication through videoconferencing with Hangouts.

That said, it isn’t all shiny and wonderful. Julia Louw, Head Creative Imageer at Troika Imageering Works says: “Those who don’t use Google+ are often surprised to hear that it has more than a billion users. The figure is composed in large part of users who are funnelled into the sign-up process when they try to engage with other Google-owned serviced. The main benefit for brands on Google+ isn’t their exposure to users; it’s the fact that once you’re playing nicely in the Google sandbox, Google will thank you with improved integration into their universe – crucially your search engine rankings.”

Whether you want to see Google+ as the sneaky cousin of the evil overlord or a realm in which you can actively build your brand it is pretty clear that the network is nowhere near dead. Now is the time to engage with your network and be ready to take advantage of the upcoming changes so your brand is the one with the hits, the follows and the rankings. And next week, we will find out how.

Happy Birthday Google+
Getting to Grips with Google+ Part 2: The business case for Google+
Looking Forward to 2014
The Wednesday Update including: Google+ gets visual, marketers continue to embrace social but Facebook continues to disappoint
The Corporate Social Media Summit New York 2014