The government of Guyana, that has seen within the past two decades an increase in per-capita income of over five times thanks to new hydrocarbon developments, announced in late 2022 that it has taken steps to develop a downstream oil and gas industry including a power generation plant and a crude oil refinery. 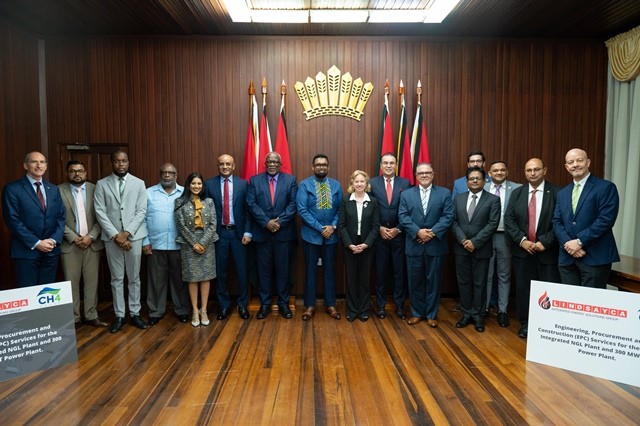 Mohamed Irfaan Ali, 42, who is president of Guyana since 2020, signed on Dec. 14, 2022 a contract for the construction of a 300-megawatt power plant in an integrated facility with a Natural Gas Liquid (NGL) plant with costs estimated at about $759 million.

“This is the largest project that we would have embarked on as a country, and that brings with it its own challenges,” President Irfaan Ali was quoted as saying in a statement released by the government headquarters in Georgetown.

He said the investment aims at unlocking “enormous potential” in Guyana, a country that became independent in May 1966.

Building power generation capacity would be the first steps of development for a nation as industries need an established power grid that they can connect to get power to run any machinery.

As of 2021, Guyana had a population of just under 800,000 people, compared with an estimated 29 million, as of 2021, in neighboring Venezuela. Unlike most of their South American neighbors that speak Portuguese or Spanish, Guyana´s language is English. Guyana is a member of The Commonwealth of the United Kingdom.

Guyana is located in the northeast corner of South America´s mainland. Its per-capita gross domestic product has expanded over five times since the mid-2000s when it was under just $2000 annually, thanks to new oil export revenue.

Close ties to the U.S.

President Irfaan Ali thanked ExxonMobil and praised the U.S. Ambassador Sarah-Ann Lynch as well as the embassy in Georgetown for their assistance.

The agreement “speaks of Guyana’s strong bilateral relations,” said Irfaan Ali, who is the second Muslim to have been elected president in the Americas after Noor Hassanali , former President of Trinidad and Tobago during 1987-1997.

The next step, the Guyana president said, is “to move to complete the project on time while focusing on unlocking the other transformative projects that are on the way.”

According to a Reuters News agency report from mid-October, a consortium led by ExxonMobil was producing crude oil at a rate of 400,000 barrels per day. Lacking refineries, Guyana exports all of it.

The government of Guyana has accepted proposals for a 30,000 barrels-per-day refinery to be built at a location near the Barbice River during a period stretching from mid-October to mid-December.

Since Oct. 15, 2022 the government of Guyana is receiving proposals for the finance, design and construction of a refinery to be built in the vicinity of Crab Island, in Berbice.

The government had asked bidders to fill a standard request for proposal (RFP) that “will be used to determine a capable partner that will be selected to work with the Government to complete the project based on (i) the timeframes stipulated, (ii) evidence of financial and technical ability (…)”

“Responses to this RFP must be submitted to the National Procurement and Tender Administration Board by Dec. 13, 2022,” it said at the time.

Other plans for Region Six where the plant will be located include a national training institution to train workers for the oil and gas jobs that will be available, as well as hospitality jobs.

“Oil production has the potential to transform profoundly Guyana’s economy (overall real GDP growth rate is projected to be 57.8% in 2022),” according to a report by the International Monetary Fund.

Guyana’s recoverable oil reserves are expected to reach over 11 billion barrels, one of the highest per capita worldwide.

“This could help Guyana build up substantial fiscal and external buffers to absorb shocks while addressing infrastructure gaps and human development needs,” the IMF added.

Other members of The Commonwealth of the United Kingdom in the Americas and Caribbean listed in its website include:  Antigua and Barbuda, The Bahamas, Barbados, Belize, Canada,  Dominica, Grenada, Jamaica, Saint Lucia, St Kitts and Nevis, St Vincent and The Grenadines, and Trinidad and Tobago.

Countries in Latin America that have found large hydrocarbon deposits in recent decades include Brazil, with large pre-salt findings, that managed the resources through its state owned company as well as Bolivia and Peru, both reporting about 13 Tcf in findings of natural gas in the 1990s but taking very different development paths.  Argentina has also seen discoveries, mainly shale oil, held by state owned YPF.