Amid a more than year-long U.S. - China trade war and growing capacity, U.S. producers have sought and found new routes for chemical exports. 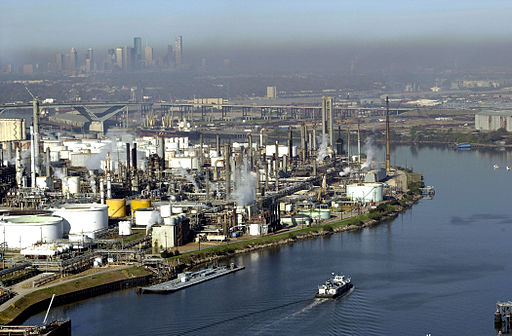 New capacity on the U.S. Gulf is finding alternative export destinations amid a one-year long trade war with China.

The First Wave of massive investment allowed for tremendous new petrochemical capacity to come online in the U.S. The expectation was that the new material would go to China. Then, global trade conflicts developed, spurring new export destinations for U.S. material.

The Trump administration levied punitive tariffs on $250 billion worth of Chinese products last year while China has imposed retaliatory tariffs on $110 billion in U.S. goods. China’s tariffs on American products include a wide swath of petrochemicals, specialty chemicals and plastics. The list includes chemicals such as polyethylene, polyvinyl chloride (PVC) and polycarbonates.

Many of these products increased in capacity during the First Wave of investment.

Adding to the fire, the Trump administration in August reignited the trade battles with China by announcing new 10% tariffs on an additional $300 billion worth of Chinese exports not already covered by earlier rounds of tariffs.

In response, China retaliated by slapping 5% to 10% tariff on $75 billion of U.S. imports, some of which took effect on September 1. The second phase of tariffs is slated to be effective December 15.

And on it went. The U.S. retaliated again by raising the tariffs on $300 billion of Chinese goods from 10% to 15%, some of which went into effect on September 1. The U.S. administration also increased tariffs to 30% from the existing 25% on $250 billion in Chinese imports.

The ACC previously said that the total value of U.S. chemicals and plastics imports from China subject to tariffs would reach $26.4 billion should the new round of tariffs come into effect.

China is one of the biggest export markets for U.S. chemicals, leaving the American chemical industry heavily exposed to Beijing’s retaliatory tariffs and putting chemical exports at risk unless suppliers can find alternative destinations.

The investment in U.S. polyethylene (PE) has already resulted in the addition of over 4.5 million tonnes/year of new capacity since 2017. At least 30% of that new capacity is marked for export.

The new capacity spurred by new construction is far from over. A lot more is coming. Another 7 million tonnes of PE is planned, or under construction.

In total, U.S. producers are expected to add 12.1 million tonnes of PE before 2022, according to ICIS. 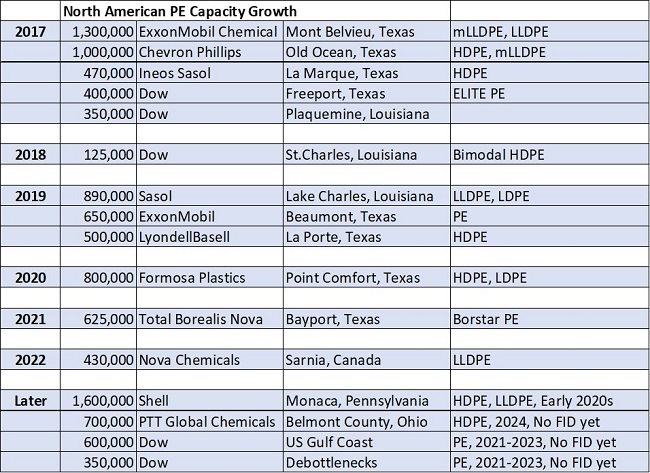 U.S. PE production has already exceeded domestic demand and will now add more than 6 billion pounds of excess inventory for export through 2020, according to Petrochemical Update’s U.S. Polyethylene Export Report.

Exports are now critical in the oversupplied U.S. plastics market and will become even more significant in the next few years as additional capacity comes online.

The top U.S. Chemical export partners in order of volume are Canada, Mexico, China, Belgium, and Brazil, according to U.S. Customs data and the ACC.

While PE shipments to China in 2019 have dropped sharply, with high density polyethylene (HDPE) from the U.S. down more than 50% through July, PE exports in total, have actually increased by double-digit percentages since the tariff battle began mid-year 2018, according to U.S. customs data.

Vietnam, Belgium and Malaysia have been the top consumers of U.S. HDPE for the first half of 2019, according to customs data.

Besides polyethylene, other major export gainers in chemicals during the first half of 2019 include methanol, styrene and ethylene glycol (EG). All of which were the targets of Chinese tariffs.

U.S. methanol shipments exports climbed more than 80% during the first half of the year, following new plants coming online in Texas and Louisiana.

Among the top three destinations for methanol in 2019 are South Korea, Mexico and the Netherlands. Prior to the Trade War, China was in the top three.

For EG exports, Mexico is now the top destination, followed by Belgium. China, which used to be first, now ranks third, taking less than half of the EG shipments sent to Mexico.

Ahead of trade meetings set to take place in Washington in early October, news recently emerged about a possible interim agreement to ease trade tensions between the U.S. and China.

Trump administration officials discussed offering a limited trade agreement to China that would delay and even roll back some U.S. tariffs for the first time in exchange for Chinese commitments on intellectual property and agricultural purchases.

China then said it will exclude 16 products from a 25% additional tariff on US goods for a year starting from September 17, 2019 to September 16, 2020, the Customs Tariff Commission of the State Council said in a statement.

The Chinese government shared the first list of such exemptions and more are expected to come. The listed products are mostly covered in China’s tariffs on $16 billion of US goods enacted from August 24, 2018.

The Trump administration still plans to extend tariffs to virtually all imports from China in December.

Meanwhile, ratification of the U.S. Mexico Canada Agreement (USMCA), has yet to pass putting U.S. exports to Canada and Mexico at risk. USMCA is intended to replace the 1994 NAFTA agreement.

The U.S. chemical sector has capitalized on duty-free trade under NAFTA ever since its inception, more than tripling U.S. chemicals exports to Canada and Mexico – from $13 billion in 1994, to $44 billion in 2018. Chemical exports are projected to grow to $59 billion by 2025, the ACC said.

While manufacturers have found a home for U.S. exports for now, there is still much more capacity coming online as the Second Wave of construction is well underway.

The ACC has warned that global trade conflicts could halt investment.

“Growth rates in U.S. chemistry over the next five years are expected to surpass average growth over the previous 20 years,” said Martha Moore, senior director of policy analysis and economics at the ACC said. “Provided that access to export markets remains open to our producers, expanding global demand will be met by shale-advantaged chemistry sourced from the U.S.”

To date, 334 chemical and plastics projects cumulatively valued at $204 billion have been announced, with 53% of the investment completed or underway and 40% in the planning phase, according to the ACC.