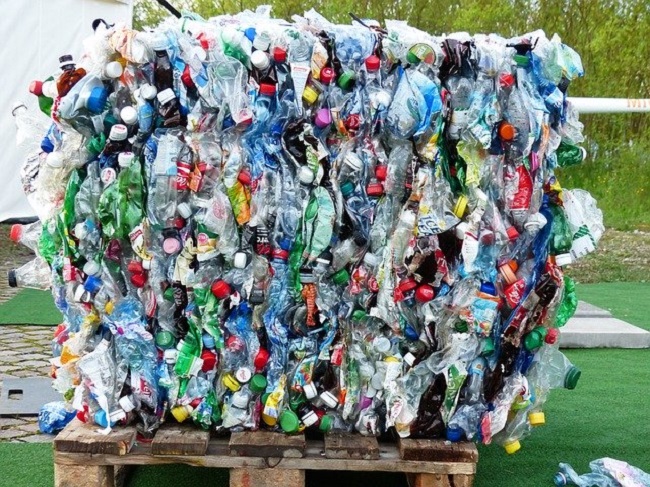 A bale of used PET, or polyethylene terephthalate. Bottle caps are usually made of polypropylene or polyethylene. Image courtesy of Hans Braxmeier, Pixabay

The International Council of Chemical Associations said on Dec. 2, 2022 that its members met in Punta del Este, Uruguay for a week to negotiate an agreement with the goal of reaching binding accords and coordinating the so-called “circular economy” for plastics.

The international council of chemical associations said it “remains supportive of a legally binding agreement to eliminate plastic waste in the environment and is optimistic of the direction of negotiations towards achieving this goal.”

Planned work for the group includes ongoing promotion of “a circular economy for plastics, where used plastics are captured and remade into new plastics” and also designing products to ease this path.

Part of the aim is enabling partnerships between the private sector and governments to “unlock financing to improve waste management.”

At INC-1, as the meeting was called, “nations and stakeholders raised concerns about chemical additives in plastics,” it said.

The meeting was hosted by the government of Uruguay and the United Nations.

According to a report from Phys.org from Feb. 1, 2020, citing a specialist from a local recycling firm, at the time only about 35% of the used plastic that was collected post-use in Uruguay was intended for recycling with only 12% of that volume ever reaching recycling plants.

Uruguay has one of the highest recycling rates in the region. Countries across the Americas have taken actions including bans on some plastics in an effort  to reduce plastic waste.

Houston-based Lummus Technology said on Dec. 16, 2022 in a statement that it “will move forward in its first commercial deployment” of a crude-to-chemicals technology that the company says can be used to maximize either olefins or aromatics yields.

S-Oil’s new plant (in South Korea) with three million tonnes per year of capacity will deploy several Lummus and Chevron Lummus Global (CLG) technologies to process crude to produce ethylene, propylene, butadiene and other chemicals. Upon completion, the plant will have an annual production capacity of about three million tonnes of chemicals.

Unlike any other crude-to-chemicals technology, TC2C processes low-value refinery streams such as slurry and pyrolysis oil.

The technology “can be tailored to maximize olefins, aromatics or any combination,” according to the statements.

Saudi Aramco is the majority shareholder of S-Oil. In 2018, Saudi Aramco Technologies Company, Lummus and CLG entered their agreement to market the technology.

A projected rise in consumption by households and industry of shale gas will result in a fast expansion of the market for dry natural gas, or methane, according to research by Transparency Market Research published on Dec. 7.

The global natural gas dry market may expand at a rate of just over 7% annually through 2031, it said.

Dry gas, or methane, is what remains after all impurities have been removed from natural gas, such as liquid or gaseous hydrocarbons including octane, hexane, and others, as well as non-hydrocarbons such as nitrogen or helium.

Dry natural gas is widely used in cooling and heating applications, as well as electrical power generation, across the world.

“Vehicles can run on compressed dry gas. Natural gas supply is safe, readily available, and cost efficient (…) the demand for dry natural gas is steadily increasing, while conventional gas has been declining rapidly. This is projected to bolster the dry natural gas industry during the forecast period,” it said.

“Natural gas can be used for multiple purposes such as cooking, heating water, and space heating, and for providing energy to appliances in homes,” it said.

Its use as an alternative fuel will reduce carbon emissions, which in turn is anticipated to help the dry natural gas market in the near future, according to the release.

Some key drivers of the market include a demand increase in electricity across all the three sectors such as industrial, residential, and commercial.

The continuous rise in the need for electricity “will boost the demand for dry natural gas. This presents significant market opportunities in North America during the forecast period,” it said.

“Furthermore, joint ventures, collaborations, and merger and acquisition strategies will enable players to boost market share during the forecast period,” according to the report.