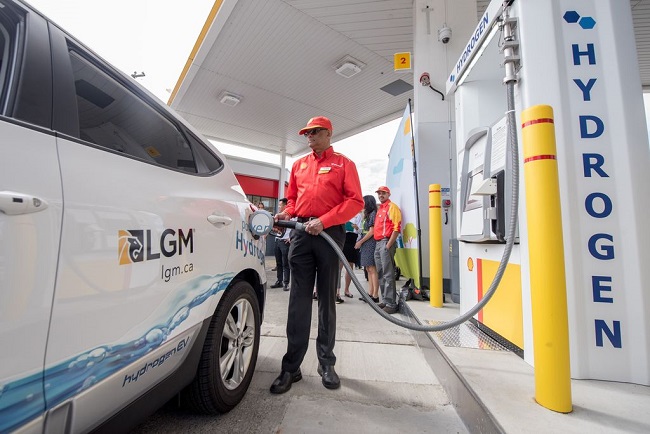 Alberta is Canada’s largest producer of petrochemicals “but we aim to reach higher and become a top global production powerhouse,” he said.

Under the program, “companies investing in new facilities or expanding existing ones can receive 12% of their eligible capital costs back as grants once the facility is up and running,” he said.

Unlike a previous program in place, this makes it “easy for companies to factor in to their return on investment calculation” while also protecting Albertan taxpayers, he added.

The new incentives replace a system of credit grants under which companies had to apply and qualify. The previous program also placed a limit.

“All projects will receive funding once they are successfully built and operational,” he said.

“Unlike the previous incentive program, our government will not use a petitional evaluation process,” Nally added.

“Early last month we launched our natural gas vision and strategy which comprehensively outlines our focus for the natural gas sector,” Nally said.

“Given our enormous reserves of natural gas, over 200 trillion cubic feet of potential recoverable gas, it is vital for Alberta to have a plan,” he added.

Despite the hydrocarbon abundance, investment in Alberta to develop petrochemical plants has lagged far behind that which went on in the United States Gulf Coast.

The Alberta Petrochemical Incentive Program is an attempt to make future projects in Alberta more competitive by offering a direct cash incentive.

Despite an impact in 2020 from lower hydrocarbon prices, Alberta must make an effort to offer that incentive.

Western Canada crude oils are heavy grades that sell at a deep discount to lighter crude oil grades such as West Texas Intermediate. Markets are relatively distant which requires transportation of the heavy grades.

Western Canada has also seen a progress slowdown in projects to process and ship liquiefied natural gas (LNG) to Asia with some running slower than projected and others canceled.

Covid-19 impacted hydrocarbon demand both in 2020 as well as the consumption projected for coming years. This has led to decisions to postpone investment decisions.

The reduced demand and weaker economic growth has led to project deferments. In Alberta, Pembina Pipeline and Kuwait’s Petrochemical Industries Company (PIC) deferred one of the two biggest petrochemical companies not only in Alberta but also across Canada. The deferment occurred in March. The Final Investment Decision announcement had been made in February 2019. A decision on whether to eventually proceed or not is pending.

Given the context, Alberta must offer incentives, Nally said. “We cannot afford not to,” he added.

Bringing investment to Alberta “is only possible if we have an attractive incentive program that competes or outcompetes” those offered by other jurisdictions, Nally said.

“APIP also has the potential to be a catalyst to drive another burgeoning sector, hydrogen,” Nally said.

“That is why we also made facilities producing hydrogen eligible for the program,” he added.

“This clean fuel has been gathering a lot of attention lately,” he said. Alberta is already one of the largest producers in the planet with over 5,000 tonnes of hydrogen produced each day, he said.

“Currently it is mostly for industrial uses. However, in the next ten years our intention is to be able to have a large scale clean hydrogen producer employing this fuel in various commercial applications across our economy and by 2040 we intend to be a global exporter of clean hydrogen and hydrogen-derived products across the globe,” he added.

“Our early investment in carbon capture utilization and storage means we already have an initial infrastructure to capture emissions resulting from a hydrogen production process,” he said.

“These two elements, the low cost natural gas and the ability to capture carbon, mean we have the potential to become a world leader in hydrogen production,” Nally said.

“Another key facet of our national gas strategy is to become a regional leader in developing a true circular economy for plastics. Each year there are billions of dollars in plastics that go to waste instead of being recycled,” he said.

“We are aiming to become the leading jurisdiction in Western North America when it comes to responsible use and recycling of plastics,” Nally added.

“With a strong plastics industry, which will be supported by APIP, also come opportunities for greater economies of scale which will help make a vast chemical recycling process more economical,” he said.

“That, in turn, can result in a positive feedback cycle where we draw more recycling, further strengthening our plastic sector,” he added.

Canada’s federal government announced in October a ban on six commonly used plastics starting at the end of next year. The country is finding ways to reduce plastic waste.

Canada’s Pembina Pipeline said that the Alberta incentives may help toward a positive decision to bring back the propane de-hydrogenator and polypropylene project known as CKPC that was deferred earlier this year due to Covid-19 uncertainty.

“It's certainly helpful when we think about CKPC, which will be providing an update for in early December,” said on Nov. 6 Michael Dilger, Pembina’s CEO, referring to the C$4.5 billion project near Edmonton, Alberta.

CKPC (Canada Kuwait Petrochemical Company) is an equal venture of Pembina and Kuwait’s Petrochemical Industries Co. Both boards of directors need to give approval to continue.

As for hydrogen possibilities, “clearly, we have infrastructure that that can be used in that development. But it’s really early days for us. We think it's a number of years away,” Dilger said.