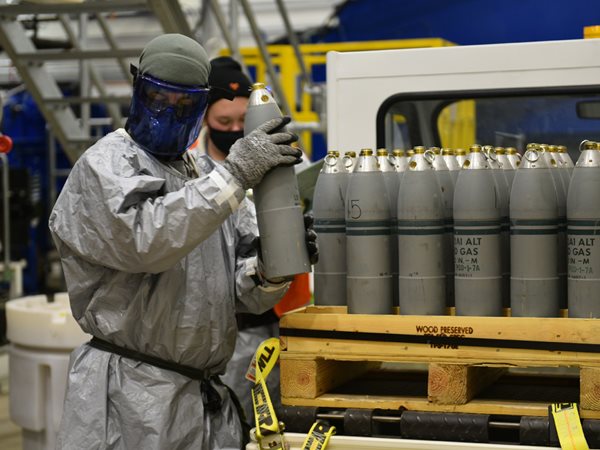 Bechtel has started the last part of its efforts to eliminate U.S. chemical stockpiles. Image courtesy of Bechtel.

The Reston, Virginia-based engineering and construction company Bechtel said on March 1, 2022 that it will begin the final phase of its efforts under contract to eliminate U.S. mustard gas stockpiles that will be completed in Sep. 2023.

“After years of work and preparation in getting the SDC (Static Detonation Chamber) units up and running, it is gratifying to be on our way with destruction of the third and final campaign,” said Todd Ailes, project manager, Bechtel Pueblo Team.

Bechtel, known for its role behind engineering and construction of multiple petrochemical and other projects, has been destroying chemical weapons stored at the U.S. Army Pueblo Chemical Depot since 2015.

The electrically heated vessels detonate the munitions, “and gases are treated by a pollution abatement system,” Bechtel said.

Destruction started after the 1997 ratification of chemical weapons treaties. Bechtel leads contracted teams for work in the U.S. two remaining stockpiles in Pueblo and near Richmond, Kentucky.

The stockpile sites in Colorado and Kentucky account for the last 10% of what was originally a national stockpile of over 30,000 tonnes of chemical weapons in seven sites.

Both sites are on target for destruction by Sept. 30, 2023. American law mandates stockpile destruction before the end of 2023.

Mustard gas started to be used during the first world war as it could penetrate masks and any clothing materials available at the time.

According to The Smithsonian Magazine Sep. 2020 issue, in 1943 during a German bombardment of the Italian port of Bari one of the ships hit, later identified as the John Harvey, had been carrying a cargo of mustard gas. Medical investigations of burnt sailors and servicemen discovered that when mixed with nitrogen it had selectively melted lymph nodes and blood cells.

This gave way to more research and medical uses of "nitrogen mustard" like chemotherapy. The difference between “mustard gas” and “nitrogen mustard” lies in a sulfur atom that replaces a nitrogen atom.

The global trade in liquefied natural gas (LNG) increased 6% to 380 million tonnes during 2021 as many countries recovered from the Covid-19 pandemic, according to Shell’s latest annual LNG Outlook published on Feb. 21, 2022.

The U.S. will become the world’s biggest LNG exporter in 2022, according to the report.

Brazil tripled its LNG imports during 2021 to over seven million tonnes as persistent dry weather led to weaker hydropower generation.

Additional heavy crude supplies from Canada and countries within Latin America could replace imported Russian crude but it will not be “as cost effective as Russian imports, particularly heavy fuel oil,” the AFPM said.

“Our refineries in the U.S. Gulf Coast import heavier crude and unfinished oils from Russia,” it said. Gasoline and diesel represent only a small part of Russian imports to the U.S., largely going to the East Coast, it added.

Since 2019 U.S. refineries have increased imports of unfinished heavy oils from Russia to help replace heavy sour crude from Venezuela that U.S. refineries could no longer import. The U.S. banned Venezuelan imports in 2019 and has sanctioned transportation companies for moving Venezuelan crude.

Oil prices had been projected to remain below 2021 peaks during this year. However, prices have surged since Russian military forces entered Ukraine on Feb. 24.

On March 8 the U.S. imposed sanctions against Russian crude and fuel imports along with other nations. Venezuelan President Nicolas Maduro said on the same day that official delegations from the U.S. and Venezuela had held a meeting and talks would continue.

The U.S. Chemical Production Regional Index expanded by 0.4% in January slowing from a 1.4% gain in December, according to data from the American Chemistry Council released on Feb. 28.

Chemical output rose in all regions with the largest gains in the Midwest and Gulf Coast, according to the ACC.

“These gains were offset by weakness in the output of synthetic rubber, manufactured fibers, plastic resins and other specialty chemicals,” the ACC added.

Manufacturing output expanded for a seventh month in January. It increased by 0.3% considering a three-month moving average.