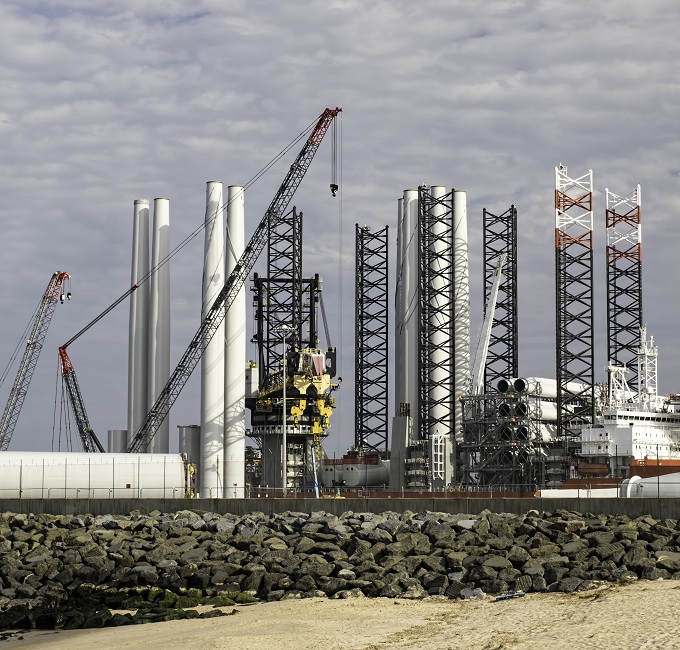 European innovations have improved wind farm designs and installation methods but the lack of a U.S. wind supply chain remains the greatest barrier to lowering the cost of East Coast projects.

A research team led by the University of Delaware has developed a cost-saving offshore wind installation process which uses a tripod jacket with suction buckets and full-assembly onshore to leverage gains from increasing turbine capacities.

This process could reduce capital costs by up to 37% compared with current piled jacket systems, using a crane vessel to install a larger turbine structure in only one operation, reducing installation time and costs, the study said.

The research used turbines of capacity 10 MW, which should soon be available, and the method could be scalable to turbines of up to 20 MW. Turbine capacities are rising fast-- leading offshore developer Orsted has predicted turbines of 13 to 15 MW will be on the market by 2024.

"Perhaps most important, the processes in our proposed method are amenable to industrialization of the offshore wind production process, with attendant increase in volume and lowering of cost,” the research study said.

“The assembly process is like mass production in a factory, unlike today's practice which is like site building a single-family home," it said. 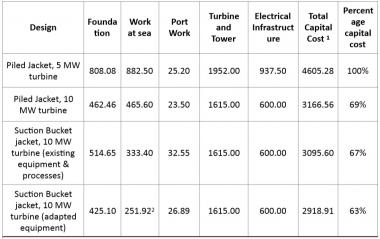 The proposed onshore assembly method could accelerate the deployment rate of projects to 1,000 MW per construction season per port, in comparison to a current rate of 400 MW per one to two construction seasons, Willett Kempton, lead researcher on the project and professor in the College of Earth, Ocean and Environment at the University of Delaware, told New Energy Update.

As the process differs significantly from current industry practices, a demonstration project consisting of two turbines would be a critical next step, Kempton said.

"That is needed before any finance and risk assessment team would consider doing a full project with this new method,” he said.

The researchers developed the installation method for a site in the Mid-Atlantic Ocean, but it could be applied to much of the offshore area currently leased or under consideration for development in the U.S.

Jacket designs are emerging as a preferred solution for offshore wind projects in the U.S., boosted by experience gained on oil and gas projects in the Gulf of Mexico, Chris Wissemann, managing director of New Power Ventures, told New Energy Update.

Jacket components weigh less than monopiles, allowing the use of smaller vessels for installation, and are more cost-effective for larger turbines and at deep water sites, he said.

Boone Davis, principal at Renewables Consulting Group, sees significant cost savings in the design and installation concept proposed by the study, but said the model will need to be proven before developers are willing to accept the risks.

“The main risks associated with this method are connected to the use of a caisson-bucket (suction bucket) design, which requires specific site ground conditions and has a limited track record,” he said.

The proposed use of a shear-leg crane barge to carry the entire structure to sea also needs to be tested before it is widely accepted, Davis said.

“If the special blade rack on the tower, or lifting equipment within the nacelle, does not work as planned, a jack-up vessel may be needed,” he said.

Andy Geissbuehler, managing partner with Renewable Resources International, argued that the wide adoption of this new installation process at this time could prevent the nascent U.S. offshore wind industry from benefiting from European cost reduction measures.

In the early stages of Europe’s offshore wind market development, the supply chain was relatively inexperienced and companies adapted existing technologies and vessels. A stable pipeline of U.S. projects should spur a faster buildout of the supply chain than in Europe, Julia Bovey, director of External Affairs at New York-based offshore wind developer Empire Wind, said.

“A steady flow of projects to fill ongoing demand for clean energy would create the kind of market confidence that leads to big investments, so one day the ships we need could be right here in New York,” Bovey said.

Empire Wind, owned by Statoil, is in the early development stage of a 1 GW-1.5 GW project within a leased area of 79,350 acres located off the southern coast of Long Island. Project construction is expected to start in 2023 and the plant is due to be fully operational by 2025. By that time, much larger turbines will be available.

“The main driver of cost reduction is economy of scale …. The larger the project, and the larger the turbines we can use, the lower the price of the power we produce,” Bovey noted.

“For now, we’ve broken down all aspects of building the project into the most basic parts, and are trying to match local suppliers with our needs,” she said.